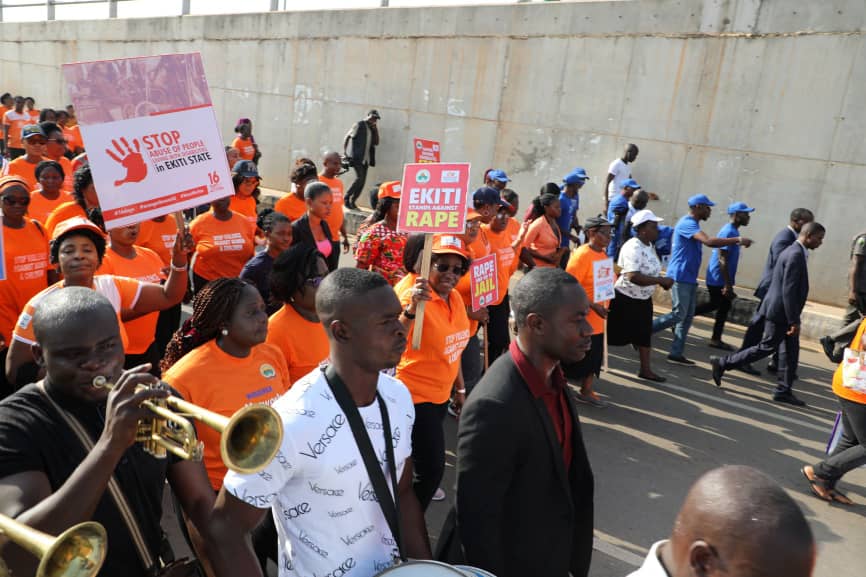 Ekiti State Government through the Ministry of Women Affairs and Social Development; the Office of the First Lady, Erelu Bisi Fayemi; Civil Society Organisations, and Non-Governmental Organisations including the Nigerian Professional Working Women (NPWW) Ekiti State Chapter, joined the ongoing nationwide 16 days of Activism to tackle Gender-Based Violence by staging a Walk in a bid to sensitize the people of the State.

Significantly, the Walk, led by the First Lady, Erelu Bisi Fayemi, is organized to commemorate the United Nations effort on curbing Sexual Domestic Violence, Female Genital Mutilation, amongst other social vices militating against the development of the Girl-Child.

According to the Wife of the Governor, Erelu Bisi Fayemi, Ekiti State will continue to be at the forefront of advocacy, orientation and sensitization of Ekiti people, letting them understand the danger and consequences of engaging in acts that demoralizes women and children in the State.

She also mentioned that the state is currently ensuring the implementation of policies and laws that prohibits various acts of domestic violence, rape and female genital mutilation in the State.

Representative of the NPWW Ekiti state chapter said that Ekiti State has remained a role model State in championing the cause to fight against the scourge of domestic violence and other related unlawful practices. Also affirmed was that the NPWW is birthed to ensure due propagation of women’s rights, empowerment and promotion of societal values through work ethics and equal opportunities.

From Favorite To Suspect, Joshua Faces Mettle Test in Rematch
Anthony Joshua Brings His Mother, DJ Cuppy To Watch His Fight For The First Time
To Top
error: Content is protected !!