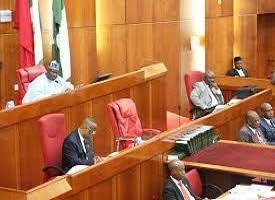 The Senate on Wednesday mandated three of its standing committees to investigate the reason behind the abandonment of the Badagry/Sokoto Expressway for over 40 years.

This happened as the Senate President Ahmad Lawan urged the Federal Government to explore the option of Public Private Partnership (PPP) to complete the road project.

The Senate Joint Committee on Works, Finance and National Planning and Economic Development was directed to inter-face with the Ministry of Works, Federal Road Maintenance Agency (FERMA) and other relevant stakeholders to determine why the Badagry-Sokoto Expressway has been abandoned for such a long time.

The Joint Committee is also to work out a permanent and sustainable solution for the completion of the project and to report to the Senate within two weeks.

The upper chamber urged the Federal Government to initiate a process to complete the road through PPP arrangement.

These resolutions of the Senate followed its consideration of a motion titled: “Need for the construction of the Badagry/Sokoto Expressway to promote economic growth and development.”

Lawan said: “The Federal Government does not need to provide funding for all the roads in Nigeria. There are some roads that we can do through PPP arrangements.

“But government is supposed to construct some roads especially those that may be termed not economically viable because if you neglect them the people in communities in such areas will never see any economic prosperity.

“But some of the roads like this one is a major road and there will be a lineup of investors wanting to invest. So we should encourage the executive arm of Government to come up with a proposal on how this road will be funded.

“It does not have to be wholly funded with federal government resources because we don’t have the resources really.

“But since we have companies that are willing, we should provide the legislative support for such companies to feel that when they invest, their investments will be profitable.

“We should push for this road to go through the process of PPP because it is a very important road and I am sure we will have a multitude of investors who would like to invest.”

Senator Umar in his lead debate urged the Senate to state that the Badagry-Sokoto Expressway is a Federal Government road which connects 12 states.

The states, he said, include Lagos/Badagry, Ogun/Agbara, Oyo/Abeokuta, Kwara, Niger, Kebbi and Sokoto at the national level, with Benin, Togo and Niger at the International level.

In addition, according to him, the road is the Nigerian section of the TransWest Coastal Highway project meant to link 12 West African coastal nations.

He said that the Senate is aware that the project was initiated as part of 4th National Development Plan, which was “commenced by the General Olusegun Obasanjo regime in 1978, but was abandoned in 1979 (Over 40 years now) after he handed over power to Alhaji Shehu Shagari.”

He added: “Further aware that the original conception of this expressway was a linkage road between the North and South Nigeria and some West African countries through Seme Border; to ease carriage of goods across the borders as well as one of the largest industrial hubs in the country, the Agbara Industrial Estate.

“Cognizant that in 2009 the Federal Government in collaboration with the Lagos State Government started the reconstruction and expansion of the Lagos-Badagry part of the Badagry-Sokoto expressway, from 6 to 10 lanes, prompting economic development around the area, but the project was abandoned due to lack of fund, thereby affecting these economic activities negatively.

“Further cognizant that in 2019, the Federal Government in collaboration with the Lagos State Government resumed the reconstruction of the Lagos-Badagry part of the Badagry-Sokoto expressway but nothing is being done to construct the rest of the express way.

“Assured that the road if constructed will boost food and agricultural production and connect these rural communities to major urban corridors, a necessary condition for improved agriculture value chain.

“The connection to urban corridors will increase off season employment for rural youth and sustain youth employment and employability.

“Further assured that the proximity to western neighbours of the country, will improve cross border market and international trade and help advance Nigeria’s commitment to regional and continental trade; and

“Convinced that the construction of this road will add to the number of North South roads, enhance the durability of the roads, reduce distance and help integrate the western flack of the country into national roads and help integrate the western flank of the country into the national road structure with strong implication for national integration and development.

“The Western and Eastern flanks of the country are the least integrated in terms of road network and therefore the poorest using disaggregated national data.”

Senators in their contribution supported the motion.