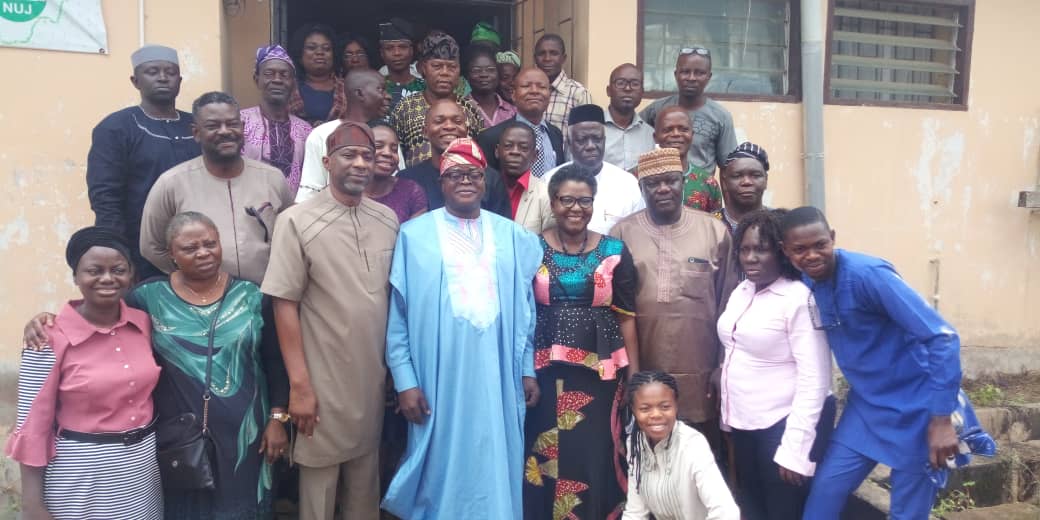 The immediate past Director of Information Services (DIS) in the Ekiti
State Ministry of Information, Tourism and Values Orientation, Prince
Sunday Aribatise, has been described as a thorough bred professional
whose focus was the noble ideal of bequeathing a legacy of hard work
and service to subordinates.
The Commissioner for Information, Tourism and Values Orientation, Aare
Muyiwa Olumilua, gave this indication while speaking at the retirement
ceremony organized by the Ministry for Prince Sunday Aribatise, who
retired from active service.
Aare Olumilua, who expressed his admiration for Prince Aribatise’s
spirited attitude to work and life, said it was important to be
acquainted with an individual before forming an opinion about such a
person.

He added that within the short period of working closely with Prince
Aribatise as the acting Permanent Secretary of the Ministry, he
realized that the former Director is a down-to-earth professional.
The Commissioner, who described the Director’s retirement as a
bitter-sweet experience, explained that it is bitter because he has to
exit the service he has being very much used to in these past years
compulsorily, but sweet because he was leaving on a very good note and
in good health.
He further appreciated his contributions towards the progress and
success of the Ministry.
In her own remarks, the Permanent Secretary in the Ministry, Dr.
(Mrs.) Adekunbi Obaisi, who described Prince Aribatise as a diligent
officer who gave his best while in the service, urged the former
Director to sustain his amiable personality and make service to God
and humanity his primary focus.
Speaking on behalf of other Directors, Mrs. Sola Fadiran and Mr. Segun
Olatoye of Departments of Values Orientation, and Planning Research,
Statistics of the Ministry respectively described Prince Aribatise as
a cool headed and candid boss who rarely gets annoyed and was
committed to running an open-door style of leadership.
While expressing his gratitude to the Ministry for organizing a
befitting send forth for him and to the Ekiti State Government that
gave him the opportunity to serve, Aribatise urged all the staff of
the Ministry of Information, Tourism and Values Orientation to
cooperate and support the current leadership of the Ministry.
Meanwhile, another send forth ceremony organized by the forum of
Information Officers has been held for Mr. Aribatise. The ceremony,
which was held in the Newsroom of the Ministry was attended by the
Hon. Commissioner of the Ministry, Aare Muyiwa Olumilua, the Permanent
Secretary, Dr. (Mrs.) Adekunbi Obaisi, and the Special Assistant to
the Governor on New Media, Mr. Biodun Borisade.
Speaking at the ceremony, the Commissioner for Information, Tourism
and Values Orientation, Mr. Muyiwa Olumilua said he was amazed at the
numerous encomium showered on the retiree by members and non-members
of the information family.
Mr. Olumilua described the former Director as a man of many positive
parts, whom he noted within the short time they worked together have
greatly impacted on the Ministry.
He urged him to maximize the new phase of life he just started by
engaging in profitable ventures, enjoying life and engaging in
activities that will rejuvenate his body system.
In her remarks, the Permanent Secretary in the Ministry, Princess
Adekunbi Obaisi who described the former Director as a bold and
courageous man who remained undaunted in the face of life challenges
urged him to see his retirement as a period of rest and time to relax
and enjoy the fruit of his labour, praying for his continued success.
Earlier, Information Officers including Director Social Mobilization,
SUBEB, Mr. Tope Babalola, Director, Values Orientation, Mrs. Sola
Fadiran, Prince Charles Ademolaju, Prince Adekunle Adeniyi, Mr.
Abiodun Olofe amongst others and a veteran journalist and retired
officer of the Ministry , Mrs. Ebun Famubode, had eulogized the former
Price Sunday Aribatise for his accessibility, openness and
accommodating nature.
The Chairman, Planning Committee of the Event, Ms. Omolara Alokan in
her welcome address, expressed appreciation to all Information
Officers and other officers of the Ministry who contributed to the
success of the programme.
Responding, the former Director of Information Services, Mr. Sunday
Aribatise who was overwhelmed by the numerous encomiums showered on
him, expressed appreciation to everyone who celebrated him.
He urged all Information Officers to keep on being diligent, resilient
and relentless at work until their best is attained.
The high point of the event was the presentation of gift to the former Director.