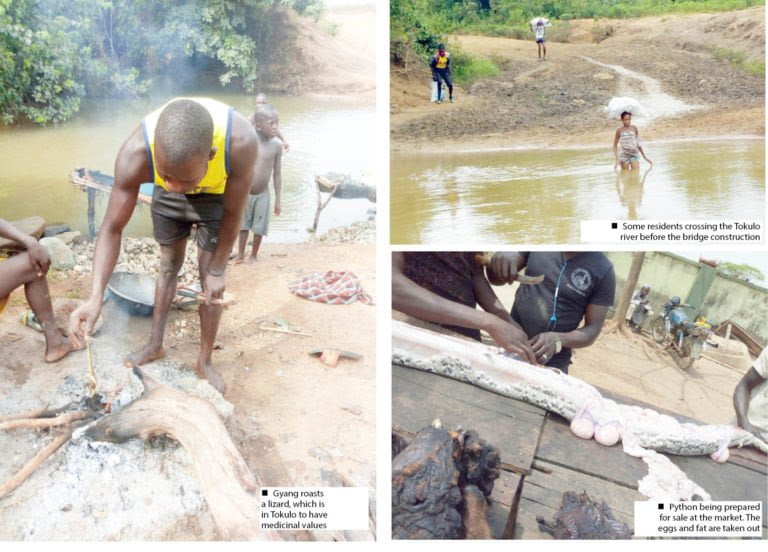 In Tokulo, a village of the FCT, residents search for gold dust in a river and feast on lizards, snakes and other species because they believe they are nutritious and medicinal. Our reporter went to the neglected community and dug into the consumption of wild animals that might drive some species into extinction.

Tokulo is an old settlement located in a remote part of Bwari Area Council of the Federal Capital Territory (FCT).

Most of the hundreds of people here are Gbagyi but almost all can converse slickly in Hausa. It shares boundaries with Dnako village to the west, Igwu to the south and Mpape in Kaduna State to the north.

While most of the residents are farmers, a few are said to have obtained white-collar jobs in various places. Another handful engages in trade and businesses.

One of the residents said they feel isolated because of lack of basic amenities and while farmers grow both food and cash crops in excess due to abundant fertile soil, poor roads have affected the transportation of these products.

The roads are bad due to erosion and wear and have contributed to the poor standard of living in the area.

The road from Igwu, for instance, does not provide all-weather access because a few kilometres down the road, there is a ford where commuters wade through a river.

This ford becomes impassable during the rainy season, between March and November, because of rising water level and the absence of a bridge. This means villagers have to take a longer route to connect to neighbouring communities.

The FCT Administration has facilitated the construction of a bridge across the river as a Community and Social Development Project. Though work was not completed it was the construction fill residents with hope of better times to come.

At least in terms of a bridge. In terms of water supply, that is a different story. A traditional ruler in one of the villages near Tokulo, said water shortages persist throughout the year thus, people rely on boreholes and wells for domestic water supply.

In Dnako village, serious water scarcity has resulted in strict rationing measures in which different households can only access the hand-pump borehole on given days. On such days, it is usual to see residents lining up patiently with their water fetching utensils.

The Esu (Chief) of Dnako, Yuda Garba, confirmed that the motorized borehole was out of order and residents rely on the manual pump.

This has forced residents, mostly women and children, to draft a timetable to fetch water at the only serviceable borehole, the chief said, and called on authorities to come to their aid.

For Esu Dnako, the poor road network in the community is a major impediment to the development of the area and the situation is worsened during the rainy season.

But despite the challenges of life here, some economic activities have attracted many residents. One of them is gold extraction from the river, where ‘miners’ can be seen fetching sand from the river, panning and sieving for the precious stones or at the very least, gold dust.

It looked like a tedious and frustrating search but each time they find flecks of gold in the sediment, the miners become excited.

One of them, Godfrey Parisa, said his three-man group only finds a small amounts of gold every day and make about N5, 000 when they sell it to local buyers.

The buyers measure both its weight and purity before paying for it. They, in turn, smelt and sell to individuals and firms who will process the metal into various shapes.

A 16-year-old secondary school student among the gold searchers said he used the monies realized from his labour on himself especially for school expenses.

He goes to school during the week and to the river on weekends for fossicking. During school holidays, he usually has more time to commit to hunting for gold.

“Extracting gold from the sand is tedious and risky because tidal surges can sweep away any object,” he said. “When the volume of water in the river increases, perhaps, after precipitation, you have difficulty in fetching sand.”

But the river and its shores do not only host the prospectors as it is home to a range of animals such as fish, birds, amphibians, reptiles and mammals. Some of these become food or medicine for the miners.

One brown lizard, a specie native to the area, is said to be a good source of protein. It is captured using different traps and special techniques before it is roasted over an open.

A teenager, who simply identified himself as Gyang, said roasted lizard is one of the delicacies “that can take your fancy. It contains some nutrients that are essential to the human body and has some health benefits because it cures skin diseases. ”

Gyang said he goes to the bush at his leisure time to hunt for the brown lizard because of its nutritional value. He roasts the meat in an open fire without condiment before eating.

Upon closer inquiry, Gyang declined to mention the advertised heath and spiritual properties of the lizard but another source, who declined to give his name said it prevents stroke and epilepsy while the Agama species in particular cures asthma and cough.

He said people eat lizards also to increase stamina among other untapped benefits adding that its skin has medicinal and spiritual values.

It is not only lizards that find themselves on the menu here. Pythons too, when caught, end up on the plate. Customers jostle for python meat, fat, skin and the contents of its stomach in ‘bushmeat markets’ for different uses, according to a source.

Wild animals meat vendor, Nura Sani, has been selling at Dawaki, Bwari, Abuja for 20 years said high profile people, book for a complete python or some of its parts.

Sani, who is passionate about snake meat, said he is totally unaware of any health disorder caused by eating reptiles.

Just like lizards, Sani said, pythons could be found in shrubs and rocky outcrops in many parts of the FCT, adding that hunters also look for them in neighbouring states.

“The meat is mouth-watering and low in fat and it is ‘sweeter’ than beef but the texture is not different from fish. People who are used to python meat in Abuja come to us to book in advance and once the snakes are captured in the bush or farms and brought to us, we phone them to come.

The meat and some of the body parts reportedly have medicinal benefits including cure for skin ailments, cardiovascular diseases and help with male sexual vigour.

“Python fat and skin have a lot of health benefits and many people patronize us for these things. The fat is very effective in easing joint pain. It gets rid of joint stiffness.

“The fat is applied to burns especially to restore the skin colour and many people have confirmed its effectiveness to us,” Sani said.

Preys suffocated and ingested by the snakes are thought to have spiritual benefits especially if they are extracted from the body before they are digested, he said.

“Animals swallowed by pythons are being looked for because they have a number of spiritual benefits. They are combined with other items to facilitate the achievement of magical powers or they could be used alone depending on what a person is looking for.

“People who claim to have magical powers buy the animals preyed upon and swallowed by snakes from us to practice sorcery,” he said.

He said most hunters are careful in handling wild animals especially those that are known to be clever or posses mysterious qualities that are difficult to comprehend.

In Sani’s summation, animals that demonstrate a certain level of intelligence are possessed because they can disappear from where they are kept or from sight.

“One of the hunters that usually supply ‘bush meat’ to us to buy, brought a live python which was bought by my friend at a reasonable price and after payment, the big snake was kept in a cage before it would be slaughtered or sold.

“We all left for our routine assignment in the same location and all of a sudden, the python mysteriously disappeared. I believed it has not gone far but was hiding around our marketplace in Dawaki. We shall find it soon,” he said.

Other reptiles hunted in the FCT for their meat are alligators and crocodiles but unlike pythons that are commonly hunted during both hot and dry seasons, they could be found all year round, according to Sani.

“Crocodiles are mostly hunted for their meat and to some extent, their skin and people come to us day in day out to buy the meat; they enjoy its taste.

“The meat tastes like fish and is low in fat and it is very nutritious. Crocodile meat is not poisonous and can be kept especially when it is smoked,” he said.

Meanwhile, a veterinary doctor, who would not want to be named, has confirmed some reptiles, particularly snakes are venomous and “evidence has shown that people can contract diseases by eating the meat.”

She said farmed and wild reptiles are disease carriers and are hosts to other disease-carrying agents including tapeworms. She advised that the venom should be extracted from all dead animals and the meat should be cooked at high temperature.

Similarly, conservationists have raised concern over the consumption of wild animals especially those believed to be the possible hosts of coronavirus including pangolins in Chinas where the outbreak of COVID -19 started.