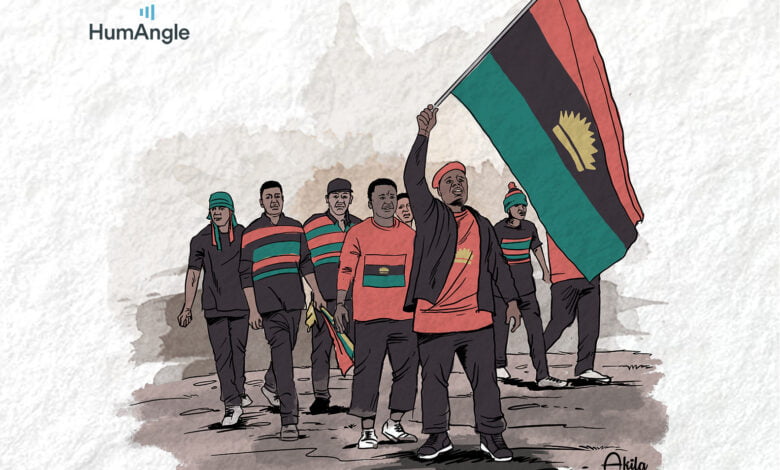 Terrorists suspected to be members of the proscribed Indigenous People of Biafra (IPOB) have continued to perpetrate all forms of attacks in Southeast Nigeria. The emergence of rival factions among the group’s members is contributing to the insurgency.

The armed wing of the separatist group, Eastern Security Network (ESN), has been at the forefront of armed conflict to secure the southeastern region’s independence from Nigeria and create an independent state of Biafra. This comes decades after the first declaration of the Biafra Republic led to a devastating civil war between 1967 and 1970 and eventually failed.

Most of the recent attacks by IPOB and ESN fighters have resulted in the murder of state security personnel and civilians. The attacks have targeted police stations, markets, and other public properties, including Independent National Electoral Commission (INEC) offices and custodial centres.

On Sunday, May 22, 11 people, including a pregnant woman, Harira Jubril, and her four kids, were killedin the Orumba and Onocha areas of Anambra. The incidents triggered public outrage and led to the government’s declaration of curfew in seven local government areas of the state.

Though declared a terror group in 2018, IPOB was founded in 2012 by Nnamdi Kanu, who had spoken at various gatherings threatening Nigerian authorities.

At various times, he referred to Nigeria as a zoo, urging his loyalists to take up arms against the state. “We need guns and we need bullets. It’s either Biafra or death,” he said in a 2017 interview.

While Kanu is currently standing trial for treasonable felony, unlawful possession of arms and illegal importation of broadcast equipment at a Federal High Court in Abuja, IPOB has continued to enforce an illegal sit-at-home curfew every Monday to protest his continued incarceration.

The weekly sit-at-home protests, with substantial compliance, mean schools are shut to avoid endangering pupils, and that socio-economic activity are often suspended. Moreover, the intensifying violence associated with the secessionist agitation has also been met with the excessive militarised response of the state security forces.

Though IPOB claims that its preferred strategy for achieving self-determination is through a referendum and periodically calls on its members for symbolic marches across cities, Kanu had repeatedly fed his followers with inflammatory messages through his broadcast on IPOB’s Radio Biafra.

The messages have led to attacks on pan-Igbo platforms such as Ohaneze, with IPOB members beating ex-Deputy Senate President of Nigeria, Ike Ekweremadu, at a cultural event in Germany.

The separatist group was later divided in 2020 following a disagreement between Kanu and his deputy, Uche Mefor, over how the group is run. Mefor resigned after he was said to have repeatedly warned Kanu to respect human rights in the agitation for Biafra.

After he resigned from Kanu’s IPOB, Mefor floated a new radio station called “Biafra Human Rights and Freedom Radio,” saying the radio aims to defend the rights of Igbos being violated by Kanu’s IPOB.

However, SB Morgen Intelligence, a geopolitical research agency, reported that Mefor’s resignation from IPOB had to do with money. The report said Kanu forced him out after a faction of the UK chapter, led by Mefor, asked for an account of funds raised.

“Following that request, Kanu abolished the position of Deputy Leader, but many members of the UK chapter remained loyal to Mefor, who many see as a better organiser than Kanu,” part of the report read.

Mefor joined ex-Niger Delta militant leader Asari Dokubo in March 2021, out of the blue to announce the creation of the Biafra defacto Customary Government (BCG), shortened as BCG.

Mefor, who identified himself as BCG’s spokesperson, said Dokubo is the leader, citing injustice on the Igbos by Kanu’s group as the reason for the new government.

Reacting to killings that marred the southeast in the last few months, Mefor wrote on Facebook that Kanu’s IPOB has turned into a killer group “competing with the rogue elements in the Nigerian security forces in outdoing each other in committing crimes against civilian populations in the southeast.”

Like previous cases of reckless killings by terrorists in the region, IPOB denied involvement in the recent killing of Harira and her children.

“We have always said it that the terrorists were imported into Biafra land to commit the ongoing atrocities all in an attempt to discredit our struggle, demonise IPOB and proscribe it, then lobby and bribe Britain to tag us a terror group with the hope to stop our match to freedom,” IPOB spokesperson Emma Powerful had claimed.

So who are the killers?

Like Kanu’s Radio Biafra and Mefor’s BHFR Radio, there is another online station known as the Enter Biafra Freedom Awareness Channels, a propaganda website and online broadcast station managed by Simon Ekpa.

Ekpa is a self-acclaimed disciple of Kanu, who rose to prominence in July 2021. The Finland-based agitator was announced as the lead broadcaster of Radio Biafra following the re-arrest of the IPOB leader by Nigeria’s government. He was, however, disengaged two weeks later for his refusal to sign Radio Biafra’s rules of engagement.

“The global family of the IPOB ably led by our great leader, Mazi Nnamdi Kanu, has observed with regrets that Mazi Simon Ekpa, whom our leader Mazi Nnamdi Kanu gave an appointment and duty to start broadcasting on Radio Biafra doesn’t want to follow the laid down rules of operation in Radio Biafra,” Emma Powerful announced.

Despite the announcement of his disengagement, Ekpa wouldn’t back down, and he has since been using social media to spread misinformation and instigate violence. HumAngle learnt that Ekpa also has his fighters known as “Autopilot”, and they have been accused of being responsible for the rise in terror activities in the region.

There is, however, another fighter group known as DOS, headed by ex-IPOB Directorate of State (DOS), Chika Edoziem. The group has also been accused by “Autopilot” of being behind killings in the troubled region. Edoziem was sacked by Rabbi Charles, who supposedly has Kanu’s backing.

When Anambra Governor Charles Soludo recently met Kanu, he said the IPOB leader was sad over the killing and kidnapping of civilians in the region, “including the brutal enforcement of the senseless ‘sit-at-home’ perpetuated by sundry groups claiming to be acting for or on behalf of IPOB”.

Kanu’s family has warned Ekpa to cease using the name or the image of Kanu in his broadcasts or fundraising activities.

HumAngle learnt from multiple sources within IPOB that by the structure set up by Kanu at the inception of ESN, the combat force was not designed to take instructions from IPOB coordinators. Kanu is said to be the supreme commander of ESN, and no other person is empowered to give orders to the militia.

However, multiple videos have surfaced showing ESN conducting combat drills and holding military-grade rifles. The violent activities of the terrorists are eclipsing communities and cities in the Southeast as residents are already seeing themselves trapped between a rock and a hard place.

The fierce struggle for power within IPOB’s hierarchy has inevitably opened Pandora’s box of insurgency in the region.