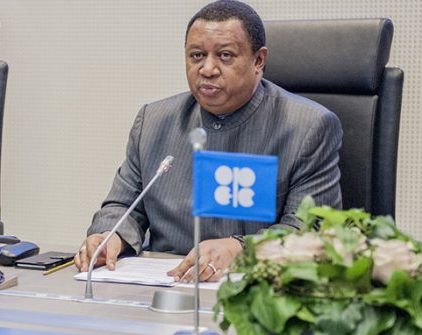 Secretary-General, Organisation of Petroleum Exporting Countries (OPEC), Dr. Mohammad Barkindo, says one of the organisation’s cardinal achievements was the launch of the inaugural OPEC Africa Dialogue in June  2021.

Barkindo made this known on Friday in a letter he addressed to Mr Anibor Kragha, the Executive Secretary, African Refiners and Distributors Association (ARDA).

He said the launch could not have been realised without the ARDA and the excellent leadership of its executive secretary.

“As I prepare for the end of my tenure as Secretary-General of OPEC on July 31, 2022, I am taking the time to say farewell to many of the key stakeholder I have had the privilege to work with over the last six years.

“Indeed, I am taking stock of the myriad accomplishments that, together, we have been able to achieve.

“And, perhaps even more importantly, the excellent relationships that have developed and the personal bonds that were forged during this exciting yet challenging period of time,” he said.

He said the ARDA, in partnership with the African Energy Commission (AFREC) and African Petroleum Producers’ Organiation (APPO), paved way for the establishment of a historical partnership that would have a lasting legacy for OPEC and its member countries.

He said it was the newest of OPEC’s portfolio of international energy dialogues, and came as the organisation had witnessed an expanding African membership.

“In fact, we have proudly welcomed three new Members from Sub-Saharan Africa during my short tenure alone.

“These newer members are building upon an already strong continental foundation, which includes Libya, that joined OPEC in 1962, Algeria in 1969, Nigeria in 1971 and Angola in 2006,” he said.

He further explained that all-together, since 2018, Africa was the continent with the highest number of member countries in OPEC.

According to him, throughout OPEC’s 62-year history, African member countries have played a key role in meetings and decisions in support of the organisation’s efforts on the global stage to promote stability in the global oil market.

This, he said, was in the interest of producers, consumers and global economy.

“We look forward to continued fruitful collaboration with ARDA, in addition to AFREC, APPO and other leading African partners.

“Together we seek to strengthen and empower Africa to reach its full potential as a leading global provider of sustainable energy to help meet the world’s growing energy requirements.

“I wish you all the very best of success as you continue to admirably and ably lead ARDA and make significant contributions to Africa and its energy industry,” he said. (NAN)