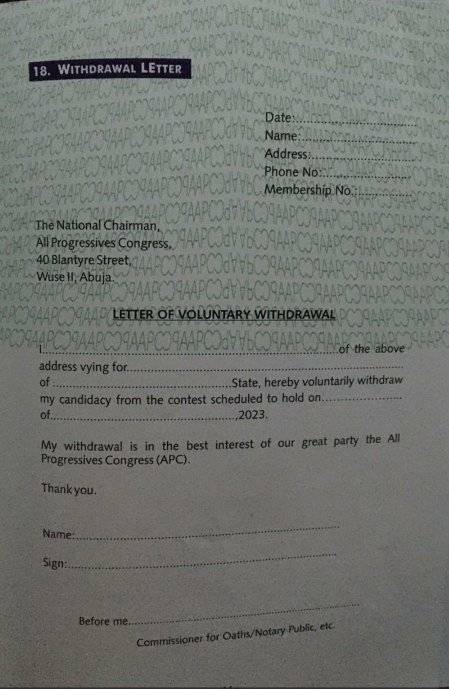 The All Progressives Congress is gradually proving to be as predictable as Nollywood movies, with everyone predicting the outcome from the start.

280092123 391428799532162 227386897431547027 n
I have since shouted about the conspiracy theory of Mai Buni alleged alliance with Goodluck Jonathan under the APC, should in case you missed it read here Egungun Don Enter Express: Mai Buni’s Secret Ambition Boomerangs May End Jonathan’s Presidency Under The APC

People chastised me for making these forecasts, claiming that I was induced with high-grade narcotics to come up with such a theory. Permit me to repeat my previous forecasts from March 8, 2022 word for word.

“Unfortunately, Bush Radio sources have it on good authority that Mai Buni had a different plan, he wanted to become the Vice President to a Southern Presidential candidate and from the look of things his preferred choice of the Southern candidate was Ex-president Goodluck Ebele Jonathan.

When we activated our GOAT EYES it was understood that there might indeed be a hatchet plan in drafting Goodluck Jonathan into the race by a certain cabal. Please do take note that Mai Buni was shopping for a Southern Christian presidential candidate.

GEJ would be drafted in through the back door knowing quite well that he was not a member of the ruling APC.

GEJ somehow has the trust of the Northern oligarchy and of course, he has only a single term to spend. So while Mai Buni sells GEJ well to the Northern Elites he was stylishly seeing himself as the greatest beneficiary.

All these plans were in top gear even when there are hush talks here and there that GEJ may not be constitutionally eligible to contest for the presidency taking into cognizance he spent a total of 6 years as President.

Now, this was the plan peradventure it sailed, there was never a plan to have a national convention instead it was meant to be a unity convention which translates to holding the NEC congress and Presidential convention on the same day.

That same day the whole “abracadabra” would take place and the rest as they say would be history.”

That strategy is still operational, but my concern now is why are presidential hopefuls like Asiwaju Bola Tinubu, Yemi Osinbajo, Chibuike Amaechi, and others remaining silent? On the eve of the form sale’s deadline, GEJ carefully picked the APC presidential form through a proxy.

The same night, GEJ met with Adamu, the APC national chairman, before departing for his customary international commitments.

The outcry against the clause in the ‘Letter of Voluntary Withdrawal’ should be heard loud and clear. Why is the APC’s case different from that of their PDP counterparts? Can this nonsense happen in the PDP without Wike or Atiku bringing the house down?

Why aren’t these presidential hopefuls kicking against this withdrawal clause after purchasing this form for N100 million and feverishly running around the country seeking delegates’ approval? Does this imply that these hopefuls and the shadowy Cabal are on the same page?

It’s amusing, but given the time constraints and politicking, how is it conceivable that GEJ, who only joined the party yesterday, could garner enough delegates’ support without presidential influence?

It’s awful if every political aspirant enters the primaries only to leave at the end of the day; we saw it during the last National Convention, and it’s rearing its ugly head once more as the presidential primaries approach.

I once asked why did the Presidency assure Tinubu of a fair play, promised Osinbajo the ticket and finally drafts in Jonathan to the race? If they do not have a plan?

That plan is now the source of my concern. If Osinbajo, Tinubu and the South do not pull out and continue their regional resolution strategy , I will not be shocked if the game is rigged in favor of the North via the PDP.

According to Babangida Aliyu, the former chairman of the PDP Northern Governors Forum during GEJ’s reign, the North readily abandoned GEJ to collapse their structure for the APC, and he was also a victim, losing his senatorial district.

This game that is being played should be avoided at all costs; it makes no sense for a single region to keep power for 16 years in a row. With a Jonathan candidacy , I’m curious to see how far the APC would go when the hate campaign begins.

Buhari’s videos finishing the GEJ’s administration would be the National Anthem , these people don’t know politics, they would manufacture all the ogogoro stories and bring in Patience back into the whole drama. You would soon start seeing doctored old videos of Patience insulting the Alamjiri’s circulating like it was this morning it happened.

The campaign would be strong and the same Buhari who is showing I don’t care attitude would be preparing for retirement then, even if the PDP wins in the General elections it would bother him less.

This message is not intended to stroke anyone’s ego, but rather to serve as a wake-up call to our southern presidential candidates to wake up and smell the coffee, or at the very least put up a fight worthy of praise.

My name is Osigwe Omo-Ikirodah, and I am the Chairman and Chief Executive Officer of Bush Radio Academy.