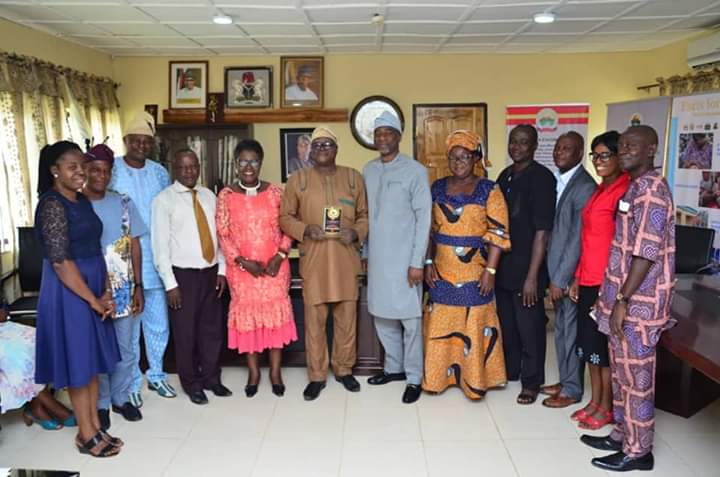 A former Director in the department of Information Services of the Ekiti State Ministry of Information, Tourism, and Values Orientation, Prince Sunday Aribatise has been described as a thorough bred professional, who gave his best while in the service of the State.

The Commissioner for Information, Tourism, and Values Orientation, Aare Muyiwa Olumilua while speaking at a ceremony organized by the ministry to mark the retirement of the former DIS, said it was important to move close to an individual before forming a notion about such person. In his words, “Before you pass your judgement on anybody, get to know that person first”. He added that within the short period of working closely with Prince Aribatise in his capacity as an Acting P.S, he realized that the former Director is a thorough bred professional, with a lot of creative ideas.

Aare Olumilua described Prince Aribatise’s retirement as bitter-sweet, saying it is bitter because he will have to leave, but sweet because he is leaving on a very good note. He appreciated his contributions towards the progress of the Ministry during his years of service, adding that his wealth of experience will still be needed in the nearest future.

Also speaking at the event, the Permanent Secretary of the ministry, Dr. Mrs. Adekunbi Obaisi, described the former Director as a diligent officer who gave his best while serving. She urged Prince Aribatise to remain focused and continue giving his best to serving humanity.
Another colleague, Mr Olatoye, described Prince Aribatise as a cool headed boss who hardly gets annoyed and was committed to running an open style of leadership.

Prince Aribatise, the retiring Director of Information Services, expressed his gratitude for the send forth event organised in his honour, and appreciated all, especially Ekiti State government, that gave him the opportunity to serve. In conclusion, he also spoke glowingly of the leadership of the Ministry whom he worked with, saying, they made the journey worthwhile for him.