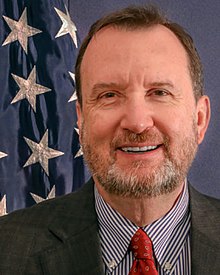 The appointment was announced in a statement issued by the White House on Monday. He is to replace Mary Beth Leonard, who is the current Ambassador to Nigeria.

Mills is a career member of the Senior Foreign Service with the rank of Minister-Counselor.

He currently serves as the US Deputy Permanent Representative to the United Nations (UN).

Before his appointment as Deputy Permanent Representative to the UN, he was Deputy Chief of Mission and then Chargé d’Affaires at the US Mission to Canada.

The White House statement also said Mills’ other assignments include Senior Democracy Advisor at US Embassy Baghdad, Political Counselor at US Embassy London, and Political Officer at the US Mission to the United Nations.

“Prior to joining the Foreign Service, Mills was an Associate Attorney with the firm of Duncan, Allen and Mitchell in Washington, DC. A native of Louisiana, Mills earned a BA in Foreign Service from Georgetown University, a JD from the University of Texas School of Law and an MS in National Security Policy from the National Defense University. He is the recipient of multiple State Department awards and speaks French and Russian,” the White House said.

Picture of medical secretary who lay dead in her London flat for two-and-a-half years is revealed
223,302 Jobs in UK updated by #nigeriansinuk @OgbeniDipo: