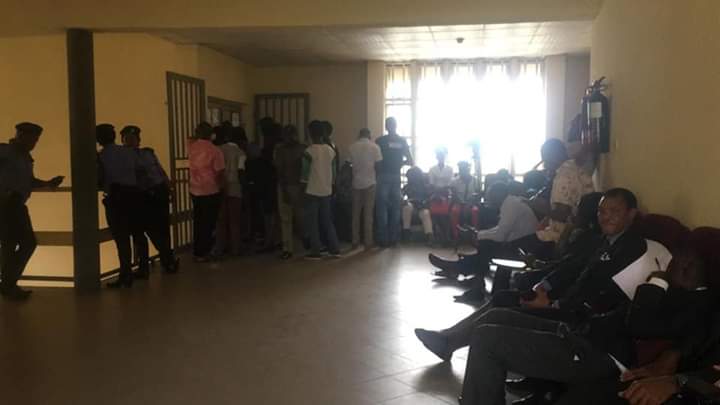 Court officials and policemen chased journalists filming and photographing the set up of a stage for the masquerade witnesses scheduled to testify against journalist and rights activist, Agba Jalingo away from the Courtroom 2 of the Federal High Court in Calabar moments ago as the secret trial begins, City News reports.

Three Lawyers in Mr. Jalingo’s defense team were also asked out of the Courtroom at the instance of the prosecution counsel, Mr. Dennis Tarhemba. Two police sergeants who act as security officials for the Court as well as one Court clerk effected the orders.

The correctional officers who accompanied Mr. Jalingo from the custodial center were also asked out of the Courtroom.

He is facing charges bordering on conspiracy, terrorism, treasonable felony and attempt to topple the Cross River State government.

The Court had earlier in the day dismissed an application by Mr. Jalingo’s counsel to modify his order of October 23, 2019 which granted leave for the prosecution to mask its witnesses.

In that ruling, the presiding Judge, Justice Simon Akpah Amobeda also ordered that the public and the press will not be allowed during the cross examination of the prosecution witnesses.

The case was stood down until noon. However, Justice Amobeda resumed sitting on the case at about 1:33PM with the prosecution counsel, Dennis Tarhemba, Mr. Jalingo, two court clerks, the Judge and his police orderly left inside the Courtroom.

Before the Court resumed sitting, Mr. Tarhemba had approached men of the Special Anti Robbery Squad as well as the Anti Cultism and Kidnapping Squad to chase friends, associates, family members, lawyers and even correctional officers who crowded outside the Courtroom.

But, following an argument, they were allowed to stay just outside the Courtroom.

Earlier, after the ruling of the Court, Mr. Jalingo’s counsel, Adeyinka Olumide-Fusika, a Senior Advocate of Nigeria had told the Court that his submission’s were “mis-characterized” and said the only inference he could draw from the demeanor of the prosecution counsel, was that there was a communication between the Court and the prosecution. He also said he was not confident that a secret trial will bring justice especially as there will be no independent recording of Court proceedings.

At least two dozen armed policemen from the State command of the Nigerian Police Force as well as a dozen personnel of the Nigerian Security and Civil Defense Corps had surrounded the Court as early as 8:00AM with those going in searched thoroughly. There are a handful of State Security Service agents also around.

Mr. Jalingo arrived Court around 9:48AM in a green colored van marked “Calabar Prisons” in the company of three correctional officers; one was armed.

He wore blue jeans, black shoes and a shirt with the inscription “We Must Stand Up To Bullies.” He proceeded to receive a green muffler with the inscriptions “I Love Nigeria” and “Great Nigeria” inscribed on either side of the muffler from Jonathan Ugbal, another journalist facing trial over the #RevolutionNow movement.

The Story So Far…

Mr. Jalingo had in July, published an article where he demanded the Cross River State government comes clean on the whereabouts of the NGN500 million approved and released for the floating of the Cross River Microfinance bank.

In August he was invited by the Cross River State Police command for an interview based on a petition against him bordering on his article.

The interview was first slated for August 19, 2019. It was later rescheduled for August 26th and September 3, 2019. Mr. Jalingo went public with his decision to honor the invitation.

However, he was arrested in a gestapo styled operation by Police officers in his Lagos residence on August 22, 2019. He was then driven by road to Calabar, the Cross River capital where he arrived on August 24, 2019.

He was detained for 32 more days at a police black site facility with limited access to him until his arraignment on September 25, 2019 for the hearing of his bail.

The trial has suffered so many setbacks with the Court denying admitting Mr. Jalingo to bail on two occasions; October 4th and October 30th.