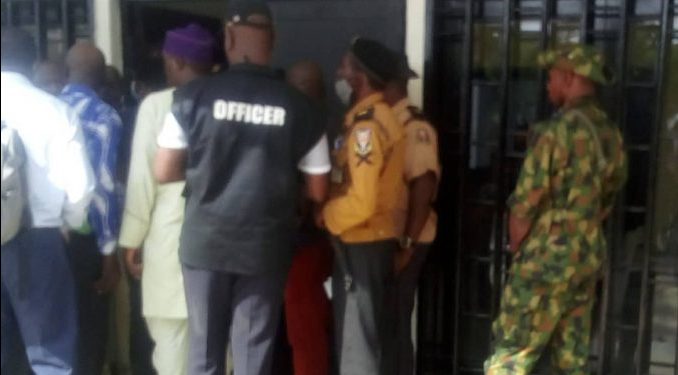 Soldiers have been deployed to the University of Ibadan as the process for the selection of a candidate to replace the incumbent Vice Chancellor, Prof. Idowu Olayinka, has raised the tension on campus.

This is coming on the heels of more withdrawals by candidates who are potential replacements for the incumbent, hinging it on allegations of unfairness. 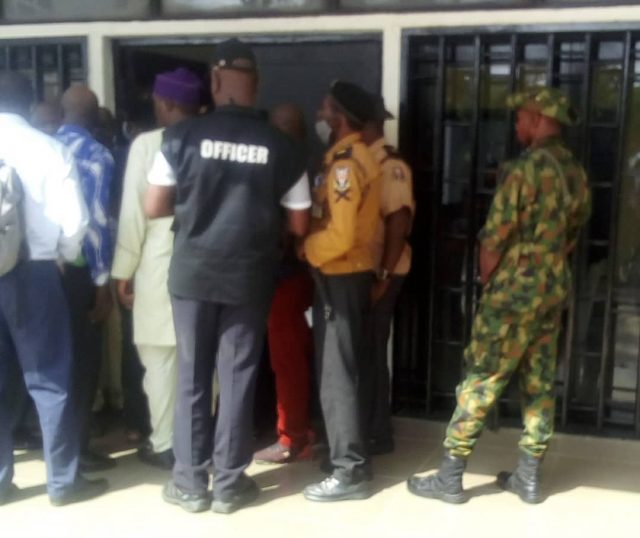 Sources told The Eagle Online that as at press time, members of the Senior Staff Association of Nigerian Universities and Non-Academic Staff of Universities have mobilised to the venue of the announcement of the candidate for the Senate/Selection Board for the incoming VC, Trenchard Hall.

According to available information, the venue had become rowdy, with Soldiers, of the Oyo State security outfit, Operation Burst, allegedly threatening to shoot anyone who foments trouble.

Prof. A. A. Fasanmade of the Department of Physiology, College of Medicine of the institution was one of the latest additions to those who withdrew from attending the selection process.

Fasanmade, in a letter to the Deputy Registrar of the institution, Morenike F. Afolabi, said: “I had replied to your SMS, asking me to supply the details of my tellers.

“The reply to your message to me is reproduced here:

“I am officially withdrawing my candidature from the election of tomorrow.

“I noticed that the fundamental issues are yet to be addressed and the rush to have an election within a few hours of taking the decision is to me tantamount to fraud.

Prof. O.G. Arinola told Afolabi: “Good morning, Mrs Afolabi. I appreciate the attention you accorded me today on the phone and for acknowledging the receipt of scanned letter and email message stating my withdrawal from contesting as a member of Selection Comm. for UI, VC.Election is scheduled for today.

Prof. Adémọ́lá Ọmọbẹ́wàjí Dasylva said: “Dear respected Senate member, I wish to inform you that I am not participating in the purported election scheduled for this morning.

“It is illegal and an infringement on my rights for anyone to have displayed my name on the ballot papers as a contestant.

“Yesterday night, I wrote a 9 point-objection and withdrawal of my candidacy letter emphasising the observable anomalies in respect of the election, to the Registrar and the DR (SAAI), and cc’d Chairman of Council and members.

“The Almighty God is in total control of the situation in UI.

“Thanks for your usual understanding and cooperation.”

“The less than 24 hour time period given for the rerun election is too small to allow me make any reasonable preparation.

“Therefore, I don’t want to participate in this election and will consequently not send any teller.

“Please act promptly not to include me among the contestants.

Dasylva had in an earlier letter written:

Dear Ma,
In response to your letter dated 24 November, 2020, received at 5: 03pm, requesting for the names of my tellers in furtherance of the decision of Senate for a new election, I want to categorically state that my name should not be included as a candidate for the election. Should the election be conducted with my name included, it is a violation of my fundamental right. Therefore, I am using this medium to express my objection as follows:

(1) On what authorization did Senate act to call for a fresh election of the Joint Council/Senate Representatives?

(2) That Senate meeting held to discuss a correspondence from the Hon Minister for Education to the Governing Council is both irregular and abnormal.

(3) The letter from the Hon. Minister for Education was read in part, and selectively at the Senate meeting, therefore, I was not privy to the whole content to be able to take informed decision on my participation or otherwise in the so-called election under reference.

(4) It is expected, therefore, that the Chairman of Council should first have met with the Council members to deliberate on the letter, and to take specific decisions that may authorize a Senate meeting as appropriate.

(5) The letter from the Hon Minister to the Chairman of Council was only copied to the VC, and as such, it was unprocedural for the Senate to discuss and take decisions on a letter that was not primarily addressed to it, and that the Council was yet to meet on.

(6) The said correspondence from the Hon. Minister emphasizes, among other things, a fresh election and not fresh voting. Therefore, what I expected was a repeat of the entire process, that is, a call for fresh nominations, campaign processes and then voting. In other words, the approved procedure of UI Senate on elections should be followed to the letter.

(7) In view of the above, may I therefore advise that for the sake of morality and to protect the integrity of the electoral process, the election should be allowed to follow due process, and the Chairman of Senate should not be seen to stampede members into a hurried fresh election.

(8) None of the earlier contestants, including me, should be allowed to stand for the fresh election. My reason for this advice arises from the fact that it was not only the e-voting that was in contention, but also and more importantly, the petitions had indicted and implicated some of the contestants, too.

(9) As a result of all these, and in line with my earlier response to the Secretary of Council dated, 22 November, 2020, I do not wish to participate in the said voting tomorrow. So for me, the question of sending the names of Senate members to serve as my Tellers does not arise at all.