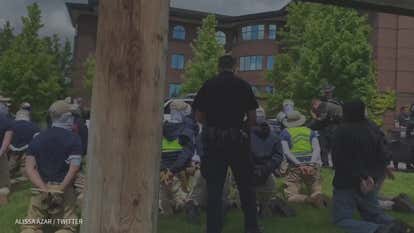 A former British police constable has been sentenced to 20 weeks in jail for sending a series of racist memes, including ones about the death of George Floyd, to a WhatsApp group.

James Watts, 31, shared the posts in May and June 2020 in a group chat, which included former colleagues at a prison he’d worked at.

At the time of the posts, Watts was working for the West Mercia Police, southwest of Birmingham, England.

He resigned after police launched an inquiry into the posts. He was charged with 10 counts of sending grossly offensive messages, including one featuring a white dog wearing Ku Klux Klan clothing, another showing a kneeling mat with Floyd’s face printed on it, and jokes about Floyd’s death using pictures of cartoon character George of the Jungle and the children’s game Guess Who, The Guardian reported.

Floyd, a Black man, was murdered in May 2020 by a Minneapolis police officer who knelt on his neck for more than nine minutes. His death sparked international uproar over police brutality.

In sentencing Watts at Birmingham Magistrates Court on Tuesday, Deputy Chief Magistrate Tan Ikram said he had “undermined the confidence the public has in the police,” according to The Guardian.

“At the time of these offences, you were a police officer ― a person to whom the public looks up to to uphold the law ― but you did the opposite,” he said, The Guardian reported.

“Your behavior brings the criminal justice system as a whole into disrepute. The hostility that you demonstrated on the basis of race makes this offending so serious that I cannot deal with it by a community penalty or a fine.”

The judge also said he had “no doubt” Watts would have received training in relation to diversity and inclusion during his tenure as a prison officer, the BBC reported.

Watts’ name has also been added to the College of Policing’s barred list, banning him from any policing role across the country for life, according to The Worcester News.

Numerous law enforcement officers across multiple U.S. states have also faced consequences ― though not as severe ― for posting racist messages and memes on their personal social media pages, amid intensified public scrutiny of police behavior in the wake of Floyd’s death. Some were fired or investigated over troubling online behavior.

Police officers in the U.S. have repeatedly been linked to the spread of extremist content on social media. In 2019, a Reveal News investigation found that hundreds of active-duty and retired law enforcement officers from across the U.S. were members of Confederate, anti-Islam, misogynistic or anti-government militia groups on Facebook.