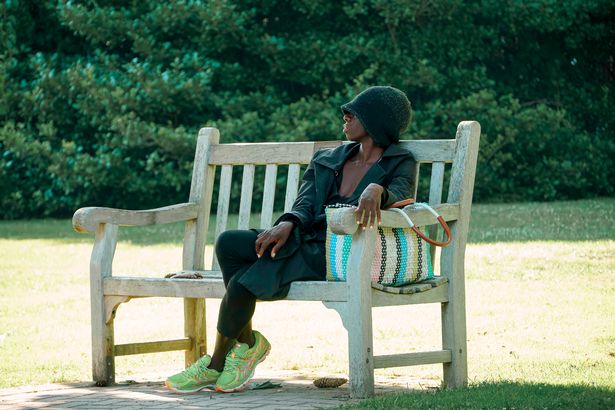 The police have arrested a Nigerian woman, Peace Ofoego, for breaking into multiple private mansions to sleep in Hamptons, New York.

The 32-year-old Nigerian woman has been labelled “Goldilocks of the Hamptons” over her tricks in Westhampton.

She has been arrested in Westhampton three times for finding comfort at homeowners’ backyards, pool houses and rooms.

Daily Mail said Ofoego had broken into not less than seven mansions in posh territory to sleep for the past few months, and thus been arrested three times for trespassing since the end of May.

According to the police, Ofoego, from Nigeria, said she was fleeing from an abusive husband in Florida, and has claimed she was trying hard to find a place to regain custody of her children.

It was reported that a resident of Westhampton, Peter Nesvold, took her photos as she tried gaining entrance into his home while his wife was inside.

Nesvold called police and Ofoego was arrested and was taken away shortly afterwards.

He also called police and asked them to record the incident, but refused to press charges against her.

Reports disclosed that Ofoego was first sighted in Westhampton Beach on Memorial Day weekend, when a resident reported to police that a “black female wearing a black trench coat and sandals” was wandering through the backyard construction site of his four-bedroom rental property – just about a mile from the village’s train station.

When police arrived on May 29, she told them he had no identification or credit cards because she had been robbed while living in Washington DC.

She also said she traveled to New York City a few days earlier, from where she boarded a rail road to Westhampton Beach, where she said she was looking for a hotel room near the ocean.

Police then helped her find a local homeless shelter where she said she wanted to charge her computer “and transfer funds to an account.”

But just a few days later, on June 2, she was seen wandering through the wealthy neighbourhood again – and it would not be the last time.

Daily Mail reported that the authorities said that Ofoego passed through an unlocked gate that leads from the beach to a $275,000-a-month eight-bedroom rental on exclusive Dune Road.

She then allegedly entered the house through an unlocked back deck, where she relaxed until police showed up – and charged her with criminal trespass.

“Subject stated she was staying at a house down the road and entered the stated residence to ask somebody about a restaurant to eat at,” a police report obtained by the Post says.

Then just two days later, on June 4, Ofoego was again spotted “staying” in the pool house of a property that rents at $35,000 a month.

When police showed up that time and were attempting to find another homeless shelter for Ofoego, “Peace began walking away,” an officer wrote in his report, adding that he cautioned her that if she kept wandering into village homes she would again be arrested for trespassing.

Ofoego’s last encounter with the Westhampton police came on June 24 at a “quintessential beachfront estate” that features seven bedrooms and was listed for rent at a whopping $280,000 in July and August.

According to the police report, she boldly walked into the second-story bedroom, which was shocking to the homeowner, which led to the call on police who came to the scene and arrested her.

But when they were processing her paperwork at the police department, Ofoego was said to have told the police officers they were mistaken and she just “went inside to look at the rental.”

“You just want to arrest me,” she allegedly accused them. “All I did was look for a rental.”

Ofoego has been spending her days walking through the village and along the beach, residents have reported on Facebook.

Some have said they saw her on back roads, on Main Street, at a summerhouse where bands play during the summer months and at a local marina.

Sometimes she was seen wearing the same black trench coat and black knit beanie she was reported in back in May – despite hot temperatures.

Janet Feldman, for example, commented on the Westhampton Beach Area Community Forum, said she saw Ofoego walking on the beach and down Dune Road while walking her dog in the morning.

“She seems mentally unwell for sure,” Feldman wrote.

Marie Costelli also commented: “A few weeks ago, she approached me in Lidl asking for help. She needed money to pay for her groceries.

“As I was handing her some cash, which she took, a man who may have been the store manager asked her to leave. I felt sorry for her, I hope she gets the help she needs,” Costelli said.

Ofoego has said she looks forward to defending herself in court, refusing a court-ordered public defender at hearings on July 6 and July 13.

At one of those hearings, Liam Anthony DeFronzo wrote, Ofoego was arguing with the judge.

And days earlier, the Post reports, when officers were trying to serve her with a subpoena to appear in court, she told them they were harassing her and threatened to sue them.

“It seemed to me she is angry with where she is in life and with the system,” DeFronzo posited. “Ultimately, it seems she’s looking for a place to sleep, but of course you never know what she might do, and it’s not acceptable to break into homes.

“Does she truly want help in finding some sort of shelter and is doing this as a cry for help? I don’t know, but I felt compelled to help her the other day in the courtroom,” he said.

She told the Post she was born in Nigeria, but has lived in the United States for the past 13 years – coming to the country when she was 19 years old and settling in Baton Rouge, Louisiana, where she began studying medical science at Southern University.

She also said her father is a journalist in Nigeria, and she was educated in boarding schools before coming to the United States.

The 3 women on the NNPC Limited Board.
National grid collapses for 18th time in 2022