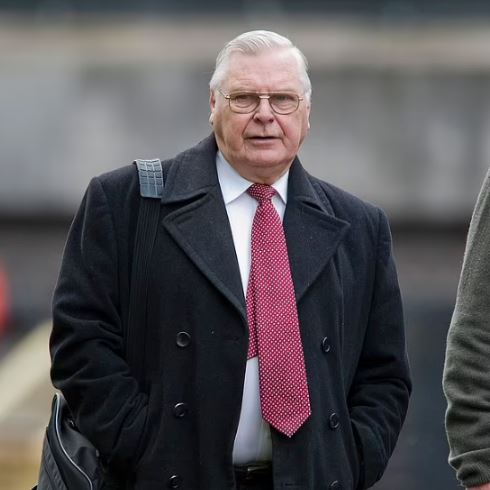 An 83-year-old church elder who defrauded a businesswoman of her life savings of £600,000 by convincing her that it was going into an offshore scheme that didn’t exist has been ordered to pay back just £1.

David Vaughan Jones, a founder of the Evangelical Church in Newtown, Powys, conned members of his congregation out of their money by recommending the bogus plan.

He reportedly posed as a respected tax consultant to lure fellow members of his congregation into the scam.

A court heard businesswoman Sharon Myler was the ‘largest single loser’, defrauded of £606,000.

Prosecutor James Davis explained how she only realised the scam when he was jailed for other financial frauds.

‘He persuaded clients to invest in offshore accounts which he said would provide a much better return than investing in this country,’ Mr. Davis said.

‘But police uncovered no evidence of him ever investing in offshore accounts. It could only be concluded the funds never existed.’

But investigators found no trace of the money – and he was ordered just to pay a nominal £1.

‘A financial investigation found no assets that could be realised to make any contribution towards that figure,’ said Mr Davis.

‘The defendant is on a private and state pension. His honour is therefore invited to simply make a nominal order of £1 today. Clearly, should any assets materialise in the future, this is a matter that can and should be revisited.’

In a victim impact statement, Ms Myler said: ‘David Jones stole my life savings, causing huge financial and personal hardship. He breached my trust, lied constantly and stole a lot of money from me. I had to borrow money from my family which was extremely embarrassing.’

But in reality, he had no financial qualifications and was in fact a disgraced former solicitor who was struck off from The Law Society in the early 1990s.

The court heard ‘prominent’ Jones used his influence in the church to persuade members to part with large amounts of cash over a 20-year period.

Judge Niclas Parry told Jones, of Llandrinio, Powys, that the money could not be found.

He said: ‘It should be put on record that there has been an investigation by officers whose profession it is to investigate these matters.

‘Remarkably, bearing in mind how much money was taken, they simply can’t find it. It’s right to state that the investigation will continue and if assets are found then this order would be revisited.

‘There are people still begging me to do something about it, who understandably believe that I’ve let them down.

‘I simply want them to know there are people investigating and have been investigating to see where the remaining money is. These people have suffered such huge losses.’

Ferdinand Marcos Jr., son of late dictator in stunning victory. A previously unthinkable return to power of the Marcos family, 36 years after its humiliating retreat into exile.
Why the new Anglo-Swedish pact matters