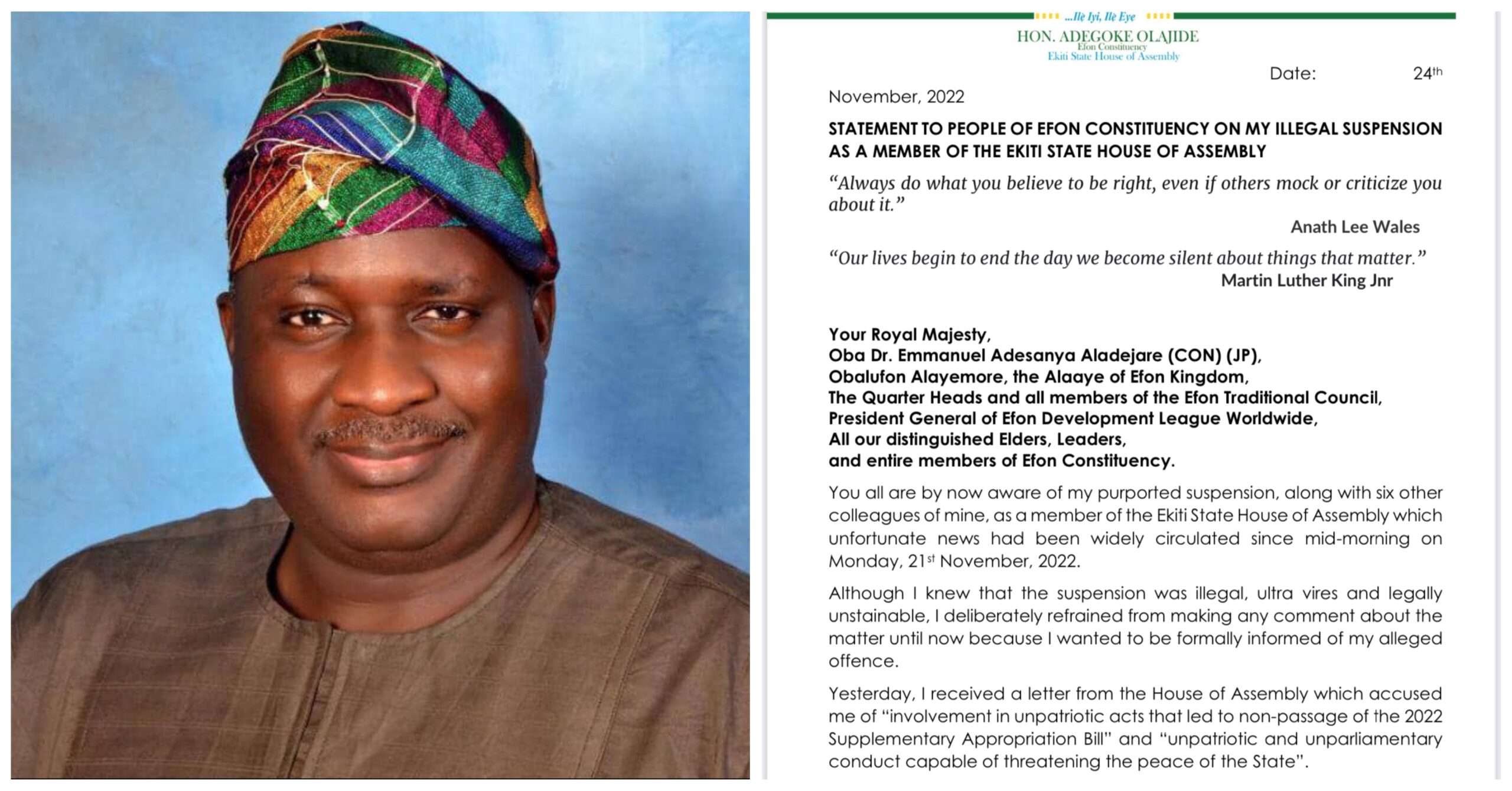 November, 2022
STATEMENT TO PEOPLE OF EFON CONSTITUENCY ON MY ILLEGAL SUSPENSION AS A MEMBER OF THE EKITI STATE HOUSE OF ASSEMBLY
“Always do what you believe to be right, even if others mock or criticize you
about it.”
Date: 24th
Your Royal Majesty,
Oba Dr. Emmanuel Adesanya Aladejare (CON) (JP),
Obalufon Alayemore, the Alaaye of Efon Kingdom,
The Quarter Heads and all members of the Efon Traditional Council, President General of Efon Development League Worldwide,
All our distinguished Elders, Leaders,
and entire members of Efon Constituency.
You all are by now aware of my purported suspension, along with six other colleagues of mine, as a member of the Ekiti State House of Assembly which unfortunate news had been widely circulated since mid-morning on Monday, 21st November, 2022.
Although I knew that the suspension was illegal, ultra vires and legally unstainable, I deliberately refrained from making any comment about the matter until now because I wanted to be formally informed of my alleged offence.
Yesterday, I received a letter from the House of Assembly which accused me of “involvement in unpatriotic acts that led to non-passage of the 2022 Supplementary Appropriation Bill” and “unpatriotic and unparliamentary conduct capable of threatening the peace of the State”.
I hereby wish to inform Efon people in particular and the entire Ekiti public in general, that the allegations are not only unfounded, they are, indeed absolutely ludicrous. When, how and where was I involved “in unpatriotic
Anath Lee Wales
“Our lives begin to end the day we become silent about things that matter.”
Martin Luther King Jnr

acts that led to non-passage of the 2022 Supplementary Appropriation Bill” and “unpatriotic and unparliamentary conduct capable of threatening the peace of the State”?
The House had a successful plenary sitting on Tuesday 15th November, 2022 where a new speaker was elected. The plenary sitting was followed by an equally successful and peaceful parliamentary meeting attended by all members of the House after which everybody departed for their homes. The Assembly Complex was sealed by fierce looking, armed policemen in the early hours of Wednesday, 16th November who prevented all Honourable members and workers from gaining access to the Assembly from that day until Monday when I was accused, judged and condemned; so when, how and where did I commit the alleged offences?
It is particularly despicable that the allegations were levelled, discussed and judgement passed at an unlawfully convoked meeting of fourteen members of the House which started at the unparliamentary hour of 6am. Those members of the House had been camped overnight in a location outside Ado Ekiti and shepherded to the Assembly Complex on Monday morning by a combined team of armed policemen and a formidable gang of brutal political thugs. I make bold to say that I was neither pre- informed of that meeting nor apprised of the allegations against me. I therefore was not able to present any defence or response to the allegations. It is a big shame that colleagues, with whom I have been extremely cordial in the last three and a half years that we have worked together, will agree to shave my head in my absence. They concluded the matter without considering it necessary to give me any hearing even if such hearing would be unfair. I am told that it was all about politics and interests. Shame indeed!
Let me say that my suspension, along with six other members of the House, is a punishment contrived by persons outside the House of Assembly and outside the Government of Ekiti State because of our decision to exercise our democratic right of choice in support of the election of Rt. Hon. Olugboyega Aribisogan as the new Speaker of the House. Rt. Hon. Aribisogan was elected in a legal and transparent election which was conducted in the full glare of journalists and members of the public. The unlawful meeting on the floor of the House on Monday was a coup d’etat which was orchestrated to remove him from the exalted office. I want to

say quite frankly that I supported, and still support, Rt. Hon. Aribisogan for the Speakership position, for several reasons. Not only he is the only ranking member of the House of Assembly as at today, it was also clearly obvious that he was the better candidate for the office. It must also be noted that the Ekiti North Senatorial District which he hails from, was without any of the key Government offices in the State before he was elected as Speaker. For me, supporting Rt. Hon. Aribisogan for the Speakership was the right thing to do and I do not have any regrets for doing so.
As I stated earlier, all resolutions of the unlawful meeting are ultra vires and therefore legally unsustainable. Even if the meeting was lawfully convened, the House of Assembly does not have the power to suspend me because I was not elected in the Chamber. I was elected by the people of Efon constituency and only the people of Efon constituency have the right and power to remove me from the House through a recall process. This is an issue that has been settled by the Court of Appeal in its 2017 judgement in the case titled Speaker of Bauchi State House of Assembly vs Hon. Rifkatu Samson Danna.
Despite the height of illegality that was perpetrated in this State on Monday, I am still convinced that Ekiti State is neither a jungle nor a conquered fiefdom. I therefore urge the people of Efon constituency to remain unperturbed while I take legal steps to ensure my quick return to the floor of the House. I most respectfully want to express my deep appreciation to our revered traditional rulers as well as the eminent Ekiti Statesmen and Leaders of thought who are taking steps to ensure the amicable resolution of this avoidable crisis. I also thank all the people of Efon Alaaye, my family members, friends, and well-wishers across board, who have shown their concern about my wellbeing since this unfortunate development happened. I assure you all that falsehood and illegality will never prevail over truth and the rule of law in Ekiti State.
Thank you.
Hon. Adegoke Olajide