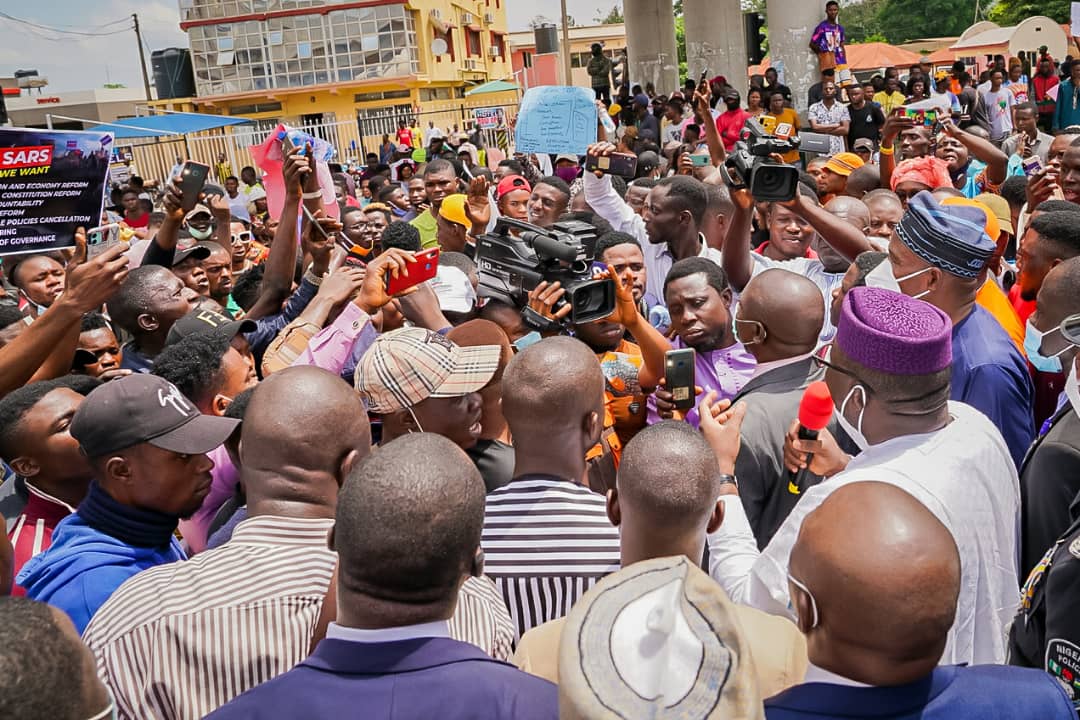 …promises to set up panel to investigate human rights abuses by SARS operatives.

Ekiti State Governor, Dr Kayode Fayemi this morning addressed endSARS protesters, in Ado- Ekiti, where he disclosed plans to set up a panel to investigate human rights abuses by the disbanded police squad.

The Governor who was billed to present the State of the State address at the House of Assembly, by 11.00am, delayed the event by an hour to join the protesters at the Fajuyi area of the state capital, where he addressed them for about 30 minutes and answered their questions after listening to their grievances.

The Governor told the protesters mainly youths that government has acceeded to their five- point demands, urging them not to allow their peaceful protest turn riotous.

Governor Fayemi also urged the youths who have experienced rights abuse by SARS operatives, to bring such cases to the panel of enquiry when it commences sitting.

Dr Fayemi assured the protesting youths of his support and that of his colleagues in the Nigeria Governors’ Forum for their demands, which he described as legitimate.

“As an activist, I appreciate and support your agitation. It is your legitimate right to demand for the protection of these rights.

“Govermment has acceded to your five-point demand. I also know that you have other demands outside the disbandment of SARS squad, which include right to qualitative education, end to ASUU strike among others.

” All these are important and as citizens you should be protected against unnecessary harassment. You should not be harrased because you ride a good car or use a good phone or wear a torn jeans trouser.

” You have made your point. It is your right to ventilate your grievances. Nobody can deny you this right. But please protest in a peaceful manner.” the Governor said.

The elated youths hailed the Governor as he departed the venue for the House of Assembly Complex.