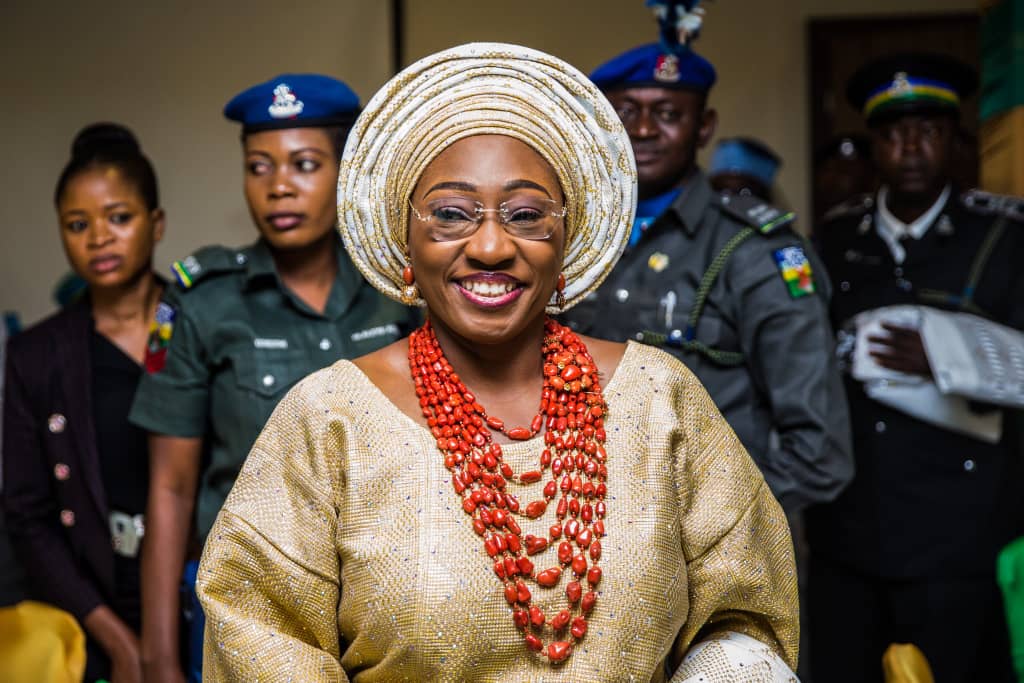 Much has been said, written, read and heard of this multiple award winner, Erelu Bisi Adeleye-Fayemi’s intimidating profile of being born in Liverpool, England on June 11, 1963. That she possessed BA, MA in History from the University of Ife, Nigeria (now Obafemi Awolowo University) and MA in Gender and Society (1992) from Middlesex University, UK is no longer news.

Today, I will be looking at Erelu who doubles as Iyalode as a writer, feminist, politician and a mother.

When you want to talk about Erelu as an author, then you want to talk of a prolific and renowned author who, within a space of five years, turned out three voluminous books apart from other contributions to national and international journals. You will also agree with me that to be a prolific writer, you must be an avid reader and that is who Erelu Bisi Fayemi is. No wonder in 2013 alone, Erelu chunked out two voluminous books, namely; “SPEAKING FOR MYSELF” with 490 pages and “SPEAKING ABOVE A WHISPER” which has 280 pages. These two books were reproduced in 2014 despite her very tight schedule as the workaholic wife of the governor, in an election year for that matter.

If anyone wants to say; “Yes, she could write books while in government because she had a lot of facilities to do so, what of another giant stride with the LOUD WHISPERS published in 2017? This 412-page book, you will agree with me, is a masterpiece! Just as she is using his pen to agitate feminism, so she is also raising his voice to advocate the cause of the oppressed and fight against child abuse. No wonder, she was recently bestowed a great honour of Zik Award 2018 for her leadership trait over the years.

Delving into where she actually cut her teeth for activism, I will tell you that Erelu did not suddenly wake to become an activist like many self-ascribed activists today who created the proliferation of several non-governmental organizations in Nigeria. Erelu has experience, as a Feminist Thinker, Writer, Social Entrepreneur, Policy Advocate, Trainer, Social Change Philanthropy Practitioner, Communications Specialist and Social Sector expert.

There is no way one can divorce Erelu’s writings from her feminist activism as noted in a review done on her book by the former Head of Department of English and Literary Studies, Ekiti State University, Dr Lara Owoeye. In her review of the LOUD WHISPERS, Owoeye wrote inter alia that “in the opening pages and first part, the author’s stance on issues of feminist import takes centre stage as she bears her mind on a range of perspectives on the theoretical and practical aspects of popular feminist postulations…”

As a thorough bred woman activist, Erelu served as a Principal Partner, Amandla Consulting which specializes in leadership development for women and she ran an online community news called Abovewhispers.com, where she wrote an immensely popular weekly column called Loud Whispers which she has now turned into a book. She was a UN Women Nigeria Senior Advisor, and was later appointed as a Visiting Senior Research Fellow at King’s College, University of London before returning to support her husband who was re-elected as the governor of Ekiti in 2018 and now Chairman of Nigeria’s Governor’s Forum.

“Bisi Adeleye-Fayemi is an avowed feminist ideologue who does not shy away from the feminist movement but states without prevarication that “I am a feminist, no ‘Ifs’ no ‘Buts”. In LOUD WHISPERS, she makes use of stories and essays to bring to the fore a number of issues plaguing the womenfolk, Nigeria as a nation and Africa in general. LOUD WHISPERS is, indubitably, a statement of her stance on the perception and treatment of women by a society that takes little cognizance of their existence. It will instantly clear the mist from the eyes of any doubting Thomas on the aspirations and expectations of the advocates of the feminine movement,” Lara Owoeye wrote.

Her contributions to motherhood won’t be complete if I fail to mention that she served as the Director of Akina Mama wa Afrika (AMwA), an international development organisation for African women based in London, UK, from 1991-2001 as well as Executive Director of the African Women’s Development Fund, (AWDF) – the first Africa-wide grant-making fund, which supports the work of organizations promoting women’s rights in Africa, from 2001-2010. Interestingly, during the first tenure of her husband as a governor in Ekiti, Erelu replicated AWDF by creating Ekiti Women Development Fund (EWDF) where the interests of Ekiti women were being protected.
It is on record that Bisi Fayemi sponsored a bill to the State House of Assembly to fight against gender inequality and child abuse in Ekiti. With this, those engaging in child trafficking and women abuse had to sit tight during the first tenure of her husband.

Though this law was not properly utilized during the regime of the immediate past administration in Ekiti, on the return of Governor Kayode Fayemi, Erelu had read a riot act to women abusers at a special reading organized her book, LOUD WHISPERS recently by the Ekiti Chapter of the Association of Nigerian Authors by asking them to “Park well”

Erelu as a politician. She is one woman who had swum in many troubled waters at the risk of blackmail and orchestrated propaganda, yet she successfully handled all situations to bring calmness which many a man will find difficult to achieve during the last electioneering campaign. To draw home this point, I will like to briefly narrate my personal experience with her, this time, not as a journalist but as a politician.

Considering the too many knotty problems Erelu solved during the build up to the last governorship primary election of APC in Ekiti State which I cannot start to mention here, I will rather describe her as a stabilizer in Ekiti politics. Erelu on her own calmed down a lot of frayed nerves to rally support for her husband. I can’t forget an occasion at the party secretariat before the rally when she went to meet some disgruntled stakeholder women who were so belligerent but Erelu did not give a damn. She met them and was able to break their ranks to get a sizeable number of them on the side of her husband. An interesting aspect of this woman of virtue as a politician is that she does not see politics as a do or die affair. Even after the election when her husband had been sworn in, she told her followers times without number that “please, I don’t want to hear ‘some people are for JKF some people are for that’. We are now in government and everyone is for JKF”. This is the spirit! No wonder it is said that; behind every successful man, there is a woman.

Above all, looking at Erelu as a mother of repute, she gives her own son and other people’s children new lease of life and the best education a parent can think of. Erelu has always been supportive to us all especially during social engagements and in our respective domestic affairs when brought to her knowledge.

On this note, I present to you a quintessential woman of virtue, an author, politician, activist and a mother, Erelu Olabisi Adeleye-Fayemi, our Mother General in Ekiti!