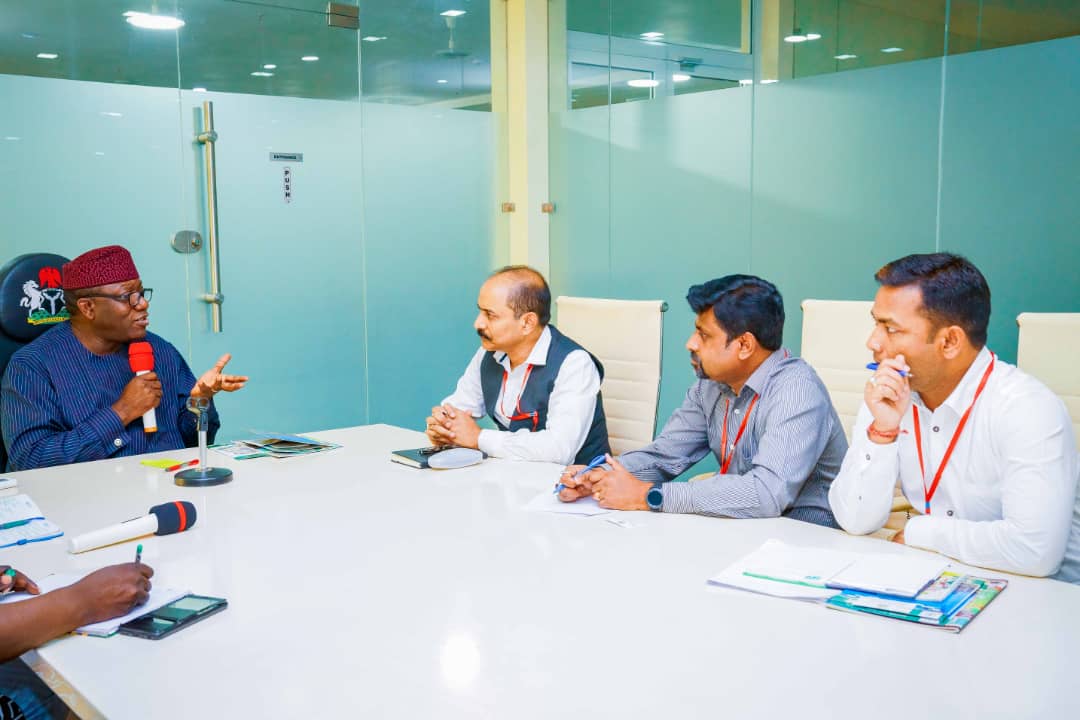 Ekiti State Governor, Dr Kayode Fayemi on Tuesday reiterated his commitment to providing the needed mechanism that would fast track the commencement of rice mills operations in the State, with a promise to restore the glory of Ekiti as a rice producing state.

The Governor stated this while receiving feedback from the Managing Director of Popular Rice Mill (a subsidiary of Stallion Group), Mr Amit Rai on the assessment of the land allotted to the company for a rice mill factory in the State.

The Stallion Group of industry is one of the industries the state government has entered partnership with in setting up rice mills in the State. Others are Dangote Farms and Jumlar Rice Limited.

Dr Fayemi explained to the team that the terms of security of tenure, incentives for investors, investment promotion framework, and the sanctity of contract of the state government were part of the things that would facilitate the decision of the company in setting up the mill.

Disclosing his move to attract other rice mill investors into the State, Fayemi said Ekiti used to be a rice producing market for the entire western region in the country.

He said: “I don’t want us to be accused of not making full disclosure. I am sure that you would have been reading in the media that we are also attracting other mills to the State. It doesn’t really threaten your own efforts. For us we know that you have unique skills that you are bringing to the table.

“We must also encourage our local players that they have a place in the sector. Your initiative is not at risk in any way, we believe that all of these initiatives we are bringing together are for our people.

”Even In the olden days Ekiti uses to be a rice producing market for the entire Western region and then we lost that. We are trying to regain it and accelerate it in the shortest possible time and that is where you come to assist us and I am confident that we will work well with you and we will achieve this together.”

The Governor expressed optimism that the mill would provide employment for Ekiti people, lift them out of misery, poverty and give them a sense of self-worth, with the hope that it would be commissioned before the end of the year.

“With more jobs at hand for our people, it will reduce misery and poverty in ekiti in a much more sustainable manner. We want investment that will empower our people and make them have a sense of self-worth. I hope that before this year runs out we will come to the point of commissioning. He said.

Fayemi while expressing delight on the assessment of land allotted for the industry to set up the mill, boasted of the capability of Ekiti farmers to produce enough paddy that would sustain the mills year round.

His word: “I am glad we have gotten to a point where you can do assessment and have come closer to your own decision whether to go ahead with this or not. Every evident before me clearly shows that you will have to (set up the rice mill) because you get virtually everything you need in Ekiti both in terms of commitment to this and in terms of organizing our farmers to produce enough paddy for you to be able to run the mill all year round.

“I think they would be assisted in terms of input, extension services, you could even be able to expand the home grown scheme in such a manner that we can have enough. I think the latest statistics I saw is that we have been able to produce almost 350,000 in Ekiti now but we have the capacity to even double that and by the time we work with you and your team, I have the belief that we would even be asking you for more than twelve tones per hour mill.”

Mr Amit Rai who earlier expressed delight about the land allotted to them , explained that the company already has a fully established integrated agricultural operations in rice mills which had encouraged paddy cultivation and promotion across the Country.

Rai assured that when the mill fully commence operations in the State, the company would train farmers in paddling cultivation and also provide high yielding seedlings that would lead to production of high quality paddy.

In his remarks the Special Adviser to Governor Fayemi on investment , Trade, and Innovation, Mr Akintunde Oyebode explained that the company had done business scale that reflected that rice production in Ekiti would be profitable.

Oyebode said, “The initial estimate was to set up 12 tons per hour mill in Ekiti state, from initial discussion we had with them in Abuja, they have done a business scale that shows that rice production here will be profitable, what they are left with is to come and do site assessment to select a favourable location for the mill. We have done that and I believe we have found what we consider a location that meets high technical assessment and they will come back with a more technical team to do survey and ensure that they can start the process of siting a new mill”