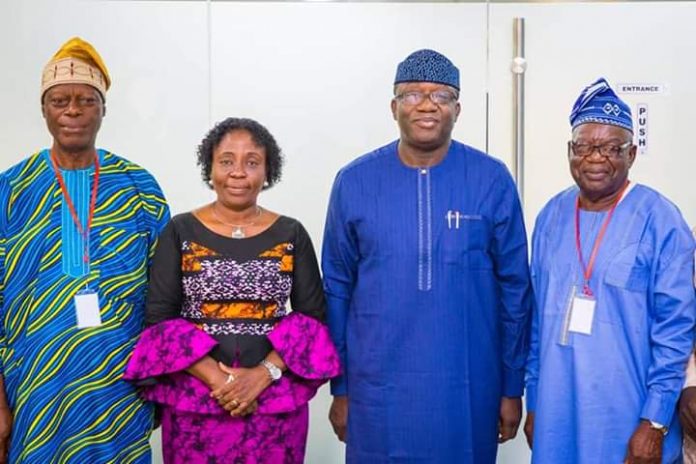 Ekiti State Ag. Head of Service (HOS), Mrs. ‘Peju Babafemi has said
the current Kayode Fayemi-led administration in the State would
implement best practices that would guarantee the welfare of elders
across the State, particularly pensioners.
Mrs. Babafemi, who made this known in her office while receiving
executive members of the state chapter of the National Union of
Pensioners (NUP), Ekiti noted that the state governor recognizes the
values of elders and their important roles in the society.

While referring to how the pensioners were deeply appreciated and
given first class treatment during the first administration of Dr.
Fayemi, the Acting HOS assured that the trend would continue in the
current administration.
Calling on the retired workers to cooperatively join hands with the
administration towards restoring the values Ekiti people are noted
for, said those at the helm of affairs will be ready to tap the wisdom
of the senior citizens.
Speaking earlier, the NUP Chairman of Nigeria in Ekiti State, Mr. Ayo
Kumapayi who felicitated with the acting Head of service on her new
status, commended the state government for paying the monthly pensions
regularly and for approving 100 million naira monthly for gratuity.
The NUP Chairman commended governor Fayemi for honouring all his
electioneering promises.
While pleading for the resuscitation of the 6% and 15% of pension
implemented during his first tenure but which cancelled by the
immediate past administration in the state, Kumapayi observed the
neglect of pensioners whenever workers’ salaries are reviewed.
The NUP Chairman used the opportunity to appeal to the state
government to provide the pensioners with office space and
subsidization of health insurance scheme for the pensioners to enable
them access good health care.