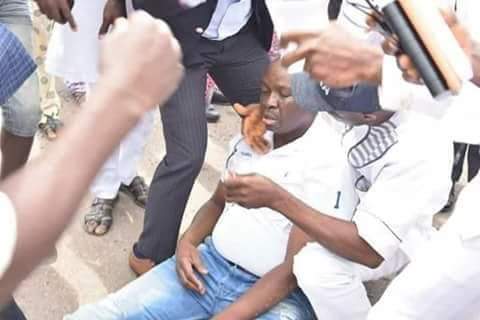 It is a pleasure apprising the collective mind with the usual play on minds as could be availed by the former Governor of Ekiti state and in person of Ayodele Fayose. Fayose despite being abreast of the protocols binding invitations would go ahead to flout rules on being invited by the Ekiti state house of assembly and as per a case bordering on corruption.
Cunny Fayose in his usual manner successfully deployed as many journalists as possible to the office of Ekiti State House of Assembly Speaker , he did this with the aim of craving the indulgence of the entire Ekiti people unknowingly to him that he has lost the kind of trust they used to have in him.

I doubt what we can see in a leader who is hell bent about neglecting his roles as the keeper of men, would he at the same time sabotage what could have made him accountable to his people, he had done the least by resorting to play to the gallery.

He need to be sensitized on reasons why he was invited, formally(through a letter and be duly informed as per the time and venue for his interrogation and not on social media which he mentioned as a source of where he was invited.

I deem it fit to call that place the conscience of the whole Ekiti, it is too hallowed than to be soiled by the filthy legs of a corrupt governor who is desperate about playing to the gallery.

On the other hand, we need set issues straight by trying to establish a difference between the personality of the former Governor and that of Lere Olayinka who will also be invited separately by the house, it is the discretion of the house to determine the modalities that need to be employed in engaging both personalities on their dual corruption cases and not theirs. It is also the peak of ignorance for Lere Olayinka to come as an aid to Governor Fayose, that would make a contempt of the legislature or an element of leadership in dearth.

The truth remains unalterable as it is now glaring that Fayose would not escape the consequence of his alleged corruption if found culpable and no percentage of his gimmicks would hold water in delivering him.
Conclusively, I advice him to look forward to that actual time when he would be rightly invited for an interrogation by the Ekiti State house of assembly, he need to concentrate on the pressing issues rather than the Rigmaroles. He can be assured of getting justice because the house already promised to hold on to the rule of law without being susceptible to any force anywhere.
I finally seize this medium to credit the intelligence of the Speaker, Ekiti State house of assembly, RT. HON Funminiyi Afuye as he adroitly addressed the irrational visit of former Governor Fayose to the house.