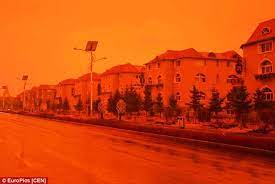 Video from the Chinese port city of Zhoushan neighbouring Shanghai shows the sky turned blood-red under thick layers of fog.

Panic could be heard in the voices of the residents as they recorded the discoloured horizon, stirring apocalyptic fears.

The crimson sky was most prominent by the port, prompting worries that a fire had got out of control.

On Douyin, China’s version of TikTok, users called the red sky a bad omen over China’s handling of the Covid-19 pandemic, resurgent in neighbouring Shanghai.

One user said it means: ‘Accidents will happen’, with another adding. ‘I started to stock up on supplies.’

But local media explained the strange weather phenomena was not a sign of Armageddon but in fact a result of light refraction.

‘When weather conditions are good, more water in the atmosphere forms aerosols which refract and scatter the light of fishing boats and create the red sky seen by the public,’ said the staff of the Zhoushan Meteorological Bureau, according to the Global Times.

The lighting may have come from a fishing boat that was harvesting Pacific saury, according to local media quoting China Aquatic Products Zhoushan Marine Fisheries Co, which owns the boat.

Online sleuths said particulate matter from the 2022 Tonga Volcanic Eruption, found to be the largest volcanic explosion in the 21st century so far, could also have contributed to the light refraction.

‘People do actually live in Westminster, but the interests of businesses & visitors seemingly override that of residents.’ By Mary Dejevsky
Ferdinand Marcos Jr., son of late dictator in stunning victory. A previously unthinkable return to power of the Marcos family, 36 years after its humiliating retreat into exile.