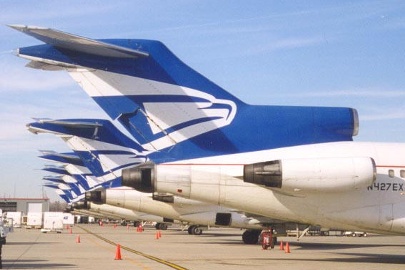 OTTAWA, March 25 (Reuters) – As Boeing Co and global airlines work to restore public confidence in the 737 MAX after two deadly crashes, they will have a play book they can use.

This is not the first time that Boeing has faced a crisis after launching a new plane with innovative technology. In 1965, three Boeing 727-100 passenger jets crashed in less than three months in the United States while coming into land, killing a total of 131 people.

Like the 737 MAX, the three-engined 727 was billed as one of the most advanced aircraft of its time. Boeing introduced the 727 in 1964 and portrayed it as a more efficient alternative to the standard four-engine jets of the day, with new features designed to make the 727 easier to operate from short airfields.

The 727’s wing flap system, which provides extra lift at low speeds, was unusually large and sophisticated, which allowed the plane to descend more quickly than other rivals and avoid buildings and other obstacles close to runways.

Investigators looking into the crashes discovered that some pilots did not fully understand the flap system and were therefore allowing the planes to descend at too great a speed.

“There was nothing wrong with the airplane… (but) if you didn’t really pay a lot of attention to it you could build up an immense sink rate,” said Bill Waldock, a professor of safety science at the U.S-based Embry-Riddle Aeronautical University. He uses the 727 accidents as part of a case study.

Aviation authorities ordered more training for pilots but allowed the planes to keep flying despite calls from some politicians to ground them.

Boeing made some modifications to the flight manual and to the procedures for flying the airplane on final approach.

In the case of the 737 MAX 8, Boeing is working on software and training updates.

Alan Hoffman, a U.S. aviation historian and retired transportation lawyer who has researched the 727 accidents, said given the publicity over the recent crashes, the U.S. Federal Aviation Administration would only allow the 737 MAX 8 planes to fly again if the regulator is convinced the fixes worked.

“The airplane will go back into service and unless something else crops up there will be no further problems and a year from now this will all be a dim distant memory,” he predicted by phone from St Louis, Missouri.

In contrast to the swift grounding of the 737 MAX 8 after the recent second accident, just two days after the third fatal 727 crash, in November 1965, the Civil Aeronautics Board said there was no reason to ground the plane.

“It passed very rigid certification tests … before it was put into service and nothing has turned up in our investigation to cause us to doubt its stability,” the board said.

Those words did not immediately reassure many travelers. Indeed, passengers had started to boycott the airliner after the crashes began.

“For a period of six months or so a lot of 727s were flying with half full cabins,” Waldock said by phone from Prescott, Arizona. Still, the 727 crisis passed.

The plane eventually became one of Boeing’s best sellers and was in widespread use for another 30 years. By 2003, virtually all had been retired as airlines moved away from the 727’s loud and thirsty engines. (Reporting by David Ljunggren; editing by Joe White and Cynthia Osterman)