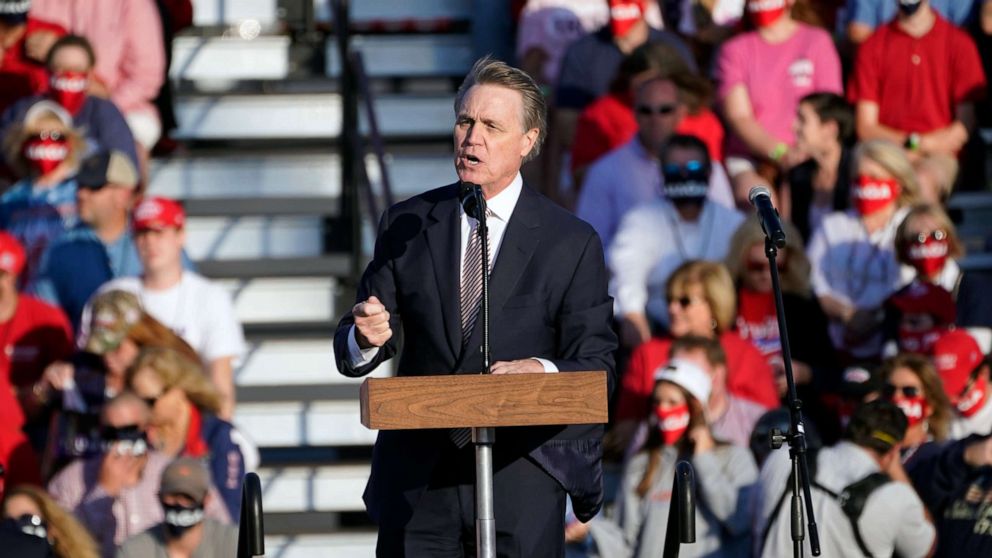 Georgia Sen. David Perdue is drawing outrage after appearing to mock Democratic vice presidential nominee Kamala Harris’ name while warming up the crowd ahead of a rally for President Donald Trump speech on Friday night.

Perdue, who has been a Senate colleague with Harris for over three years, was railing about Senate Democrats at the president’s Macon, Georgia, rally before flubbing Harris’ name and then going on to mock her.

“The most insidious thing that Chuck Schumer and Joe Biden are trying to perpetuate, and Bernie [Sanders] and Elizabeth [Warren] and Kamala — Kah-ma-la, or Kah-mah-la, or Kamala-mala-mala, I don’t know, whatever.”

Democrat Jon Ossoff, who is running against Perdue, wrote “we are so much better than this” in sharing a clip of Perdue’s mispronouncing Harris’ name.

In an interview with MSNBC later in the evening, Ossoff said, “This kind of vile, race-baiting trash talk is what President Trump has unleashed from sitting Republican members of the Senate.”

“Senator Perdue simply mispronounced Senator Harris’ name, and he didn’t mean anything by it,” Burke said in a statement. “He was making an argument against the radical socialist agenda that she and her endorsed candidate Jon Ossoff are pushing, which includes the Green New Deal, Medicare-for-all, raising taxes, and holding up COVID relief for the people of Georgia.”

Harris’ press secretary, Sabrina Singh, responded directly on Twitter, writing, “Well that is incredibly racist. Vote him out and vote for @ossoff.”

Democrats in the state and nationally are demanding an immediate apology.

“Senator David Perdue has served in the Senate alongside Vice Presidential nominee and Senator Kamala Harris since 2017,” the Democratic Senatorial Campaign Committee said in a statement. “He knows her name and he knows how to say it. His disgusting performance today is nothing more than a desperate dog whistle from a losing politician who was already caught running anti-Semitic ads against Jon Ossoff. Perdue has shown he lacks the dignity and respect that Georgians deserve from their U.S. senator, and he must immediately apologize.”Sen. David Perdue, R-Ga., speaks during a campaign rally for President Donald Trump at Middle Georgia Regional Airport, Friday, Oct. 16, 2020, in Macon, Ga.John Bazemore/AP

“Senator Perdue’s intentionally disrespectful mispronunciation of Senator Harris’s name is a bigoted and racist tactic straight from President Trump’s handbook,” Democratic Party of Georgia Chairman Nikema Williams said in a statement. “He owes Georgians an apology for his offensive display.”

This is not the first time that Perdue has been criticized for racial or ethnic insensitivity. As referenced by the DSCC’s statement Friday, state Democrats slammed the Georgia Republican in late July after his campaign posted a Facebook fundraising ad where Ossoff’s nose was slightly enlarged, an image the Jewish Senate hopeful called a “classic anti-Semitic trope.”

Perdue is currently favored to win the race, according to FiveThirtyEight’s election forecast.