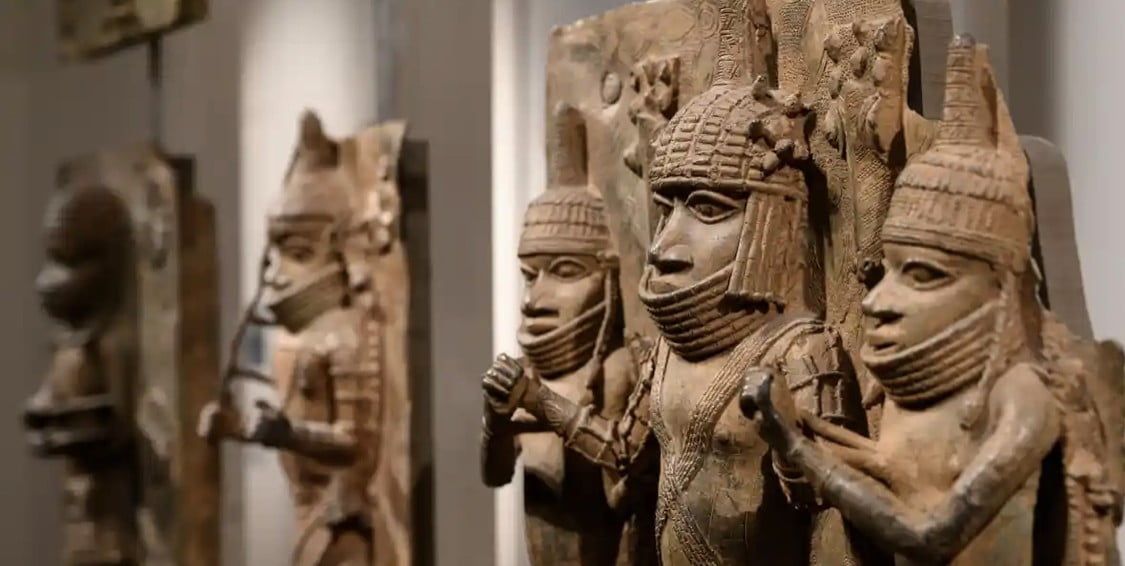 Berlin is negotiating to fully restitute hundreds of the Benin bronzes in a shift of policy that has been welcomed in Nigeria but will put pressure on museums in London and Oxford to also return artefacts looted by British troops from its former west African empire in 1897.

More than 500 historical objects, including 440 bronzes from the Kingdom of Benin, in what is now southern Nigeria, are held at the Ethnological Museum in the German capital. Half of the collection was due to go on display this autumn at the Humboldt Forum, a newly opened museum of non-European art in the city centre.

However, Hartmut Dorgerloh, the director of the Humboldt Forum, told German media on Monday that the complex could instead exhibit only replicas of the bronzes or leave symbolic empty spaces, and that the sculptures and reliefs could be returned to Nigeria as soon as the autumn.

The exhibition, due to open at the end of the year, would “critically engage” with the history of the west African kingdom and its capture by British troops, a spokesperson for the Prussian Heritage Foundation told the Guardian.

“Especially in view of the current debate we consider it essential to address this issue. As a matter of principle this does not exclude the restitution of the exhibited works.”

Under the terms of the agreement as reported by The Art Newspaper, Germany would take part in archaeological excavations in the region, provide training for Nigerian museum employees, participate in the construction of a new museum in Benin, and restitute the looted Benin bronzes held in Berlin to the Restoration Legacy Trust, an NGO set up in 2019.

The bronzes were looted by British soldiers and sailors on a punitive expedition to Benin City in 1897 and subsequently scattered across museums in Europe and North America. The single largest collection of Benin bronzes is held by the British Museum, with a further 300 objects held at the Pitt Rivers Museum in Oxford.

The museums have formed a Benin Dialogue Group to support the new museum, plans for which have been drawn up by the Tanzanian-born British architect David Adjaye, but until recently they had agreed only to provide looted works on a rotating loan basis.

“This would be a hugely significant shift”, said Victor Ehikhamenor, a Nigerian artist and trustee of the Legacy Restoration Trust, which would receive the restituted artefacts. “If Germany follows through with these plans, then any European country that holds on to Benin bronzes no longer has a moral ground to stand on.

“The time has come for the British Museum to finally join in this debate. The current situation is a bit like a thief has stolen your watch and sold it to a pawn shop, but the pawn shop is refusing to hand it over to the police. It makes no sense!”

Bénédicte Savoy, a French art historian who resigned from the Humboldt Forum’s advisory board in 2017, had criticised plans to exhibit the Benin bronzes in Germany in a recent interview, telling Der Spiegel that “with every month, with every day it becomes less likely that you can show the bronzes without embarrassing yourself”.