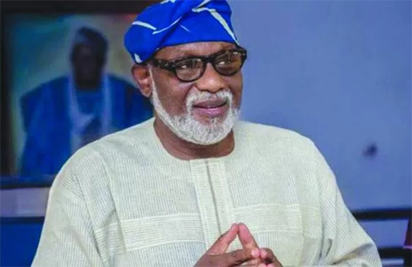 Gov. Oluwarotimi Akeredolu of Ondo State has warned that persons illegally in possession of arms and ammunition must turn in such devices within seven days from Friday, Oct. 30.

In a press statement on Friday in Akure, Mr Donald Ojogo, the State Commissioner for Information and Orientation, said Akeredolu directed that the arms and ammunition should be returned to the Commandant, South West Security Network, Amotekun, at the Pa Fasoranti’s Gardens, Alagbaka, Akure.

According to him, Akeredolu also directed those with such arms and ammunition to take advantage of the “window of grace” to turn in the deadly weapons as security agencies shall take necessary steps against defaulters after the seven-day ultimatum.

“Those who find it difficult to physically present such arms and ammunition for obvious reasons are advised and indeed, encouraged to call 08079999989 for further advice and instructions on appropriate steps to be taken,” he said.

“The general observation across the state shows a very low level of policing which is risky to society. Of note, policing is key and can only thrive on a note of mutual trust and respect.

“We can on the people to strive for a better society and brace up to take maximum advantage of lessons learnt from the unfortunate incidents of the last two weeks.

“Saddening as the events appear, there is no doubt that a fresh orientation, perception of self appraisal as well as an encouraging mood of sober reflection pervades the nation,” he said.

Akeredolu, therefore, advised the police ‘to take up their responsibilities as an institution and take charge of the public space for the good of all’.