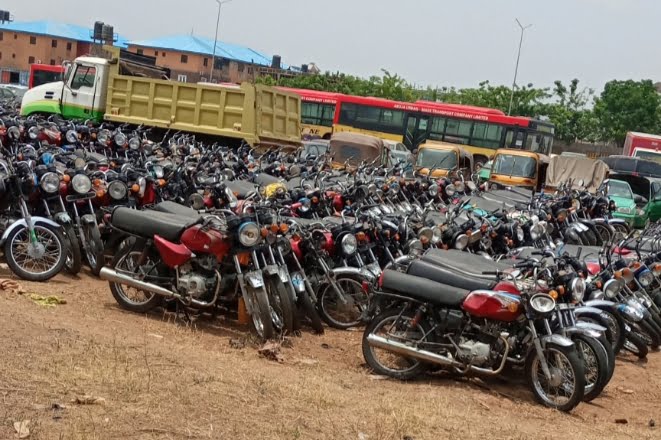 Some youths whose commercial motorcycles were impounded and thereafter destroyed by officials of the Directorate of Road Traffic Service, DRTS, are now holding the Federal Capital Territory, FCT, to ransom.

PRNigeria learnt that some of them have embraced crimes to make ends meet.

This is because the seizure of their motorcycles by the DRTS personnel also known as Vehicle Inspection Officers, VIOs, has prevented them from carrying out ‘legitimate’ okada business.

Personnel of the Abuja VIO between January and July 2021 impounded 1,500 motorcycles, which were then ‘burnt’ last December.

PRNigeria’s checks revealed that another batch of 1,200 impounded ‘okadas’ will soon be destroyed.

The investigation also disclosed that the commercial motorcycles were not just impounded arbitrarily.

They were seized as a result of the flouting of road traffic regulations in the FCT, which prevent ‘okada men’ from conducting their business on Abuja highways, but with the FCT suburbs.

According to an investigation conducted by PRNigeria, banditry activities, kidnapping, burglary, one-chance attacks, and armed robbery, among other crimes in Abuja, are what idle victims of the clampdown on okada, perpetrate after joining criminal gangs.

Weighing in on the issue, Chidi Omeje, an Abuja-based security expert, kicked against the VIO’s policy of crushing seized motorcycles.

He said: “The situation is very bad. It shows the cruelty of government and its agencies towards the masses. There is no need to destroy the legal means of livelihood of some Nigerians.

“By crushing people’s machines, you are breeding prospective criminals, people who have nothing to lose anymore. They are going to unleash their venom and transfer their aggressions on the society”.

Speaking in the same vein, a security analyst and crisis communicator, Senator Iroegbu highlighted the social and security implication of the law regulating commercial motorcycle trade in the FCT.

He said: “There is great economic loss as those affected did not just lose only their bikes, but the money they also used in buying them, as well as their means of livelihood.

“There should be a solution that leaves everyone satisfied. That is, the riders should retain their means of livelihood, without posing security and environmental threats to the nation’s capital.

In reaction to this report,  Dele Yaro, the Deputy Controller, Operations at the VIO National Headquarters in Abuja, told PRNigeria that the government is even showing ‘benevolence’ to the okada riders in the FCT.

“Some countries and even many states in Nigeria have since banned commercial motorcycle business, totally. But here in the FCT, we did not. But only regulated their operations,” he said.