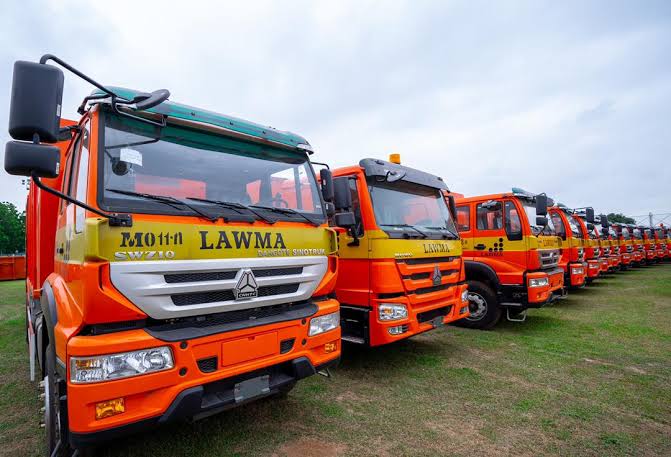 When Ibrahim Odumboni was appointed acting managing director (MD) of the Lagos Waste Management Authority (LAWMA) in May 2020, the Governor of Lagos State, Babajide Sanwo-Olu, was confident he was the perfect fit for the job.

In a statement, Mr Sanwo-Olu said the former banker would bring his wealth of experience as a former LAWMA executive director in charge of business development to revitalise the often-troubled agency.

Mr Odumboni replaced Muyiwa Gbadegesin, who was removed for infractions including allegations of misappropriation of funds.

However, the tenure of the 40-year-old Mr Odumboni has also now become controversial, with some officials querying his management of the agency’s assets.

In one instance, Mr Odumboni was queried by the state’s commissioner for environment for selling at least 55 mostly serviceable heavy-duty vehicles and a D9 bulldozer as scraps without following due process, and at a cost the commissioner described as ‘alarmingly undervalued.’

For two weeks, this newspaper tried to get Mr Odumboni’s response to these allegations, but all efforts were rebuffed. When reached for comments, Mr Odumboni directed this reporter to the agency’s spokesperson to schedule an appointment for an interview.

Akeem Akinleye, the agency’s spokesperson, initially said he was out of town and promised to arrange the interview when he returned.

But when he was subsequently contacted, Mr Akinleye said the MD was unavailable. Instead, he invited this reporter to the commissioning of the agency’s new trucks by the state governor.

This reporter then sent questions to Mr Odumboni directly via WhatsApp. He neither acknowledged the questions nor replied to them.

This newspaper also sent the questions in a letter to Mr Odumboni’s office. He did not reply. After a brief meeting at Ikeja Mall, Mr Odumboni promised to invite this reporter to his office and vowed to show him documents that proved he acted in good faith. He never did.

Between March 4 and 6, 2021, Mr Odumboni directed the disposal of 22 trucks, one engine and a D-9 bulldozer, located at LAWMA’s depot in Agege and Ikeja, documents seen by PREMIUM TIMES revealed.

LAWMA officials knowledgeable about the transfer of the vehicles to Blackcann Limited told PREMIUM TIMES the vehicles were moved from the depots at night in what they said appeared a move to evade questions about their destination from inquisitive officials.

The vehicles comprised four Man Diesel compactors, 10 Mercedes Benz compactors, four Mack compactors, one Hof compactor and two Daf compactors, from the Agege Transfer Loading Station (TLS). The engine scrap was also stationed at the Agege TLS. Others were a bulk mover and M29 compactor from the Ikeja depot. The D-9 bulldozer was moved from the Solous depot in the Alimosho area of the state.

In a memo authorising Blackcann Limited to take possession of the vehicles, Mr Odumboni claimed they were being removed from the depot for “assembling”.

“I hereby authorised Messrs Blackcann Limited to move all scrap metal and beyond Economic Economic Repair (BER) trucks at the depot to Lagos Waste Management Authority facility at Ikorodu for assembling,” Mr Odumboni stated in the memo dated March 4, 2021.

However, PREMIUM TIMES obtained release vouchers signed at the Agege depot before the vehicles were released, which tell a different story. The vouchers indicate that the vehicles were taken by LAWMA’s Engineering Department to either “Ikorodu Road,” or “Owode Onirin”, a popular scrap metal market along Ikorodu Road.

Also, contrary to the claim in the memo that the vehicles were taken from the depots for assembling, the release vouchers stated that they were taken for “safekeeping”.

A LAWMA official who asked not to be named for fear of being victimised pointed out further inconsistencies in the MD’s memo.

“LAWMA does not have any facility in Ikorodu,” the official said. There are only two sites remotely associated with LAWMA in the town, one is a dumpsite at Ewu-Elepe, the other place is a moribund Public-Private Partnership (PPP) project between Earthcare, a compost fertiliser manufacturer and LAWMA at Odoguyan along Shagamu Road.”

“It was a blatant lie to even say the vehicles were being taken for assembling. What does he mean by that? Are the vehicles going to be put together to manufacture new ones? In fact, our engineering department is stationed at our head office in Ijora, and repairs of vehicles are either done at our depots or at Ijora,” the source added.

When reached for comment about the disposal of the vehicles, Peter Benjamin-Black, the CEO of Blackcann Limited, declined to comment. During a telephone interview, he told this reporter to direct the questions to LAWMA.

What does the law say?

Mr Odumboni may have flouted the state’s procurement law in the manner he disposed the vehicles.

Advertisements
Section 80 (2) of the Lagos State Public Procurement Law states that “the open competitive bidding shall be the primary source of receiving offers for the purchase of any public property offered for sale”The law defines Open Competitive Bidding as ”the solicitation of bids from domestic contractors and suppliers registered or incorporated to carry on business under Nigerian Law.”Subsection (3) of Section 80 further empowers a Parastatal Tender Board shall issue regulations, detailing operational principles and organizational modalities to be adopted by the procuring entities engaged in the disposal of public property with the approval of the governor.Section 86 stipulates the punishment for an officer of the state found to have contravened any provision of the law. It said such an official “commits an offence and is liable upon conviction to summary dismissal from the government service and between five and 10 years imprisonment without the option of fine.”The second controversial saleThe sale of the vehicles did not go down well with some LAWMA officials. But while the murmurs about the first deal was yet to abate, Mr Odumboni initiated the sale of another 34 vehicles, which he claimed were unserviceable.This time, however, he sought official approval to dispose of the vehicles. But even the disposal of this set of vehicles was tainted with the allegation that the vehicles were grossly undervalued.

PREMIUM TIMES reliably learnt that several of the vehicles were procured about three years ago, during the era of Visionscape, a controversial waste management company backed by the administration of the immediate past governor of the state, Akinwunmi Ambode.

The vehicles were sold around the last week of April 2021.

Vexed by the irregularities he suspected characterised the sale of the vehicles and acting on complaints from some LAWMA officials, Tunji Bello, the commissioner in charge of the Ministry for Environment, the supervising ministry of LAWMA, on May 5, 2021, officially demanded explanation from Mr Odumboni about the deals.

The query was titled: “Re: Alleged Boarding of Vehicles and Equipment belonging to LAWMA without Due Diligence,” and had the serial number: MOEWR/HC/C/2019/VOL.1/67.

“I write to inform you that there are allegations that you directed managers of the Authority’s facilities to release several (about 30) heavy-duty vehicles (compactors, tipper heads etc) and a D-9 V-track Caterpillar bulldozer for disposer without consultation with or notification of the management and the vehicles were moved out in the dead of the night to the popular scrap metal market in Lagos (Owode Onirin).

“Furthermore, it has also been alleged that you officially initiated further boarding of an additional set of 32 vehicles, a considerable number of which were only recently purchased, and all of which were alarmingly undervalued.”

He directed Mr Odumboni to respond within five days of getting the query.

It also remains unclear if any disciplinary action was taken against the LAWMA boss for the suspected infractions.