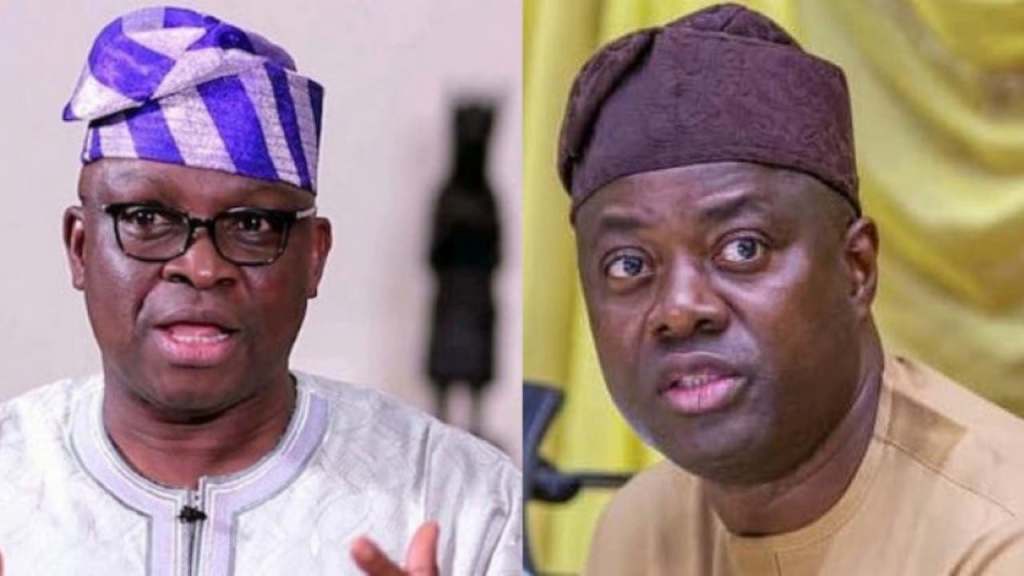 GOVERNOR Seyi Makinde of Oyo State has told the former Governor of Ekiti State, Ayodele Fayose, that he would continue to play his roles in the interest of the Peoples Democratic Party, PDP.

The governor’s response, followed the statement credited to former Governor Fayose, warning Makinde, to steer clear of party structures in all the states in the Southwest region of the country.

Makinde, in a statement made available to newsmen in Ibadan, on Thursday evening, by his Special Adviser on Strategy and Political Matters, Mr. Babatunde Oduyoye, stated that he would not be deterred by opposition to his reconciliatory efforts and plans to bring unity and cohesion to the PDP in the South-West.

He added that the governor has been doing his best both as the elected governor of Oyo State and as a leader of note within the PDP structure.

According to him: “As for the incumbent assignment given to Governor Makinde by the national leadership of the PDP, making him the chairman of the National Campaign Council for the party for the Ondo State governorship election, the governor has been doing his best to provide leadership, doing everything possible towards ensuring that the party comes out victorious in the October 10, 2020 governorship election.”

He maintained that Governor Makinde would remain focused on delivering good governance in Oyo State in fulfilment of the mandate entrusted to him by the good people of Oyo State, adding that the governor would also continue to play roles considered to be in the overall interests of the PDP in the South-West zone and nationally.

He counselled those who might want to paint Governor Makinde as meddling in the affairs of the party in their states to check themselves against the barometer of honesty, altruism and selflessness.

He said: “Upon his assumption of office in May 2019, Governor Makinde embarked on a mission to bring about unity and cohesion in the Peoples Democratic Party (PDP) across all the states of the South-West geopolitical zone.”

“To date, he has achieved a level of success in that effort and the party has not only become stronger, it is also better positioned for more successes in the zone.”

“The governor was in Lagos State to reconcile all sides and the whole world can see the outcome of that effort. He is playing the same role in Osun and Ekiti states, consulting everyone and seeking middle grounds for hitherto warring sides. I believe the opposition from some quarters in Ekiti State is a fallout of the peace effort being championed by the governor.

“One is gladdened by the fact that the consultative approach of Governor Makinde is paying off.”

“We are equally gladdened that the hitherto subdued voices in each of the states of the South-West now have a chance not only to hear others but also to be heard.”

He further said: “The governor will not back down from any effort that will bring about genuine reconciliation and strengthen the PDP in Ekiti State or any other state of the South-West for that matter, because he is of a strong conviction that it is by repositioning the party that all stakeholders can enjoy a win-win situation.”

“He will continue to remain ever committed to rebuilding Oyo State as can be seen in the various efforts to fix the infrastructure deficit, revitalise the health sector and put in place solid policies for the turnaround of the education system.”

“But as it is presently the case, the governor was found worthy of leading the PDP National Campaign Council for the Ondo election, having handled different responsibilities for the party in Kogi and Edo states. He is working hard and providing leadership for the council towards ensuring the victory of the party.”

“All loyal party members including those who lost out at the recently concluded primaries should cooperate with the campaign council to ensure the party wins the election instead of allowing rancour and disunity in the ranks.”

“We will strongly advise that stakeholders in the PDP whether in Ondo or Ekiti states should not allow themselves to be used by the opposition to distract Governor Makinde and derail the PDP.”

“We wish to advise that all stakeholders and lovers of the PDP should come to terms with the reconciliatory approach of Governor Makinde, which is aimed at bringing unity and more successes to the party that has suffered needlessly in the last few years.”