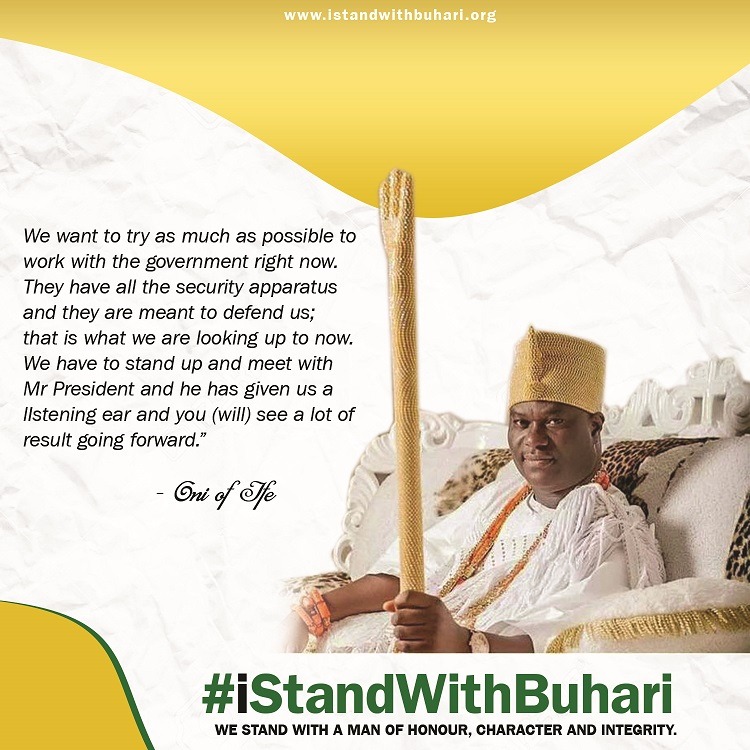 The Ooni of Ife, Oba Adeyeye Ogunwusi, paid a second visit to the Presidential Villa, Abuja, on Friday, in less than 24 hours after he met with President Muhammadu Buhari at the seat of power.

On the second visit, the monarch held a 45-minute meeting with Vice-President Yemi Osinbajo.

It was unclear what his second mission was about.

Earlier on Thursday, he had told journalists that due to the worsening insecurity in the country, the drums of war were sounding.

In the case of the South-West geopolitical zone, the monarch said the people were not ready to go to war with anybody but called for the tightening of security over lives and property.

Speaking after meeting Buhari earlier on Thursday, Ogunwusi had stated,  “I came to speak on behalf of other traditional rulers. The issue at hand in the South-West is real. The issue of insecurity, we that live in the remote and rural areas of the southwestern part of the country, most of the bushes are occupied by strange people and we decided to work with the government to fish them out.

“Everybody is beating the drums of war, we don’t want war, we want something better for our youths. We should use them for something good other than shouting war and anarchy. We don’t want that.

The monarch had also mentioned the alleged role of Fulani herdsmen in the killings, kidnapping and banditry in parts of the country, including the South-West, noting that the demand of the South-West was that the Federal Government should fish out the bad eggs among the herdsmen.

“We want to try as much as possible to work with the government right now. They have all the security apparatus and they are meant to defend us; that is what we are looking up to now. We have to stand up and meet with Mr President and he has given us a listening ear and you (will) see a lot of result going forward.”

But on Friday, when he came out of the meeting with Osinbajo, he declined to talk to reporters.

There was speculation immediately the Ooni shunned media interview that he might have been invited back to the Villa over his ‘drums of war’ comments for clarification.

However, when contacted, the VP’s office denied that the Ooni was summoned because of his Thursday comments.

But, the office still did not disclose the purpose of the second visit.