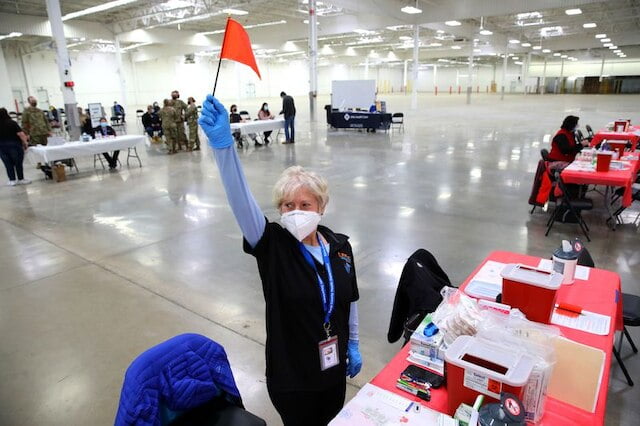 With Illinois expecting more coronavirus vaccine doses in coming weeks, some people may soon face a choice: which vaccine to get.

Vaccination appointments are still tough to come by, leading many people to take whichever vaccine they can get first, whether it’s been made by Pfizer, Moderna or Johnson & Johnson. Health experts are imploring people not to wait for one type of vaccine, saying they’re all effective at preventing death and hospitalization, and that rapid, widespread vaccination is needed to control the spread of COVID-19.

But with the newly approved Johnson & Johnson vaccine now available in Illinois, some people are actively seeking it out, while others are trying to avoid it — a task that’s easier in some places than others.

Cook County recently opened a mass vaccination site in Des Plaines that offered Johnson & Johnson vaccines during its first week, meaning people who wanted Johnson & Johnson could try to get it there and those who didn’t could avoid that location. Cook County has also announced which vaccines each of its sites will offer for next week. And Jewel-Osco has modified its website to allow people to choose appointments for Moderna and Pfizer vaccines or those made by Johnson & Johnson, depending on supplies.

But people looking for specific types of vaccines at many other pharmacies and sites must call the individual store or site if they want to know which shot is being offered on a given day.

“Pharmacies do not have control over which vaccines are in stock,” Walmart spokeswoman Rebecca Thomason said in a statement. People would have to call ahead to find out which vaccines are being given. “Due to the limited supply, customers can’t choose which vaccine they receive at their appointment.”

Mariano’s also does not now allow people to choose which vaccine to receive, given limited vaccine availability, spokeswoman Amanda Puck said in an email.

But the ability to choose a specific vaccine could become easier for people as Illinois continues to receive more doses and appointments become less scarce. Right now, searching for one vaccine in particular may mean individuals miss out on available appointments.

Searching for a vaccine

Some consumers have been wary of the Johnson & Johnson vaccine because its overall efficacy in clinical trials was 66% compared with about 95% for the Moderna and Pfizer vaccines.

Health experts, however, say it’s not fair to compare the overall efficacy rates of the Johnson & Johnson vaccine to those for Moderna and Pfizer. The clinical trials were done at different points in time, in different locations, with a key distinction being that the Johnson & Johnson trial took place after several mutations of the virus, SARS CoV-2, had emerged.

“Trying to compare one number to another is like comparing apples and oranges,” said Dr. Stephen Schrantz, a co-investigator in clinical trials of the Moderna and Johnson & Johnson vaccines at University of Chicago Medicine.

The most important numbers to look at are those showing the vaccines’ effectiveness at reducing hospitalizations and deaths, he said, and all three did that about equally.

Still, some people would rather err on the side of choosing the vaccines with the highest overall efficacy numbers.

S. Gayle Stevens, 65 of Downers Grove, recently received her first dose of the Pfizer vaccine, which she preferred over the Johnson & Johnson shot. She’s heard doctors explain why the overall efficacy numbers aren’t comparable, but she said she’s read more about the Pfizer and Moderna vaccines and is more comfortable with them.

She also understands that all three are equally effective at preventing hospitalization and death, but she would hope not to get sick at all, and, as a foodie, risk losing her sense of taste or smell.

Other people are hoping to get a Johnson & Johnson vaccine.

Johnson & Johnson only requires one shot, whereas Moderna and Pfizer require two — four and three weeks apart, respectively. People are considered to be fully vaccinated two weeks after the second dose of Moderna’s and Pfizer’s vaccines, and two weeks after the single Johnson & Johnson dose, according to the Centers for Disease Control and Prevention.

For many people, it’s more convenient to go to one vaccination appointment instead of two.

“When it’s my turn, which it won’t be until the very end, I’ll take what I can get, but I would rather go in for one shot,” said Ann Whinna, 46 of Inverness. “I have two small kids, and I don’t know how I will get to two appointments.”

Some people also prefer the Johnson & Johnson vaccine because it can mean less time in the car. In recent weeks, some have been driving hours from their homes for appointments because Chicago-area counties have not yet opened vaccinations to people in the 1b+ category, which includes people under 65 with certain health conditions, but some pharmacies and downstate counties have.

For those people, shopping around for the Pfizer vaccine can be tough. Jennifer Latourette, 48 of Aurora, spent weeks looking for a Pfizer vaccine for her 17-year-old son Aidan Latourette, who was born with heart conditions and has long had issues with his lungs. Even a cold can sometimes send him to the hospital, she said.

Latourette made Aidan three appointments to get vaccinated in recent weeks, only to have to cancel each one after she found out the locations were providing Moderna vaccines, not Pfizer ones. It would have been near-impossible for her to call those locations as she was making those appointments because spots have been so hard to get. Generally, people making appointments online at pharmacies have found that if they hesitate for even a moment while making an appointment, it gets snapped up by someone else.

After canceling that third appointment, Latourette called about a dozen pharmacies in her area to ask which vaccines they were providing. She then managed to make an appointment for him at one of the pharmacies with Pfizer shots, and he received his first dose this week.

After so much frustration, it was “such a relief,” she said. “I was almost in tears when I got that appointment.”

‘I just wanted anything I could get’

Most other people, however, should simply take whichever vaccine they can get first, said Schrantz, with University of Chicago Medicine.

“I would argue it’s more important to get a vaccine sooner” rather than wait for one type of vaccine, he said. “Every day that you’re out there, there’s a chance you could become infected.”

It’s also important to get vaccinated as soon as possible for the greater good, he said.

“As a population, the longer we wait to get people vaccinated, the more we’re dealing with the possible emergence of concerning variants,” he said. Every time the virus replicates, mistakes or mutations can happen in its genetic code, leading to variants. The sooner more people get vaccinated, the less chance there is for more variants to develop, he said.

Sammi Schnuer, 20 of Buffalo Grove, got her first dose of the Moderna vaccine Sunday. She qualified for the vaccine because of health conditions. She would have taken any of the three vaccines, she said, noting they’re all effective.

“I just wanted anything I could get … to not only protect myself but also protect others around me,” she said. Schnuer’s grandmother died due to COVID-19 in April.

In recent weeks, Schnuer, a Northwestern University student, has been helping others get vaccine appointments through the Facebook group Chicago Vaccine Hunters. She’s set up about 50 appointments so far and said none of those people has expressed a preference for one vaccine over another.

Lauren Schwanke, 36, of the north suburbs, also recently received her first dose of the Moderna vaccine after trying for several weeks to secure an appointment. She’s a five-year survivor of stage 4 appendix cancer.

She had no preference for one vaccine over another after her doctor told her that all three vaccines were safe and she should just get vaccinated as soon as possible.

“That’s all I needed to hear,” Schwanke said. ”Getting vaccinating this early is a way of saving others, and it is a way of saying thank you, in some ways, to my doctors. It’s the least I can do.”