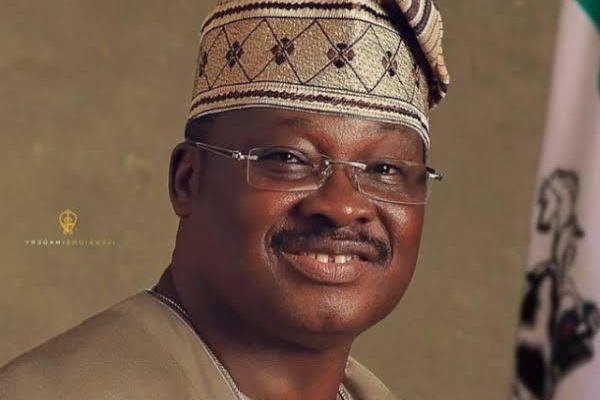 [No one comes to earth without a defect,
civil disorder is the defect of Ibadan]

As the 2015 – 2019 electoral term comes to an end, it is fitting to reflect on the performance of one of the outstanding political actors in the 2011 – 2019 class of Governors – Senator Isiaq Abiola Ajimobi. When I was approached by my friend and political comrade, Dr Wale Okediran to write this foreword, I needed no prodding from any quarters to jump at the opportunity of bearing witness to history and truth.

I met Senator Ajimobi in the field of politics in the early 2000s. Born into a prominent political family in Ibadan, he had just joined the progressive family of politicians via the Alliance for Democracy after a successful professional life in the oil and gas sector.

Likewise I just returned from the UK and became involved in policy work for the Federal Government and some of the progressive governments in the South West, particularly Lagos and Ekiti States. As an Ibadan boy, I decided to resettle my family in Ibadan and that was how our paths crossed.

In no time, he was elected a Senator representing Oyo South Senatorial District on the ticket of the party from 2003 to 2007. Having distinguished himself as an excellent representative of his constituents, it was no surprise to objective observers of his political trajectory that he decided to run for the Governorship ticket of the Action Congress which had emerged from the merger of Alliance for Democracy and the Action Congress of Democrats in 2007.

While I won the primaries of the same party in Ekiti State, he was surprisingly not the choice of the party in Oyo State in spite of the fact that he was really the person to beat. This development forced him to run on the platform of the All Nigeria Peoples Party unsuccessfully in 2007.

That experience prepared him with respect to surviving in the murky waters of local politics. It also provided him with the opportunity to demonstrate political dexterity in returning to the progressive fold, emerging the candidate of the Action Congress of Nigeria and winning the gubernatorial election in 2011.

In my humble opinion, Dr Okediran has painted a realistic picture without being hagiographic or obsequious. Often times, biographies in this clime turn out to be sycophantic adulation of the subject in a manner that is off putting to the average reader.

First, the book has done a good job in recognizing the tension often confronted by many professionals or shall we say technocrats who venture into politics in Nigeria. The difficulties associated with oscillating between the mores of tradition and the dynamics of modernity. As someone born and bred in Ibadan, it is a trait easily recognizable in Governor Ajimobi.

A boardroom guru for several years, one who reached the highest level in his chosen field, Senator Ajimobi is highly cerebral, diplomatic and unquestionably cosmopolitan. Almost in equal measure, he has a razor sharp tongue, and contrary to how the average politician reacts to marketplace noise with deadpan silence, he is unprepared to suffer fools gladly. The Ibadan in him is given full measure under the circumstance and he can be blunt to a fault..

The view has long remained unquestioned that technocrats do not make effective politicians. They are often seen as romantic idealists while professional politicians are seen as hard-nosed realists who correctly understand the imperfections of the political economy and maneuver accordingly.

In the Nigerian political dispensation, the inflexibly rigid technocrat and the chameleonic pragmatic politician represent two often contradictory paradigms. The former deals with the world as he wishes it to be – rule bound and rationally ordered, while the latter negotiates the environment as it is – chaotic, arbitrary, opportunistic and venal.

Ajimobi’s eight years in office has served to dispel this reductionist dichotomy, at least with respect to his delivery of good governance to his people. He came to the job having already achieved significant stature in industry and managed to defy this false dichotomy by combining technocratic experience and political savvy to win a stronger mandate for his second term in office in 2015 – the first to achieve this feat in the history of gubernatorial elections in the state.

What he brought to the table in my view was both a seasoned administrator’s eye for detail and abstract data and also a genuine passion for public administration and problem solving. Whether seeking to end insecurity of the most egregious roots in NURTW that has now turned the erstwhile garrison into a saner clime, or in transforming the urban jungle into a modern city-state, he consistently exhibited a flair for hands on delivery and clinical execution. The chaotic urban sprawl of Ibadan, probably the largest slum in Africa, might have been daunting and intractable enough to prompt less endowed leaders to surrender and settle for the mediocre.

For Ajimobi, it was a challenge that he attained with gusto. His mission as he saw it was to transform Ibadan from the densely populated squalor into a habitable, cultural and economic heartbeat of Yorubaland. He broadened this commitment to modernization to other parts of the state to the farthest ends of Oke Ogun, Ibarapa, Oyo and Ogbomoso axis and largely succeeded.

In spite of these exemplary accomplishments in security, infrastructural development, education, rural development and urban renewal, Governor Ajimobi may not be leaving office to deserved acclaim with his defeat in the senatorial contest and the loss of his party’s candidate in the gubernatorial race. Many reasons have been adduced for this development.

While some believe he is deeply insensitive to the plight of the ordinary people – who, ironically, are the beneficiaries of his reform agenda (and they often cite his encounter with Ladoke Akintola University students in the much quoted “constituted authority” saga or his treatment of the popular crooner of the masses – Yinka Ayefele) in this regard, others trace his problems to his alleged altercation with the Ibadan traditional institution – when he decided to create new kingdoms in the megalopolis.

Some even trace it to “unbridled arrogance” occasioned by his oft repeated “Koseleri” sobriquet while internal party squabbles is not left out as a factor in other circles or a combination of all these factors.

While it is not my place to question the validity of these claims, I believe psephologists and political scientists will do well to interrogate the sociological underpinnings of this development beyond the surface analyses that we have been subjected to. I think what happened calls attention to a desire on the part of the electorate for a systemic overhaul of our politics – a veritable form of the people’s revolt.

Having watched Senator Ajimobi, first from a distance and then at a closer range in almost two decades of personal acquaintance, he has always struck me as a sincere and genuine but largely misunderstood lover of his people and a committed bridge builder in politics. In the comity of South West Governors, he has always played the role of a conciliator between the eclectic political tendencies that necessarily emerge in modern politics.

I cannot of course say he has always succeeded in his conciliatory efforts but that has not stopped him from trying. He is also one politician who is effortlessly self deprecating. He is so full of wise cracks and Yoruba proverbs and his only match in this generation of Yoruba politicians is former Governor Olagunsoye Oyinlola of Osun State.

Unfortunately, many misconstrue his capacity to poke fun at himself as a streak of mischief and a sleight of hand. Senator Ajimobi is certainly not without foibles. Only God Almighty is without blemish.. After all, just as the opening lines from Ibadan’s renowned oriki depicts, no one comes to the world without a defect. In my own view however, his qualities far outweigh his defects.

But then, I may be readily accused of pro-Ajimobi sentiments and I’d plead guilty to that. However, another line in that oriki may speak more poignantly to the lot that befell Ajimobi in the hands of his Ibadan people – Ibadan ki gbonile bii Ajeji[ [Ibadan never blesses the natives as much as strangers].. So, this revolt of the natives may not be that uncommon!

I can attest to some of Governor Ajimobi’s leadership qualities as someone who worked closely with him on the Development Agenda for Western Nigeria Commission starting in 2013 when he played host to our meetings many times and undertook key responsibilities on behalf of the states.

A committed Federalist, Governor Ajimobi has been a leading proponent of greater autonomy for states, devolution of powers from the Federal Government, decentralized governance and fiscal federalism. In a profound manner, often in the middle of heated arguments, he would always remind his colleagues that Yoruba people are more comfortable with a leadership, rather than a leader. As he often says, Enikan ki je awade n’ile Yoruba.

In spite of all that has been written, this cannot be the definitive last word on Senator Ajimobi’s years in office. My own hope is that he would also put pen to paper and speak for himself and I very much look forward to his autobiography.

Until the arrival of the much awaited autobiography, I can confirm that this biography does justice to the life and times of Senator Abiola Ajimobi from childhood through his times in the corporate world, as a loving husband to his spouse who shares his vision and actively contributed to his success in office, a doting father and ultimately to the topsy-turvy world of politics.

That is why I recommend it to all who are interested in understanding the Ajimobi phenomenon beyond the surface.