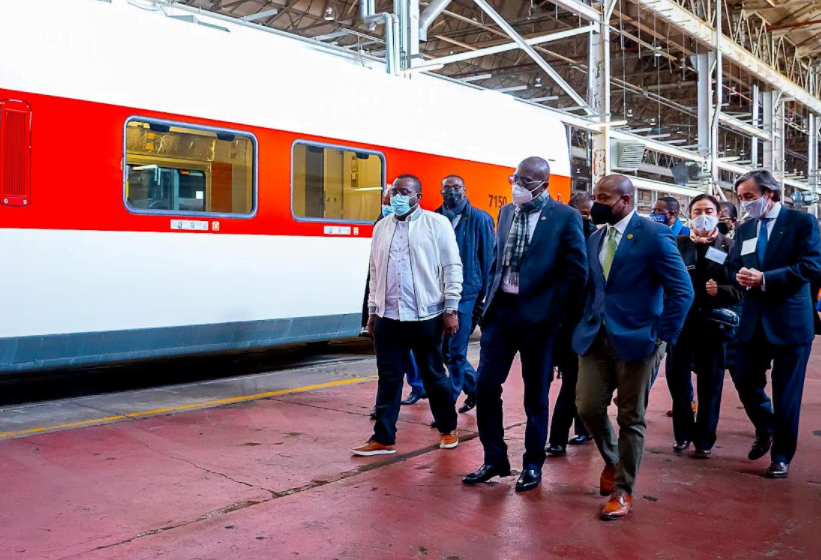 Babajide Sanwo-Olu, governor of Lagos, on Tuesday, visited the factory of Talgo Inc, a train manufacturer, in Milwaukee, to attend a ceremony ‘marking the purchase of two Series 8 trains’ for the red line train project in the state.

Milwaukee is the largest city in the US state of Wisconsin.

According to Milwaukee public radio (WPR), the two trains were originally designed for a high-speed rail line to connect Madison and Milwaukee in the US.

In 2009, Jim Doyle, Wisconsin’s then-governor, a Democrat, ordered the trains. The state was awarded $810 million for the project in a federal stimulus bill.  The project was dropped over contract terms with Talgo after Scott Walker, a Republican, took over from Doyle. It later resulted in a court battle.

According to the report, the trains are set to become part of ‘West Africa’s first operational metro system.’

Two weeks, Sanwo-Olu inspected the project, confirming that the first phase would commence operation before the end of the year.

The Blue Line is designed to start from Okokomaiko and terminate at Marina, while the Red Line runs from Agbado to Marina. The second phase will serve Murtala Muhammed International Airport in Lagos.

“The Red Line, a 37 km track with 11 stations, will be the first operational metro system in West Africa,” according to a statement.

“Construction of the Red Line was originally approved in 2008; However, the project was delayed by a previous administration.

“With a population of 27 million Lagos is the most densely populated city in Africa. It is estimated by 2025 Lagos will be one of the five most populous cities in the world.

“Lagos currently suffers from a congested transport system with limited rail transport and a developing road network with nerve-wracking traffic.

“There are approximately 6 million individuals with daily transportation needs. In light of this, Sanwo-Olu has committed to bringing the Red Line project to fruition during his administration.

“More specifically, the governor expects operation of the first phase of the Red Line to begin by the last quarter of 2022 with a capacity of 500,000 passengers daily.

“Upon completion of the second phase, the Red Line will serve Lagos’ Murtala Muhammed International Airport.

“The purchase of rail equipment built by Talgo with Milwaukee qualified workers opens the door to future orders and job creation.”

According to WPR, Cavalier Johnson, the acting Milwaukee mayor, welcomed Sanwo-Olu, saying ‘it’s a little bittersweet’ that Milwaukee missed out on the trains that should have been operational in Milwaukee and Wisconsin.

“I’m sending my congratulations to the governor in Lagos State in Nigeria, but also a little disappointed that we missed out on the opportunity to have those trainsets operating here in Milwaukee and Wisconsin,” the report quoted Johnson as saying.

Magodo Saga: Sanwo-Olu agrees to allocate 549 plots to landowners
The Lagos State Police Command has restored normalcy in Lagos Island area of the state after rival groups of hoodlums clashed and disrupted activities