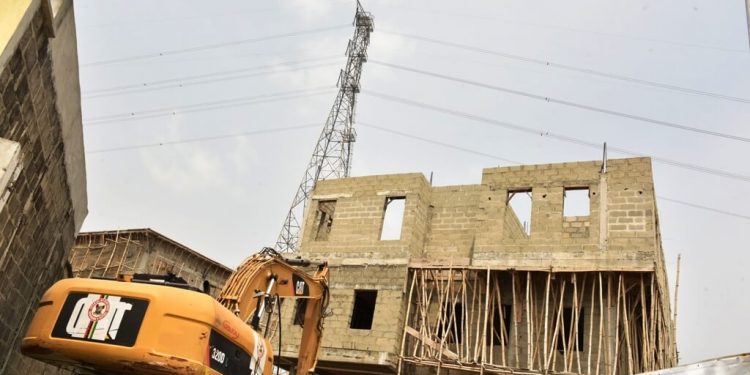 The Lagos State Government on Monday warned residents that it would no longer condone flagrant abuse of building laws and regulations of the State.

The State Government said it has noticed that many residents are building without due recourse to state agencies for approval and therefore advised people to desist from violating building regulations.

Speaking to journalists on Monday after the Lagos State Enforcement Team demolished some structures without compliance to the state building laws and regulations at Banana Island, Ikoyi, the Commissioner for Physical Planning and Urban Development, Dr. Idris Salako, said the enforcement became necessary because the State Government felt there was need to do something to halt the growing illegality.

Despite the stop work notice, construction works were still ongoing in two, while the other had fenced the land.

At 102 Close, K Zone, a section of the lagoon has been reclaimed with just the provision of a narrow drainage for water to flow.

As a result, the concrete and perimeter fence erected facing the lagoon were pulled down, while the building was sealed and the gate locked.

Also at 306 Close, three two-storey buildings under construction were pulled down for lack of approval to build as the development encroached on the state shoreline.

Apart from buildings and fences that were pulled down during the enforcement exercise, two people caught doing illegal dredging activities within the area visited were also arrested.

Salako said Lagos State Government agencies will continue to monitor to ensure that building laws and regulations are complied with.

He said: “The governor was here yesterday (Sunday) with the strong instruction that land reclaimed beyond what was approved should be demolished.

“We would continue to monitor to ensure that building laws and regulations are complied with and it should even be voluntary compliance.

“The gradual take over of the waterways is a problem.

“In our master plan, the regional highway ought to pass through a route, but there is gradual encroachment on the way.

“In terms of climate change, gradual reduction in the capacity of the lagoon to flow freely and the consequence the state would be made to grapple with in the future.

“If there is heavy down pour today, residents in Parkview Estate, on the other side of the lagoon, would be in crisis because their community would be flooded.

“This is because people built beyond what was approved.”

Speaking on why the two-storey buildings were pulled down, Salako said before the enforcement exercise was carried out, the developer had been served stop work notice three times, but they refused to obey the directives.

He said: “The buildings that were pulled down is a peculiar case because the owner and developer could not provide approval and clearance to reclaimed land he got from the State Land Bureau and Ministry of Waterfront.

“They blew up their survey.

“This means more land metres were taken than what was given approval for.

“And the 30 metres set back the developer was to observe was not adhered to.

“Also, the property is under an high tension wire.

“In all, the development has disobeyed all building laws in the state.”

Also speaking to journalists during the enforcement exercise, Lagos State Commissioner for Waterfront Infrastructure and Development, Kabiru Ahmed Abdullahi, said the State Government cannot continue to fold its hands and watch the degradation of its environment.

“We cannot continue to fold our arms and watch the degradation of the environment and continued blockage of the water channels on the waterfronts.

“We will clean it up and we will bring all the perpetrators of this act to book in line with the provisions of the laws.

“Banana Island has its own original boundaries.

“And those original boundaries are recognised and approved.

“So any development or reclamation beyond those original boundaries would not be allowed.”