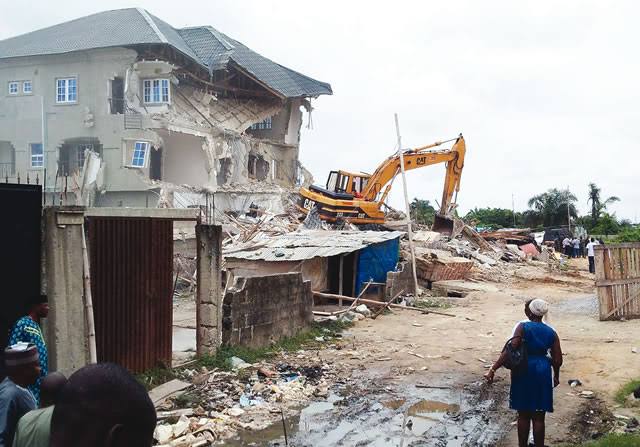 Inhabitants of Obalende in Eti-osa Local Government area of Lagos State, have decried the move by the State government in demolishing their houses under the disguise of remodeling the ancient community.

The Obalende residents, who claimed that the lands were given to their fore father’s, even before the 1914 amalgamation of Nigeria, by the then Colonial master, lamented the demolition of their structures, despite a subsisting court judgment, which barred the  State government, from encroaching the land.

The Lagos State Government has since last week Tuesday, commenced demolition of houses in the area.
Some of the houses demolished were sited at 20 and 51 Moshalashi street51, 69, 77, and a church at 83, all in Eleshin Street, a five storey buildings on Dodan barracks road and many others.

Rubbles of One of The Demolished Houses
The residents, who spoke on the demolition through the duo of Mr. Nurudeen Olaitan Olokowo and Pastor Jacob, thie Community’s chairman of the Landlords Association and an elder, respectively, appeal to the State government to respect the court judgment and give them necessary approvals to rebuild their houses by themselves.

Speaking on the demolition, the Chairman of Obalende Landlords Association, Olokowo said; “before the 1914 Nigeria’s amalgamation, this place that is called obalende, it’s been occupied by the colonial masters’ drivers. When they wanted to build King’s College and Supreme Court, those living there then we’re relocated to this place and it’s called ‘Obalende’, since then people have been living in Obalende. The then government, legalized the land to the people living there by given them lease, some of 100 years, some of 60 years, it’s varied.