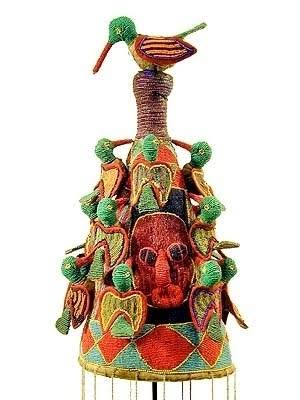 DEDUCTIONS:
This is an obvious abomination!
When you have a good case and you choose to follow the case in a wrong abominable way. It thus becomes sacrilegious intention to the land! The underpinning questions now are :

***THE ONLY MONARCHS WHICH THE ANCESTORS RECOGNIZED TO CONFIRM SUCH ROYALTIES REMAINED OBA LAMIDI ADEYEMI, IKU BABA YEYE, ALAAFIN OF OYO AND ONIRISA, OBA ENITAN ADEYEYE, THE AROLE ODUDUWA OF ILE-IFE.
NO OTHER OBA HAS SUCH POWER!

THE BIG QUESTION:
HOW CAN AN OUTCAST EXERCISE MONARCHIAL ROYAL POWER OVER AN ESTABLISHED RACE?

Consequently, those installed by OLUGBO are nothing but mere warrant Chiefs under Olugbo domain as body of warring factions against Yoruba/Oodua monarchs! It become a curse for any authentic Yoruba to either honour or respect them forthwith….

HISTORICAL FACTS OF OLUGBO AS A YORUBA DISSIDENT/OUTCAST OF ANCIENT UFE LAND (ILE-IFE):

Though a deity rarely speaks to the media, it has become imperative for me to shed light on our history as the Custodian and the living spirit of Oranfe, with a view to correcting the unfounded distortions inflicted on the history of our ancestors. (Thus,) making the place of Oranfe Onile Ina, clear in the history, especially now when founded and unfounded stories freely peddle around from many quarters. (This is) with particular reference to the disparaging statement on Yoruba history credited to Oba Obateru Akinruntan, the Olugbo of Ugbo land who simply believes money does it all.

Oranfe is the god of lightning and thunder sent by Eledumare to the universe. (He had) his primary abode at Oke-Ora as a god and had his house built of fire both in heaven and his earthly abode on Ora hill (Oke-Ora) in Ile-Ife then known as Ife Oodaye. That was why he was referred to as Oranfe Onile Ina (Oranfe owner of the house of fire).

All his fellow gods and warriors feared him because of his mystical power of lightning and thunder and the power to emit naked fire from his mouth given to him by the Almighty Eledumare (God).

Due to his enormous power and the constant exchange with the unseen beings, he was usually alone on the hill of Ora (Oke-Ora), and only descended on the order of Oduduwa (His Supreme Head) to attend to his subjects and perform some rituals and sacrifices which he usually carried on in the afternoons (Osangangan) for the cleansing of the land on a routine basis, that was why he was nicknamed Osangangan, while Obatala carried his own sacrifices very early in the morning (Kutukutu Owuro) on the order of Eledumare through Oduduwa. It was not possible for ordinary humans who were not spiritually fortified to see Oranfe eyeball to eyeball except Oduduwa and direct descendants of Oranfe, even up till today, because of the enormous power he possessed.

Obaluru is the head of Ile Oranfe, his living spirit and heritance. Oranfe had many wives including the popular three, Oru, Osara, Akinsin, among others, he also had several children and grandchildren spreading across Ile Oodua (Yoruba land) and beyond. Oru begat Obamakin, the father of Olugbo, Woyeasiri, Oluyare among others. I will only limit my position for now on Olugbo, my grandson.

Although Oranfe was a god-King, further studies of Yoruba cosmology revealed that when the gods/deities were coming from heaven (Ikole Orun) to earth (Ikole Aye), all the gods were ordered by Eledumare to work with Oduduwa on earth among whom were Oranfe. Eledumare gave the Ase (spiritual authority) to Oduduwa over all other god-kings, which symbolizes that Eledumare created the earth primarily for human beings. Oranfe was given special power above so many gods/deities, that was why he was called Oba Igba irunmole (King of 200 deities), while Oduduwa being the supreme head of all god-kings/deities was referred to as the Oba Okan le nirinwo irunmole (King of 401 deities) which is one of the several titles of Ooniriisa (the owner of the gods) till date.

Although on several occasions, this supreme authority given to Oduduwa by Eledumare generated a lot of disagreements among the gods on why he would exercise supreme authority on them, but each time Ifa Olokun (Oracle) was consulted, they were all warned not to question this divine arrangement by Eledumare. Digging deeper is like questioning the existence of Eledumare, naturally because of this they all “Wori” (Pay homage) to him as the father of all beings, kings and gods on earth, till today. Obaluru (Oranfe) being Oba igba Irunmole under Oduduwa, Oba Okanlenirinwo irunmole still pay homage (Wori) to any reigning Ooni as a sign of humility and respect as directed by Eledumare. Further details will be unveiled in my subsequent publications.

EVICTION OF OBAMAKIN FROM ANCIENT UFE LAND:
Obamakin was a known warrior and a brave man, who doubled as a liaison officer for his father Oranfe Onile Ina. Yes, Oranfe, the father of Obamakin had so many children from his other wives but his most beloved wife Akinsin was childless. One day Oduduwa called Oranfe and few other gods to accompany him on a journey (this culture is still in practice in present day Ile-Ife), that might take them many days, months or possibly years to return.

Oranfe, being very old then needed to apportion some properties to his wives and children. Akinsin, his most beloved wife was given a piece of land on which Obamakin had been farming temporary for a while, and he gave other valuable materials and properties out to other wives and to each of his children. Then he proceeded to Ile Idio to meet Oduduwa for the journey.

As soon as Oranfe left for Idio (Oduduwa’s place) to embark on the journey, Obamakin having felt that Oranfe had embarked on a long journey in which he was not likely to come back alive considering his age then, and being a warrior, felt it was Oranfe’s grand plan to dispossess and deny him what he considered his inheritance. He then planned a full scale war against Akinsin his father’s wife. As at then, Obamakin was around 29years, and had gotten children of his own, he called his loyal warriors and friends to assemble at a place called Iloromu (Meaning a place where the wickedness of man resides), which is still in existence in present day Ile Ife. Obamakin launched a surprise attack on Akinsin (Oranfes wife), which led to her being chased away and dispossessed of her apportioned land.

While that was going on at Oke Ora, Oranfe, being a powerful god-king sensed something was wrong at home, he then sought the permission of Oduduwa to go back home as his house was in crisis. As the news of Oranfe coming home unexpectedly got to Obamakin, who had started exhibiting arrogance and rebellion against his father (by changing his name to Obamakin Osangangan, living the life of affluence and oppression of people), quickly called his warriors that Oranfe was closer to Oke Ora and that could mean a doom for him if he should get home seeing his beloved wife sent away and disposed of her right.

Obamakin then decided to run away. He embarked on a journey to an inhabited place called Iwinrin/Igbo Ugbo (forest of the vultures). It was there they became wild as a result of hunger and famine, it should be noted that at this place called Ugbo, Obamakin made love to one of the slaves that accompanied him in the rebellious journey who gave birth to Omo Olu Ugbo, later pronounced as Olugbo.

Meanwhile other warriors that followed him settled around the Ugbo community for constant propitiation of the gods and ceremonial rituals. (Detail in my subsequent release).

Having narrated the Olugbo story above, I’m quite surprised at Oba Fredrick Obateru Akinruntan’s ignorance of history as a traditional ruler. Olugbo should have contacted the elders in Ugbo land, who will orally transmit his place in history to him. He should stop acting like somebody who lacks a parental guidance when growing up as a child, it’s so disgusting and unheard of a man not to talk of a traditional ruler disregarding Oduduwa, the Progenitor of Yoruba race.

It’s a shameful act and an abomination for a Mere Mortal Akinruntan to challenge the prestigious throne of Ooniriisa to confirm his ancestral home. Bolaji Olowoaje (1912) of blessed memory described Ooni as the owner of diffused monotheism, a religion of gods many controlling about 401 deities within the framework of awesomeness of high God. That is, Ooniriisa is above all the deities/king that comes under the name of Eledumare.

To set the record straight, Oranfe was one of the god-king placed under Oduduwa by the Eledumare. Obaluru, being the living spirit of Oranfe, is a king under the supreme leadership of Any reigning Aaroole Oodua/Ooniriisa. It is the responsibility of a father to tell his children where they belong; Ooni’s stool is a sacred one which should not be challenged by any mere mortal.

As much as I recognize the burning need of Oba Obateru Akinruntan to establish his root, he should have simply contacted Ile-Oranfe in Ile ife to really know where he truly belongs, rather than making abominable claims, which may bring curses upon himself and his generations yet unborn.

Olugbo is a product of a rebellious son of Oranfe, Obamakin. Fredrick Obateru Akinruntan should stop acting like a bastard that grew up to destroy his father’s heritage according to Yoruba proverb ‘Ile to n toro, Omo ale ibe ni koti dagba’.

I will at this juncture appeal to every well meaning people of Yoruba nation, most especially the people of Ugbo to ignore the misleading and disparaging statement credited to the attention seeker king, Oba Obateru Akinruntan, challenging the sacred stool of Ooniirisa. Who are we mortals to challenge the process of Eledumare?

For the umpteenth time, I wish to reaffirm that Ooniriisa and Arole Oodua, remains the father of all and the Supreme head of Oranfe and all other god-king. “A child that wishes to inherit undue, will tell unfounded stories” (Omo toba fe je ogunkogun, itan kitan lo man pa).

CONCLUSION:
It has been made crystal clear the place of Olugbo traditional chieftaincy stool as regards to Oranfe lineage, and that Oranfe stool does not predate the ascendancy of Oduduwa (Progenitor of Yoruba race), it has further been revealed that the Paramountcy of Oranfe onile ina is unquestionable and well established regardless the erroneous belief of my grandson Olugbo, that Obamakin was the founder of Ile Ife.

I, as the custodian of the living spirit of Oranfe, strongly warn Oba akinruntan to desist from this abominable attitude of his. A word is enough for the wise! He who gods will destroy, they first make deaf!