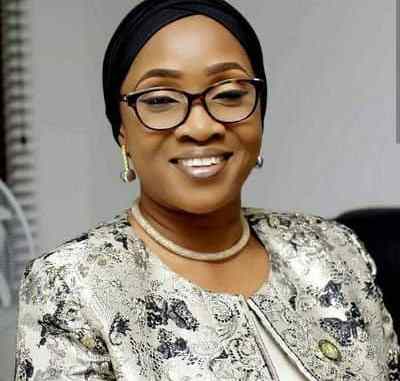 The Independent Corrupt Practices and Other Related Offences Commission (ICPC) has dismissed insinuation that it has jettisoned the investigation of an N1.68 billion illegal assets allegedly traced to a serving commissioner in the Lagos State government.

The anti-corruption body, on Monday, disclosed to PeesReporters that it is still investigating the state Commissioner for Tourism, Arts and Culture, Mrs Uzamat Akinbile-Yussuf, over the allegation.

According to a report published last April, the ICPC beamed its searchlight on the commissioner for her alleged involvement in the illegal assets acquisitions, amounting to N1.68 billion.

Following a lull in the speed of the investigation, speculations were rife that the case might have been swept under the carpet, just as it was also alleged that Mrs Akinbile-Yussuf was trying to buy her way and get the matter buried.

However, findings by PeesReporters revealed that the speculations were not true as the anti-corruption body disclosed that it is still investigating the matter, with a promise to make its findings public soon.

When contacted, Mrs Azuka Ogugua, who was appointed the spokesperson of the ICPC last June, wrote in a short WhatsApp message: “ICPC is investigating the case and the outcome will be disclosed in due course. Thank you.”

The commissioner, Mrs Akinbile-Yussuf, also dismissed the insinuation that she was trying to buy the case, as she said she had been invited by the ICPC over the matter.

Responding to an inquiry from PeesReporters, the commissioner, also in a short WhatsApp message, on Monday, wrote: “Good morning, this was reported on the 12th of April by Vanguard Newspaper, so it is not a new [sic] to the media.

“And I’m happy to inform you that ICPC has invited me for enquiries, I believe they will make there [sic] position known when they are done.
Thanks.”

Recalled that the Vanguard Newspaper had reported, in its Sunday edition of 12 April, 2020, that the ICPC had commenced a probe of the N1.68 billion assets linked to the Lagos State commissioner.

A group, Parrot Deed International Network, in a petition, dated 2 March, 2020, and addressed to the ICPC Chairman, accused the commissioner of “official corruption, unlawful enrichment and conversion of public fund for personal use.”

As listed in the petition, the N1. 68 billion assets included a hotel worth N900 million, a shopping mall worth N450 million, a pharmacy worth N150 million and a fuel station estimated at N180 million.

The group had alleged that Akinbile-Yussuf, who reportedly served as a commissioner in two ministries between 2015 and 2019 before her present position under the Governor Babajide Sanwo-Olu administration, acquired some properties between 2015 and till date with questionable funds.

In a related development, the embattled Lagos State Commissioner for Tourism, Arts and Culture, Mrs Uzamat Akinbile-Yussuf, may be in for more harsh moments in the face of strident calls for her removal from office.

Sources in the ministry accused her of high-handedness and called on Governor Babajide Sanwo-Olu to probe her activities and eventually sack her, if she is found guilty.

Among others, Akinbile-Yussuf is alleged to be the brain behind the plot to remove the Director of the state Films and Video Censorship Board, Mr Bamidele Balogun and also at a loggerhead with the Special Adviser, Tourism, Mr Solomon Bonu.

The commissioner was alleged to have plagiarised the concepts for the event organised by the state government and held, last week, to mark Nigeria’s 60th Independence Day anniversary.

It was further alleged that she has been taking advantage of intellectual properties of stakeholders in the entertainment and tourism sector in the state and for personal use and to run her Moremi Foundation.

“Those who care to know more about the plagiarism by the Moremi Foundation should take a quick glance at her Facebook Page and see “MOREMI PUTS LAGOS AND NIGERIA IN GUINNESS BOOK OF RECORD”. It is quite unfortunate how she is taking glory for yet another state-sponsored event in collaboration with stakeholders.

“She has become a demigod in the ministry. She does not know how the operators of the tourism and culture sector in the state operate. They have complained to stakeholders in the industry about their reservations about this commissioner.

“One should wonder why Lagos State, the heartbeat of entertainment and acclaimed Centre of Excellence, is yet to get it right in creating an enabling environment for entertainment to thrive in the state. Rather, entertainers in the state have been left to their faith with the popular slogan, ‘On Your Own’.

“A former female commissioner in the ministry was, early this year, relieved of her duty for incompetence and reckless misappropriation of funds.

“While the ministry was trying to recover from the dilemma, the present commissioner, Mrs Akinbile-Yusuff, a pharmacist by training, is on the verge of finally causing the collapse of the entertainment heartbeat of the state, with different allegations on plagiarism and incompetence.

“It is getting too unbecoming and unethical for a regulatory body like the Lagos State Ministry of Tourism, Arts and Culture, which ought to be seen collaborating and supporting relevant stakeholders in the creative sector, now gradually turning into event planners and project executors.

“It is a thing of serious worry and great concern to many stakeholders in the tourism sector that Madam Akinbile-Yussuf has refused to face the humongous task ahead of her, but she is rather focusing on plagiarising all documents sent by stakeholders in partnership with the ministry.

“Governor Babajide Sanwo-Olu, during his campaign promised a robust relationship between the state government and the entertainment and creative sector. He thus requested that a blueprints on how to grow the industry to be sent to him for concession.

“Mr Governor has been a man of his words with a resolve to take Lagos State to a 21st century. But with his Commissioner for Culture and Tourism Madam Akinbile-Yussuf, how would he achieve his vision?

“The Eko Theatre by now should have been commissioned to relevant stakeholders on a Private Public Partnership (PPP) arrangement in order to generate revenue for Lagos State but rather it has been left in care of the ministry to take charge and executive all project,” a source said.