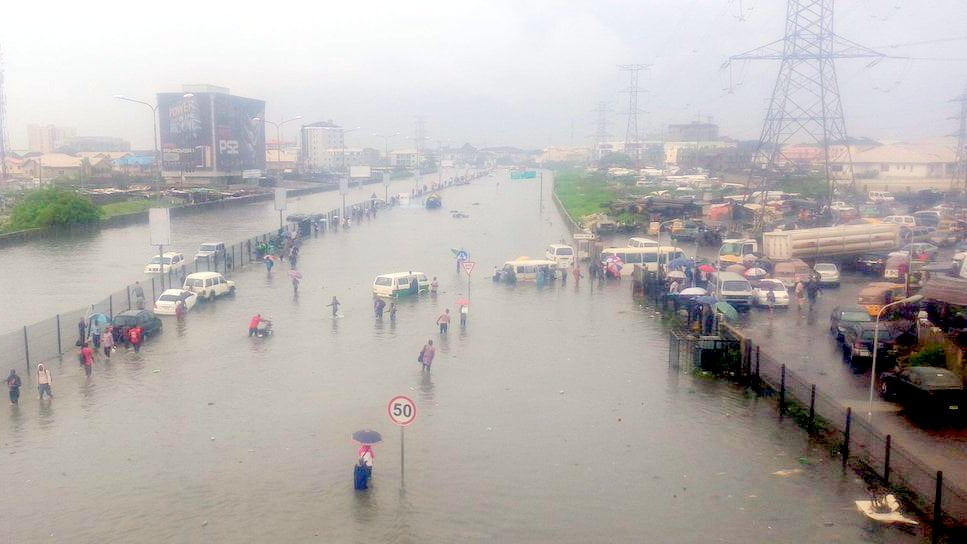 Residents of Lagos State have been enjoined to imbibe utmost safety precautions in view of the ongoing heavy downpour in the State.

The warning was issued on Friday by the National Emergency Management Agency following heavy downpour.

The downpour, which left a lot of areas heavily flooded and residents driving in chaotic traffic for hours, began in the early hours of the day all around the state.

It took close to six hours minimum to drive from Lagos Island to the mainland, depending on the area.

Even within the Mainland and Island, several hours were lost to traffic.

Several vehicles were submerged in flood water where they were parked, with houses witnessing same.

Those walking had to contend with the flood, with some almost completely under the flood water.

According to NEMA Zonal Coordinator, South West Zone, Ibrahim Farinloye, Lagos residents must take note of the road and bridges in their routes to make them clear for use.

They must also avoid driving when the flooding water reaches half of the wheels of their vehicles.

Farinloye said: “Once the rainwater gets to this level on your vehicle it sweeps off your vehicle.

“Kindly park and move on to higher ground for safety.

“Those walking must avoid trekking now.

“The rainwater must have risen above our ankles.

“Once it happens like this, the flooding water have the capacity to carry us off.

“Teachers are also strongly advised to keep the children back in classrooms, no matter the time frame the rainfall last in other to safeguard the lives of the children as they are fond of playing in the rain.

“People living in buildings that are known to have signs of danger must report to the appropriate Agencies for assistance.

“The 2021 Annual Flood Outlook has predicted more flooding to be experienced in those 13 Local Government Areas.