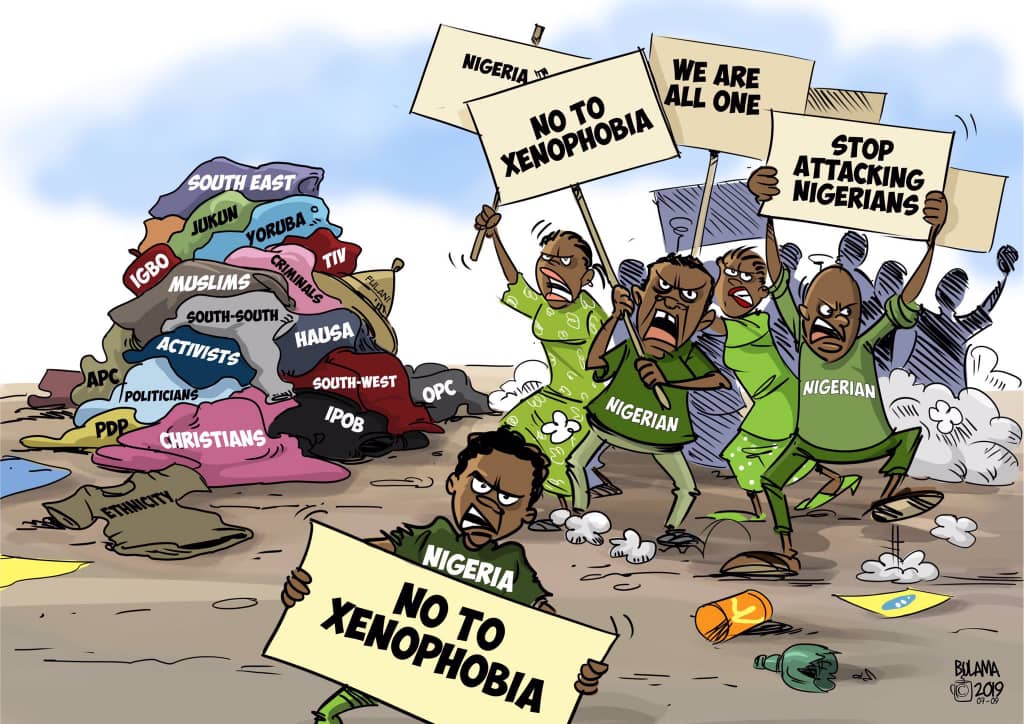 In our world today, Nigeria has risen to the level of a global giant in the mould of the United States and Isreal; a figure of hate. So I think the word “xenophobia” in relation to the attacks against Nigerians and the abuses, is hiding something more evil.

Nigerphobia is the sentiment that espouses a dislike of Nigeria, particular amongst other African countries. Just as the Arab world hate and resent Israel and opposition to the US government, especially in regards to its foreign policy by the rest of the world, is not stopping America and Israel from rising, Nigeria Rising is the only way forward.

Discussions on what I wish to refer as “AntiNaijaism” have in most cases lacked a precise explanation of what the sentiment entails beyond a general dislike. Wetin we do?

From Addis Ababa to Kampala to Nairobi to Harare to Banjul, Accra and Johannesburg, the entire black African nations are shouting “Nigeria this, Nigeria that”
Perhap, considering that Nigeria is not even the largest population of black foreigners in South Africa, and perhaps in the lower ladder, the question should be, “wetin Naija no do?”

I have heard people ask “I’ve been told that Nigerians sell drugs.” But I haven’t heard anyone say they bought drugs from a Nigerian. But the most stupid comments I have read are the ones that suggested that “actions by Nigerians were to blame for the rise in AntiNaijaism.” Really? Wow! So why these elements watch movies Nachos on Netflix, hail the likes of Escobar and El Chapo, and show zero dislike for Columbia or Mexico, it is the “actions of some Nigerians that are to blame for AntiNaijaism?” Kneel down there!!!

Well, let’s get some details. Of the 1.3billion Africans today and of the 700 million Black Africans, over 200 million call Nigeria home and another 4 to 5 million call other African countries “our second homes.” And of the 150 million projected to be born in Africa between now and 2040, 35 percent will be born in Nigeria. But this is not just about population and “ihe amuru amu.” These figures may also explain why “every black man who does something bad is considered first a Nigerian, before being considered as African.”

Nigeria is the richest country in Africa and has the highest number of billionaires. In fact, of the 20 richest men and women in Africa, 14 are Nigerians; the richest black man in the world is also a Nigerian. By the way, since Alhaji Aliko Dangote opened a small cement factory in Ethiopia, Nigerian men over there have become hot cakes around Addis Ababa area for the women over there; some of the women are even flying to Nigeria weekly to get hooked to a “Nigerian millionaire.” Then “akpa ha, ha ebewe.” In other words, AntiNaijaism may be breeding slowly because these foreigners allowed their greed to activate the “sharpness” of the Nigerian based on the agreed principle of “mugu fall, mugu chop.” And nobody is above falling, including Nigerians.

But it is still not all. Then, nke na agba ha ara is that, out of the over 40 million Black Americans, 3 million of them have first generation link to Nigeria; and nobody will really be surprised if the DNA of the over 80 percent of the remaining 37 million were to situate their origins in Nigeria.

And while Nigerians represent the most educated migrant class from Africa living in America, they continue to make Africa proud in the field of medical science, technology and business. In addition to their educational curriculum, they are also leading in the over all inter ramic curriculum as they inject love into the lives of our Caribbean and Hispanic and other black Africans to produce young men and women who eat egusi, dry fish, friend plantain and beans. Nigeria is like MTN sorry, GLO; “everywhere you go now.”

So, it is understandable that the Negative views of Nigeria or its influence are widespread and
relentless toward Nigerian way of life- social, economic, traditions, and values. Many claim that our values end with money. Ironically, the critics are always coming to Nigeria in search of wealth through the backdoor of our weakest link- corrupt political institutions and leadership.
Yet, somehow, they maintain a sort of allergic reaction to Nigeria and Nigerians in their country and accusing Nigerians of creating a mess on foreign lands.

And it is not as if other African nations have better political cultures or are less corrupt than Nigeria. For example, when they try to justify their “AntiNaijaism” they claim that Nigerians are selling drugs, doing fraud, and bringing counterfeit products. But this alone should reveal to any critical mind that these people are either very dishonest or intentionally deceptive because, they conveniently forget that 1) Nigerians don’t control their airports and the seaports from where the drugs and fake goods come into their countries. 2) that the goods are produced in China and shipped to their countries, not from Nigeria, but from China by the Chinese and 3) that these items are cleared by their own Customs. Look at these people o? Ndia wukwa ezigbote bussu o!

Despite these daily realities, these people still manage to believe Nigeria to have an irredeemably evil nature and ascribing to Nigeria a hidden agenda aimed at completely dominating Africa. Since when is “igba mbo” evil? By the way, in which areas have we not dominated?

Thus, AntiNaijaism continue to manifest in so many ways around the globe, especially amongst Africans, ranging from expressions of hatred or direct discrimination against individual Nigerians by mobs or state police on Nigerian communities. They don’t hate their Customs and homeland security that allow the drugs and the fake goods into their countries; they don’t hate their financial institutions that control the wires and transfers; and they don’t even hate the officially listed and globally recognised cocaine producing countries like Colombia, Peru and Bolivia, and the official big marketers like Brazil and Mexico, who send it in containers to their countries. But it is Nigeria and the few Nigerians who smoke just like others (them) that they are afraid of?

I think the time has come for Nigeria to rise even higher and achieve more for a better and greater Africa and keep dominating every area of life in Africa despite the hate; including the inter Rama sector. Nigeria is Rising Despite “AntiNaijaism.” God bless.