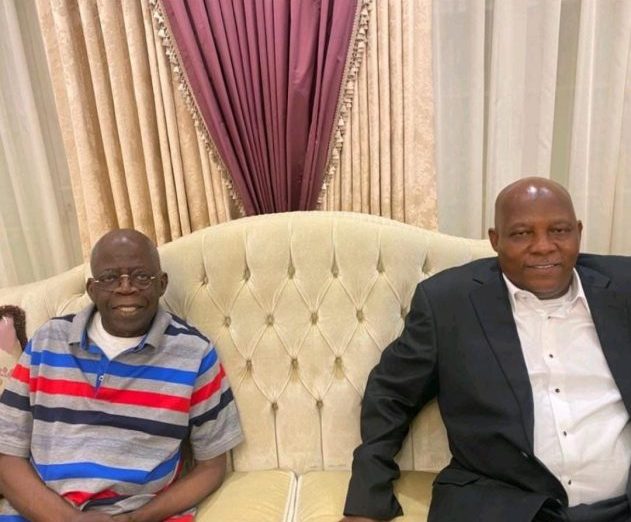 Barring any last minute change in plan, Senator Kashim Shettima is the running mate of the All Progressives Congress presidential candidate for the 2023 polls, Asiwaju Bola Ahmed Tinubu.

Competent sources in the Bola Ahmed Tinubu Campaign Organisation confirmed this on Sunday.

The News Agency of Nigeria also reported in one of its bulletins on Sunday that the vice presidential candidate will be unveiled to President Muhammadu Buhari, who is the leader of the party in his hometown in Daura, Katsina State on Sunday (today).

President Buhari has been in Daura since Friday for the Eid-el Kabir celebration.

He is expected to return to Abuja on Thursday.

Before now, the party had submitted the name of Kabir Masari, who is from Katsina State, as placeholder vice presidential candidate.

The Eagle Online was told on Sunday that Shettima will be unveiled to Buhari on Sunday before his name is made public during the week.

He played prominent role in the pre-presidential primaries campaign of Tinubu and has remained visible with the former Lagos State Governor since then.

Shettima, the representative of Borno Central Senatorial District, was a former two-term Governor of Borno State.

He was born on September 2, 1966 in Maiduguri, the Borno State capital, to the family of Sir Kashim Ibrahim.

He is married to Nana Shettima and they have three children: two females and a male.

He speaks English and Hausa fluently.

According to Wikipedia: Shettima attended Lamisula Primary School in Maiduguri from 1972 to 1978; Government Community Secondary School, Biu in southern part of Borno State from 1978 to 1980; transferred to Government Science Secondary School, Potiskum (now in neighbouring Yobe State), where he completed his secondary education in 1983.

He studied at the University of Maiduguri and earned a Degree (BSc) in Agricultural Economics in 1989.

He had his one-year compulsory membership of the National Youths Service Corps at the defunct Nigerian Agricultural Cooperative Bank, Calabar, capital of Cross River State, in South South, Nigeria from 1989 to 1990.

He obtained a Master’s degree (MSc) in Agricultural Economics in 1991 at the University of Ibadan in South West, Nigeria.

Shettima joined the University of Maiduguri as a Lecturer with the Department of Agricultural Economics and was in the academia from 1991 to 1993.

In 1993, he moved into the banking sector and was employed by the now defunct Commercial Bank of Africa Limited as head of accounts unit at the bank’s office in Ikeja, Lagos State, South West, Nigeria.

In 1997, he crossed over to the African International Bank Limited as a Deputy Manager and rose to become a Manager in 2001.

In 2001, he moved to the Zenith Bank as head of its main branch in Maiduguri.

Shettima worked with the Commercial Bank of Africa as an Agricultural Economist at its Ikeja Office, Lagos State (1993-1997).

Later he became Commissioner in the Ministries of Local Governments and Chieftaincy Affairs, Education, Agriculture and later Health under his predecessor as Borno State Governor, Ali Modu Sheriff.

In the January 2011 primaries of the All Nigeria Peoples Party, Engineer Modu Fannami Gubio was selected as candidate for the governorship poll.

However, Gubio was later shot dead by gunmen, and Shettima was selected in a second primary in February 2011.

He was Commissioner of Local Governments and Chieftaincy Affairs (2008), Education (2009), Agriculture and Natural Resources and finally to the Ministry of Health from where he contested the governorship in 2011, which he won on the platform of the now defunct ANPP.

He won reelection in 2015 on the platform of the All Progressives Congress and was chosen as the Chairman of the Northern States Governors’ Forum, an umbrella body of Governors in the 19 States located in northern Nigeria.

As Governor of Borno State, he has efficiently managed challenges arising from the Boko Haram insurgency which he inherited in 2011.

With the approval of the National Security Adviser and the Nigerian Army in 2013, his government formalised the establishment of youth volunteers called the Civilian Joint Task Force.

The volunteers have played very significant role in supporting the military in ongoing fight against Boko Haram insurgents.

He approved salaries, kits and patrol vehicles for the civilian JTF, while at the same time giving so much support to the Nigerian Armed Forces.

He leads in mobilisation of community-based intelligence gathering and the provision of hundreds of patrol vehicles and material logistics to the military in particular and to all other security agencies.

In September, 2014, Maiduguri, the seat of Government became very vulnerable to being occupied by insurgents.

The fear was so intense that notable residents relocated their families to Abuja.

However, amidst such fright, then Governor Shettima, who was out of the country for an official assignment, returned to Maiduguri in a show of courage and patriotism.

On his return, the former Governor mobilised residents towards rising up in defence of their ancestry.

Although Maiduguri didn’t fall, the insurgents succeeded in occupying 20 out of the 27 local government areas of the State before the Nigerian Armed Forces liberated them between 2015 and 2016.

Former Governor Shettima’s leadership credentials have attracted positive recognition within and outside Nigeria.