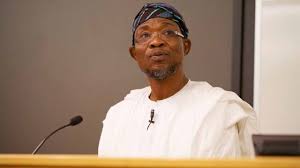 Justice Olamide Oloyede of an Osun State High Court, who was forced into retirement by the National Judicial Commission in 2016, has been reinstated.

According to findings, Justice Oloyede was reinstated by the NJC at its meeting held on Wednesday, May 11, 2022, after the judge had won the case instituted against the body before a Federal High Court sitting in Abuja.

But after scaling the hurdle of the NJC, Oloyede was not issued a letter confirming her reinstatement until Wednesday, June 1, 2022, by the Osun State Judicial Service Commission.

Justice Oloyede’s ordeal began in 2016 after writing a petition against the then Osun State governor, Rauf Aregbesola, and asking the state House of Assembly to launch a probe into the allegations raised against him.

Miffed by the conduct of the judge, the Osun Civil Societies Coalition petitioned the NJC, demanding Oloyede’s sacking and the body, relying on the submissions of its fact-finding committee, said the judge failed to conduct herself in such a manner as to preserve the dignity of her office, impartiality and independence of the judiciary.

But Oloyede, having challenged the dismissal through her counsel, J. Daudu, got a favourable judgement from an Abuja Federal High Court in June 2021.

Her reinstatement by the NJC was said to be in compliance with the decision of the court, since the judgement was not challenged.

Efforts to get official confirmation of Oloyede’s reinstatement failed as calls to the Chief Registrar of the High Court, Mr. Lasisi Adebayo, did not go through.

Also, a reply to a text message sent to him by our correspondent on Friday was still being awaited as of the time of filing this report on Saturday.

However, a kinsman of Oloyede from Ilesa, Wole Oladapo, in a Facebook post announced the reinstatement of the judge.

The message shared by Oladapo read in parts, “To the glory of God and continued service of mankind, Hon. Justice Olamide Folahanmi Oloyede, after winning her case at the Federal High Court, Abuja, has been reinstated as a judge of Osun State High Court on the 1st of June, 2022 after a long, torturous journey.

“I must sincerely appreciate all that God used and equally appreciate those that allowed the devil to use them in making this triumph of good over evil very sweet.”