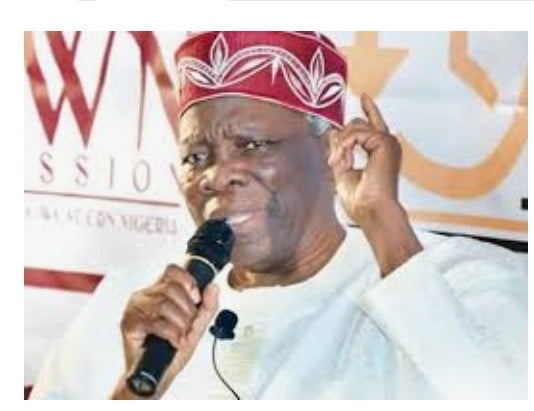 Yoruba leader, Prof. Banji Akintoye, has said only the pursuit and attainment of self-determination will save the Yoruba from being continually dragged down by Nigeria and ultimately from being destroyed by the persistent onslaught of Fulani herdsmen and militia terrorists, their promoters and backers, and their allied International terrorists like Boko Haram from the Nigerian North East, ISIS from Syria and Iraq, Al Qaeda from Libya and Al Shabaab from Somalia.

In a statement released yesterday after a meeting of the Ilana Omo Oodua, of which he is the president, Akintoye welcomed the convergence of views among Yoruba groups around self-determination as the only viable option available to the Yoruba in the present perilous circumstances.

“I wholeheartedly welcome the growing realization by more and more of our people and our Yoruba leaders that restructuring of Nigeria or Constitutional reforms for Nigeria is no longer appropriate for the real needs of the Yoruba Nation today, and that we Yoruba must now join hands to seek self determination for our Yoruba nation out of Nigeria

The Yoruba nation must now rejoice that our leaders now recognize that restructuring is a distraction and deceit. It is a road to nowhere.

“Now that most of us have come to the decision to seek Yoruba self determination, we must quickly design ways to establish effective collaboration of all of us in this struggle. We are a civilized and civilization building nation, and an educated and sophisticated people. We must now show to our people that we command the education, the cultural sophistication, and the intellectual and professional capabilities to set our nation free and to make our free nation prosperous and powerful in the world.

“This is no longer surreptitious but glaring and open declaration of war on our people.

“For them to consider starving us at all, the hostility in their spirit against our people must have been terrible.

“Saying now that the attempt to starve us to death has failed, we must thoroughly investigate the persistent suspicions of massive food poisoning from the North.

He then challenged the Southwest leaders across board, but especially the State governors, to see the food blockade as an eye-opener and wake-up call to go back to agriculture to ensure food security for our people.

“Obviously, the objective of the Fulani herders and militias for destroying our farms, farmers and farming villages in the past five years has been to force us to become totally dependent on the North for all our food supply so that they may suddenly stop food supplies from the North and thereby plunge us into total starvation and ruin.

“Now, we have seen how these people will turn any thing in which we may depend on them to become weapons against us.

” And it is potent reason why the Yoruba must chart an independent course for themselves.

“We again welcome every Yoruba group to the realization that Yoruba self determination is the road forward.

Akintoye said since he was elected the Yoruba leader in 2019 at Ibadan by about 40 Yoruba Self-Determination groups,he has worked assidously, first within the Yoruba World Congress and now with Ilana Omo Oodua, to defend, advance, and promote the goal of a Yoruba nation.

We have contributed very significantly to the mobilization of the Yoruba Diaspora across the world in order to ensure international support for the Yoruba struggle. We have secured the admission of the Yoruba nation into the UNPO. We have also joined hands with our freedom seeking compatriots from the Middle Belt, the Southeast and Southsouth to form an alliance, the Nigerian Indigenous Nationalities Alliance for Self Determination (NINAS). This alliance has declared a constitutional dispute with the Nigerian State as represented by the Nigerian Federal Government. We have filed the proclamation of the dispute with the Nigerian Federal Government, the United Nations, and significant governments around the world.

” We issued the proclamation on December 16, 2020, and gave the Nigerian State 90 days to respond. As of this moment, we and the world are waiting for the response.

“We have created all of these tools for the struggle, not for our own organization Ilana alone, but for all Yoruba leaders, organizations and people.

“It now remains for all the Yoruba groups that have come to this realization along with us to band together, work together, speak with one voice and act together to achieve our sovereign Yorubaland.

Akintoye reiterated the need for focus and refusal to be distracted by anybody or anything. Those who may choose to continue to disrespect and denigrate other Yoruba persons in this struggle, and will soon see Yoruba unity marching forward to victory, and hopefully they will turn around and embrace the unity too. Those who chose to play the role of surreptitious traitors against the Yoruba struggle will soon hit the rock of failure. The path to Yoruba victory is clear and unassailable.