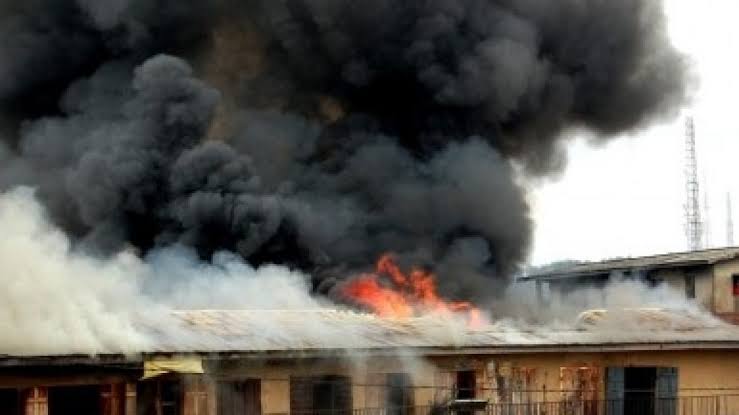 Though no life was lost, it was gathered that students and the school lost property worth millions of naira to the inferno.

The students were said to be writing exams when the fire started and couldn’t save anything from the incident.

Sources within the school indicated that the JSS 3 block was affected but occupied by the JSS 2 class as those in JSS 3 had gone home after they had finished their exams.

The sources attributed the cause of the fire to an electrical fault or power surge.

“The three hostel blocks contain over 400 students. Three blocks were affected by the fire. Most of the students’ property and provision were affected. Mattresses and beds got burnt.

“The students left for evening classes and a few minutes later, one of the matrons started shouting Fire. Everybody around had to rush to the scene,” the source said.

Corroborating the sources, the Acting State Fire Chief, Arua Nnanna in a telephone interview said “the cause of the fire has not been established, but from the report that we got from the field, we are suspecting electrical fault. At the time of the incident, the students were not inside the hostel.

“They were at the other side of the hostel doing one thing or the other because exams was going on.

“The level of alertness was so poor and it happens that there was a spark in one of the control switches. The effect of the spark caused all the electrical wire within the area to catch fire.

“The fire engulfed their mattresses, beds, and other valuables of students. The fire started from one room to the other and by the time they called, we were able to cut the spread of the fire.

“If not because of our presence, the fire could have engulfed the entire hostel blocks, but our presence limited it to a section.

“From my assessment, each of the rooms contains about 20-30 students and about 3 hostels out of 5 blocks were affected. What they had to fight the fire was not enough, even though they had a fire extinguisher.

“They don’t have an early warning system; a smoke detector. The early warning system could have helped them and the damage wouldn’t have been much. But before they could raise an alarm, the fire had already overpowered the staff and others who were there to fight the fire.”

Governor Okezie Ikpeazu commiserated with the management and staff of the federal government school over the unfortunate fire outbreak.