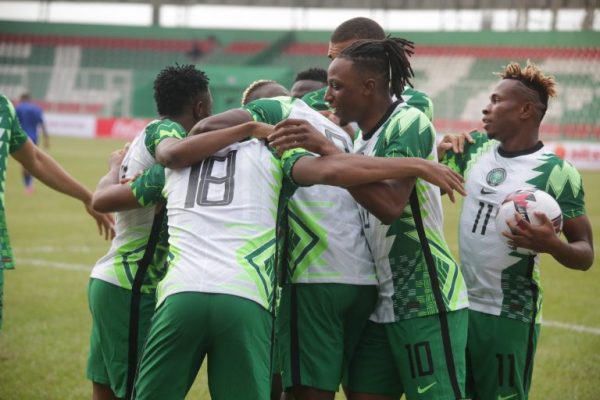 Some Super Eagles players were alleged to have organised a sex party in the team camp ahead of the 2022 FIFA World Cup qualifier against Cape Verde, a local website reported.

The site also claimed that the embattled Super Eagles coach, Gernot Rohr, was expelled for breaking the team’s curfew.

But the President of the Nigeria Football Federation, Amaju Pinnick, vetoed the decision to banish the alleged offenders from the team.

Pinnick’s interference, it was gathered, shocked the technical crew as they were all part of the decision to keep the players out of the team.

Two out of the three players ended up playing in the game.

Osasu told OwnGoalNigeria.com that the trio broke the team’s curfew, which infuriated Rohr, who subsequently wanted them out of the team, but prevailed upon by the NFF to let them play.

“We already know it’s Omeruo, Awaziem and Iheanacho. Orem is the most shameful of all because he is one of the most senior players in the team and should be showing exemplary behaviour,” he said.

He said Rohr already axed Awaziem from the starting line up with Kevin Akpoguma set to play, but had a change of mind minutes before the game, saying he has investigated the issue and the players are innocent.

The issue was seen as a distraction and the NFF order for it to be kept aside till a latter date with possible sanctions, including expulsion from the team.