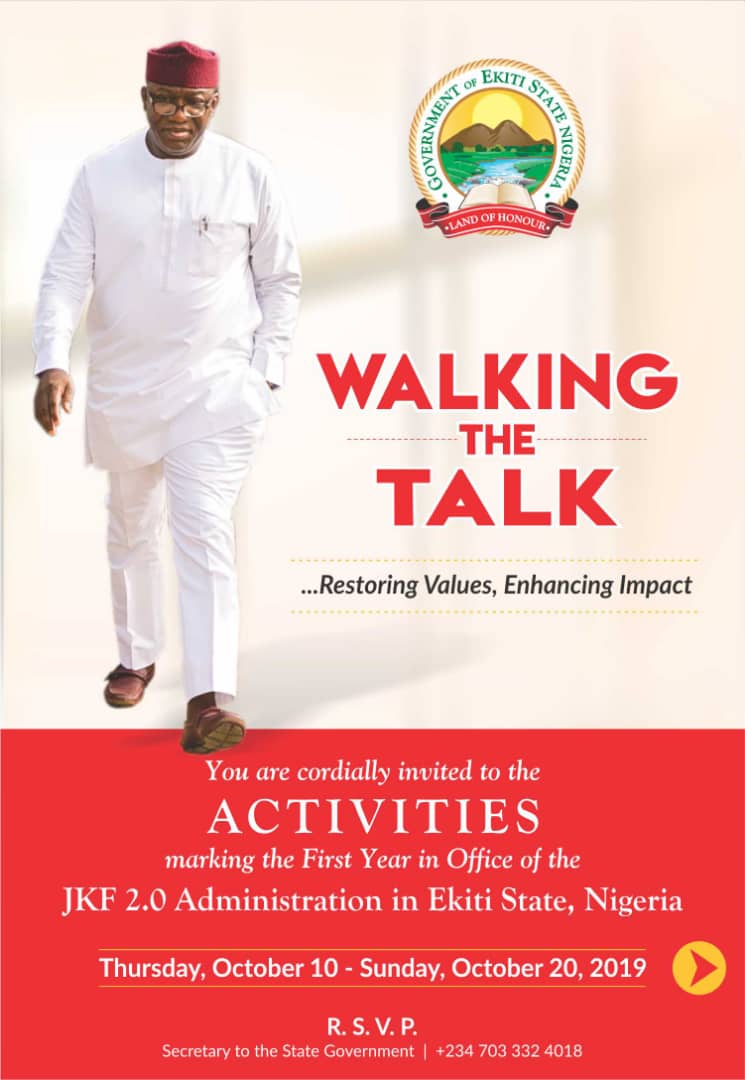 Dr. Fayemi who gave the hint during the consultative meeting with the
representatives of all towns and villages in Ekiti State, said that the all-inclusive approach to the proposed year 2020 budget will ensure that the demands of the people are collated for inclusion.

He said that arrangements have been made with the World Bank to assist
in the construction of about 1,000km rural roads and also support
channelization project across the state.
Dr. Fayemi also said that the College of Education Ikere-Ekiti will be
upgraded to a University, while teachers warfare will be taken care of
with the aim of improving the Education sector.
The Governor also said that the Primary Health facilities in the177
wards across the state will be renovated for better health service
delivery.
He assured that modern markets will be constructed in the Local
Government Areas while women will be empowered to promote the economy
of the State.
The Governor who explained that Ero and Egbe Water Dams are currently
undergoing a renewal process assured that Itapaji Dam will also
undergo necessary rehabilitation to ensure that potable water flows to
every home in Ekiti.
The Governor expatiated that with his efforts, the contractor
handling Ogbese Dam has been mobilized with 2 billion naria by the
Federal Government with assurance that work will start again very soon
in the site, saying the effort on the Ogbese Dam is to prepare the Dam
for electricity generation, irrigation and domestic use.
The Governor of Ekiti State also said that solar energy will be
introduced to the power sector in the state to improve the economy of
the people.
Dr. Kayode Fayemi explained that the state government will build
chalets for the Nigeria Army along Ikere Ise/Orun road to improved
security along that route.
Earlier, the Commissioner for Budget and Economy Planning, Hon. Femi
Ajayi stated that the town hall meeting is necessitated by the need
for all-inclusive budgetary system with a view to having a robust and
a realistic budget for 2020 fiscal year.
Commissioner Ajayi also stated that this button- up approach system
has resuscitated the belief and trust of Ekiti people in the
Government as if affords the people ample opportunities to actively
participate in the social economic development of the state.
Hon. Ajayi emphasized the objectives of the bottom- up approach in
preparing the year 2020 Budget which are
to further entrench good governance through budget discipline, probity
and accountability in the allocation and utilization of public fund;
to identify and channel resources towards the completion of the
developmental project through equitable and prudent distribution and
the allocation of the available scarce resources among others.
The representatives of each Community presented their needs to be
included in year 2020 fiscal year Budget at different times in Ikere,
Ikole and Ado- Ekiti.
The needs presented by the people ranges from road constructions in
their communities and farm steads, intra- local roads, improvement in
electricity and water supply, channelization of some rivers,
renovation of primary, secondary and tertiary health facilities across
the state and the need for construction of modern market stores among
others.