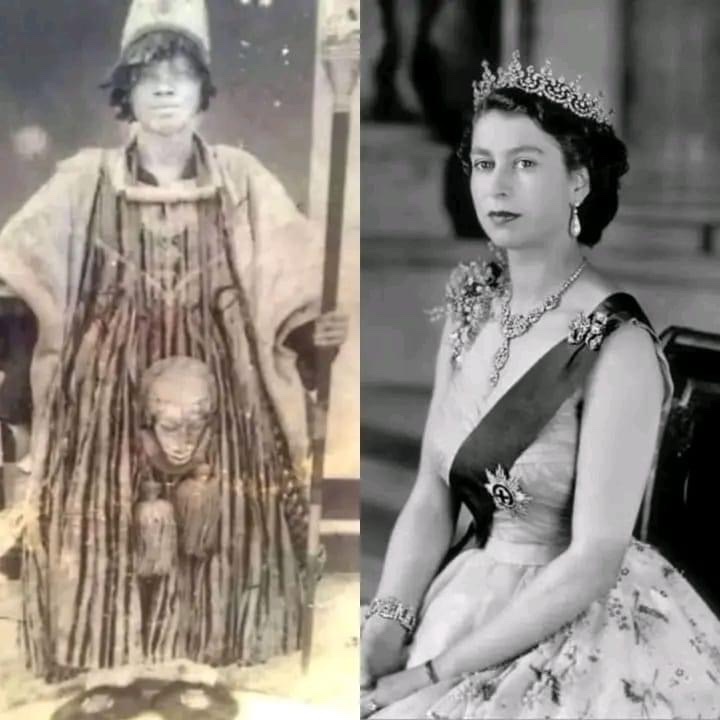 At a particular meeting held in Kaduna which consisted of all paramount traditional rulers in Nigeria and which had the queen of England in attendance, Attah Ameh was asked to remove his cap to greet the Queen of England as others had done.
It was a taboo for Attah to remove his cap in the public. According to history,The entire hall where they were staying was occupied by bees from the cap of Attah Ameh Oboni which he removed in order to greet the Queen.
The Queen of England as well as other rulers in the meeting ran helter-skelter except the friendly Oba of Benin who was asked by Attah Ameh to go out before he removed his cap. The hall became empty as some were stung by the bees and the meeting ended.
According to history, Attah Ameh Oboni was asked to be arrested and handcuffed by the security people, which they did, but the handcuffs fell off his hands.
He was later locked up in a room on the instruction of the Northern rulers and guarded by the security personnel but only to find out later by the personnel that he had left the room.

Yes, when the security were taking him to be locked up, he told his driver, Amanabo of blessed memory, to take the car and be going to Idah while the security locked him in the room.
He then warned Amanabo not to look back until he felt a cool breeze in the car. Though Amanabo argued a little that he cannot leave the Attah there but later obeyed and started driving back to Idah from Kaduna.
After some time, he felt the cool breeze in the car, and Attah Ameh was sitted inside the car.
The incident in the meeting made many traditional rulers which were mostly northerners to be angry especially making kings run in such a manner because of bees.
This became one important sin, and it was like “one sin too many”.
The queen of Englnad was also not happy and they (the Queen and northern leaders) started looking for a way to remove Attah Ameh from the throne since he was getting tougher and uncontrollable like others, as well as searching for an obedient replacement.
Igala has various cultural festivals, one of which is Ocho. Ocho is celebrated before farming starts, and it is the time that Attah Igala prays to God for sufficient rainfall, bountiful harvest, success in hunting.
It is celebrated in the bush and the venue is called Ere-ocho, where the Attah will hunt until he kills a Buffalo or a strong animal. The community in Idah where Ocho takes place is called Ogo-Efa.

He performs a little sacrifice to the ancestors using a fowl in the process, and this was to find out if there will blessings or problems in the land after the Ocho.
Before this time, the enemies at home (among the Igala people), especially those having connections with the leaders of the northern region, were working hard to get any evidence either true or false which can be used to remove him from the throne.
The blood of the animal used as sacrifice at Ocho ground now became what the enemies would use against him Petition was written by these two Igala people to the Queen and some other Northern leaders that Attah Ameh was sacrificing humans during the Ocho festivals.
Since they were looking for any means to displace him with, judgment was quickly passed that he must be dethroned, even when investigations were not yet concluded.
In addition, all the Igala cultural festivals including the Ocho were immediately banned and this remained for almost 63 years until Governor Yahaya Bello unbanned them based on the appeal of the present Attah Igala Already, before this time, the Oba of Benin who had such friction with the British had already been dethroned and banished from Benin. So, Attah Ameh Oboni knew that at that point, no matter what spiritual approach applied, it can only postpone the evil day as his enemies will never relent until he was removed by them.

The result of the blood sample which was taken from the Ocho venue and taken to University of Ibadan for analysis had arrived and it was proved that it was the blood of an animal and not human.
Sadly, the revered King, Attah Ameh had passed on before the result was brought. But Attah Ameh, being very sure that he was wrongly accused and framed up by his enemies, especially those from Igala who wrote the petition against him marking the beginning of his planned dethronement, made some pronouncements before his death.
He was allegedly quoted to have said that ” the person who wrote the petition against him would have that hand dried up, and that the leader of the gang or petitioners would be buried three times”. And they all came to pass.
While the hand dried as said, the other was buried as stated, first was the leg, second was his hand and the third was himself, all buried at various times at different locations.
In addition, as this information of his dethronement was given to him in a meeting from where he was supposed to go back to Idah and prepare to leave the throne, he stopped on the way in another Igala land called Dekina

That was where he committed suicide.
Before taking his life, he was allegedly quoted to have said that the town, Dekina will be popular but its development will not be as much as its popularity.
He was also quoted to have said that because Igala was the genesis of his ordeal, there will be disunity among the Igala people until the reign of his own blood (son) as Attah, and all Igalas irrespective of their locations will be reunited again.