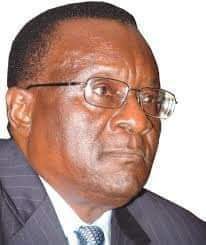 GANI, the only Comrade who didn’t take appointment from the military despite the pressure especially from IBB. IBB talked Soyinka and Solarin into joining his government but failed with GANI. IBB described GANI as one of the few Nigerians he has the most respect for. Reason: IBB has touched Gani and discovered that he was FIRE!!!!!

GANI, a direct opposite of FANI, warned his bosom friend Onagoruwa not to work with Abacha, the latter rejected and their friendship turned sour. Onagoruwa eventually disagreed with Abachas’s Autocracy…. Lol, a Military Government cannot be accused of Autocracy, its like asking why a blind man cannot see😀

Onagoruwa, a Sitting Attorney General, while still in office, held a press conference, attacked Abacha, called his New Decrees the illegality ‘that has taken away our liberties’…. Onagoruwa wasn’t touched by the military….. But his Son, a lawyer who managed his chamber in Lagos, was shot dead…. Hmmmm a man who can run smartly to enter a gourd can never take his child along…. Onagoruwa didn’t recover from it until he breath his last😭

Gani fought every government because they seemed to be the same…. However, the men in history that Gani openly canvassed for as the President were BUHARI the current President and OSHIOMOLE the current Chairman of the APC who rejected Gani’s offer and opted to be Edo Governor.

Gani might not have died when he did. Wrong diagnosis killed him. The Doctors were treating him for Pneumonia until the cancer spread beyond control!!!

Gani lived a fulfilled life! He was Incorruptible, Fearless, dogged. Always living ready to be arrested. Never ran away for anyone, never afraid of prisons, he was more inside prisons than most warders. He never spoken ill of Nigeria for once, yet he was number one enemy of bad government. He never called for revolution or Coup, yet he was a democratic, social critic…. The most famous of his names were the LAGOS LAWYER, SENIOR ADVOCATE OF THE MASSES…. etc. Exactly 10 years ago, he went for eternal rest and left us with our wahala….

There can never be a GANI FAWEHINMI again!!!