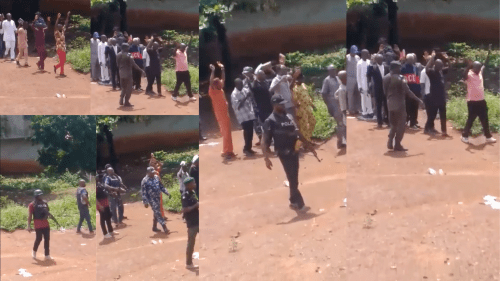 In the early hours of Sunday, Nigerian Army and police operatives attacked a church on Owerri Road in Enugu State, marching away around 50 people accused of being members of the Indigenous People of Biafra (IPOB).

The members were abusing the operatives in commando manner when they raised their two hands and were searched, according to a video obtained by SaharaReporters.

The religious service came to a screeching halt.

“The Nigeria police and military have just stormed a church in Owerri Road, Enugu State, molesting over 50 men, both old and young while matching them to an unknown destination.

“We are bringing this to the attention of the world. The lives of these men should not be wasted for no crime committed. They were only at a place of worship today being Sunday the 30th of May 2021 and no arms were found with them,” a source said.

Imo State’s Ohaji/Egbema Local Government Area and settlements in Ebonyi State are among the others.

Communities in Iriebe and Obigbo, as well as Port Harcourt and Borokiri in Rivers State, and communities in Akwa Ibom and Cross River states, were also cited by a coalition of civic society.

They had said, “Among the Eastern communities physically and psychologically targeted and attacked since January 2021 by soldiers of the Nigerian Army, Air Force and the Nigeria Police Force are communities of Ubokoro-Atta, Okporo, Uda Orsuihiteukwa and Okwudor and others located in Orlu, Njaba, Oru East and Orsu LGAs in Imo and Orsumoghu, Lilu, Ukpor, Unubi, etc in Ihiala and Nnewi South LGAs of Anambra State.

“Others raided and attacked in April 2021 include Ohaji, Osu, Agwa and Izombe, etc in Ohaji/Egbema LGA of Imo and between April and this month of May 2021, Onicha-Igboeze community and neighboring others in Ebonyi State and Etche,  Iriebe and Obigbo communities as well as Port Harcourt and Borokiri in Rivers State and several others in Akwa Ibom and Cross River states have come under heavy military and police attacks including killings and late night abduction of dozens of defenseless citizens.

“Few days ago, there were reports of resumption of military air bombardments and ground troops’ killings and abductions in the Communities of Amuzi and Odenkwume and other neighboring communities in Ihite/Uboma LGA as well as Arondizogu and neighboring others in Ideato North LGA, all in Imo.”