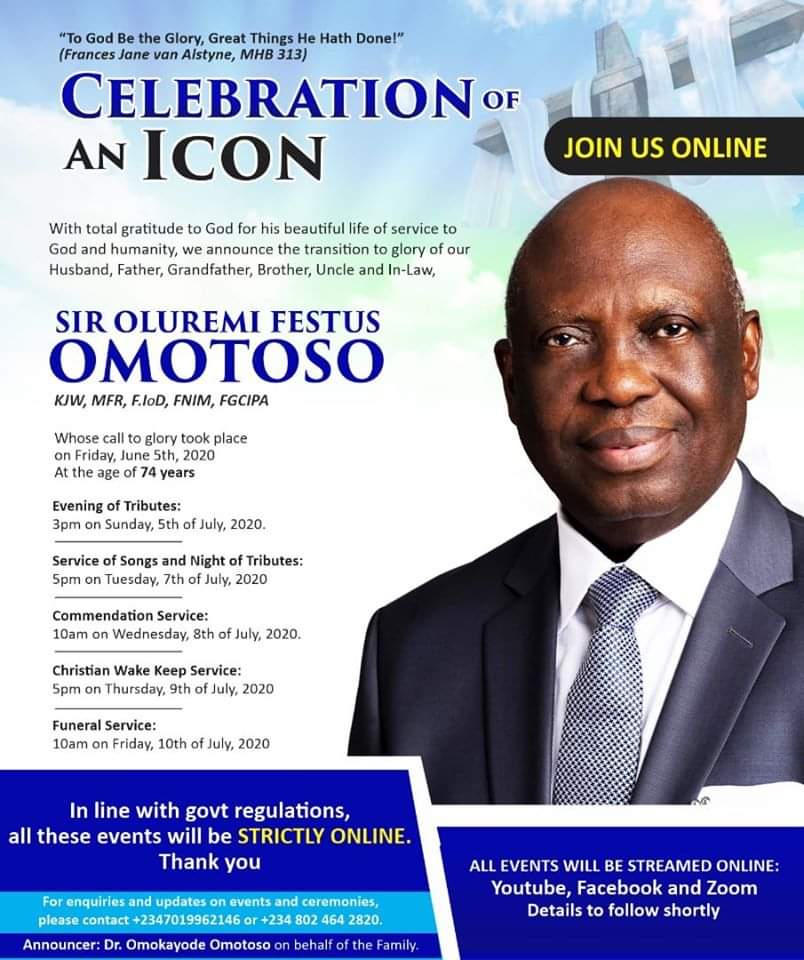 The demise of Sir Oluremi Omotoso was deeply devastating. He was a mentor, a father, and a forebear in many ways that I can’t write about him without reference to my personal odyssey. He was undoubtedly one of the most prominent indigenes of Ekiti state with global renown and impact, who has since joined the saints triumphant on Friday, June 5, 2020, and is being buried this week.

Like many people from Ekiti, even before the state was created out of the old Ondo state in 1996, I grew up hearing stories from my late father about what it meant to be an Ekiti person. Stories similar to that of Mr. Femi Adeoye, who handed his son over to state government officials for flouting the ban on interstate travel instituted in the wake of COVID 19. Sadly, there were more Mr. Adeoyes then than now – principled men and women of Ekiti origin who were called stubborn because of their honour, integrity, and passionate pursuit of the common good. H.E. Governor Kayode Fayemi has done well to make ‘restoration of values’ the central philosophy of his administration.

Early in life I learnt to love all things Ekiti. When I heard on radio sometime in 1999 that the socio-cultural association for Ekiti indigenes, Ekiti Parapo, were holding meetings at the Ikeja Airport Hotel, I made up my mind to attend. So, at 18 years old, I journeyed from 1004 Victoria Island to Obafemi Awolowo Way Ikeja, attending Ekiti Parapo meetings once every month, if I remember correctly, as the youngest member. It was at these meetings I met late Sir Omotoso, alongside Prince Julius Adelusi-Adeluyi, Architect Fola Alade, and many others. Under the guidance and mentorship of these legends I gained my first experience serving Ekiti as a volunteer in the association’s activities including the organisation of the reception held at the Club Arcade in Tafawa Balewa Square Lagos Island, in honour of H.E. Otunba Niyi Adebayo, on his ascension to office as the first executive governor of Ekiti state in 1999.

In those days, it was rather unusual for a teenager to attend those meetings with elders, even when my father was not in attendance; and though I mostly listened and rarely spoke, I was always warmly welcomed. Sir Omotoso especially took an interest in me because of the commonalities we shared including hailing from the same hometown – Odo Ayedun, and also belonging to the Methodist Church Nigeria. Subsequently, I matriculated to study Geography at the University of Ibadan, many years after Sir Omotoso graduated from the same department. It seemed like every path I have walked, Sir Omotoso had gone ahead of me. For these reasons, he was a role model and source of inspiration, and a father figure especially since my father who was his friend died in 2017.
As alumni of the same department at the University of Ibadan, I consulted with him when I became president of the student association, and he sent a representative Oloye Lekan Alabi to a departmental function he was unable to attend in 2014. His achievements in the corporate world and his admonitions provided assurances that there were diverse career options for graduates of geography due to our ability to look at the world through the lenses of place, space, and scale. His career as a boardroom titan demonstrated understanding and proficiency in the application of geography’s domains of synthesis to the private sector namely – environmental-societal dynamics relating human action to the physical environment, environmental dynamics linking physical systems, and human-societal dynamics linking economic, social, and political systems.

As a Christian and member of the Methodist Church Nigeria, he was a true definition of an elder. While, I was a nominal member of the MCN, he frequently reminded me of my heritage being the grandson of Adeleye Silva, one of the founders of the Methodist Church Cathedral of His Glory in Odo Ayedun, which he served as Baba Ijo till he died. He was very involved in the local affairs of the church, and on a number of occasions he personally called me to make a contribution when the church needed funds for a project. Humble to a fault, Sir Omotoso would personally call everyone associated with the church, old and young, to raise funds and support for the church, and was the critical link to many of us all over the world who didn’t have as much connection to the administrative affairs of the local assembly.

Beyond Odo Ayedun, Sir Omotoso served the movement nationally. He was at a point the Lay President of the Conference, serving diligently with the evangelistic fervour of John Wesley, before and after holding office. He supported efforts of the clergy to reposition the church with dynamic and resilient structures, as well as sustainable funding mechanisms, and was central to the development of the 2006 constitution. He is credited with the idea of adopting “Worthy is the Lamb” as Methodist Church of Nigeria’s slogan. He brought his humane leadership and experience in the board room to bear in advocating for better working conditions for church workers, including the establishment of pension and housing schemes and other welfare programmes. He served the church diligently with his time, talents, and resources.

As a community leader, Sir Omotoso was one of my guiding lights. I consulted with him at every milestone in my public service career, and he was always eager to offer his advice and support. In June 2014, when Governor Fayemi lost his re-election bid, he was one of those who reached out to ask if I needed any help in reintegrating into the private sector. His offer wasn’t one to be taken for granted considering his influence on the boards of many companies. He was impressed when I informed him that though I wasn’t clear what the future held at the time, I had decided to stay on with my boss because I saw my role as crucial to his transition out of office and settling into new endeavours.

What I found to be most instructive about Sir Omotoso was that he served conscientiously in spite of the fact that he needed nothing back from the community. He had zero political aspirations nor partisan affiliations, yet had incredible staying power, influence, and relevance in the state’s affairs, and was called upon to serve administration after administration in different capacities. Being on a different track having held political office in the past, Sir Omotoso’s approach has always been a check to my motives and methods of engaging with the community. I learnt from him that you should quietly make an impact in the lives of people, not because you want political mileage or recognition in return, but simply because you have been blessed by God and are in a position to be a blessing to others. The outpouring of tributes and testimonials about Sir Omotoso, especially from our hometown, is evidence that at the end of the day, people know the difference between jobbers who see the people as merchanise, and those that truly serve.

His last message to me on facebook was “O kun o, Akin. Ma gbagbe wa ni Cathedral of His Glory, MCN, Odo Ayedun-Ekiti. A proud legacy for you as your grandfather was a co-founder. Great man indeed and you are following in your family’s pedigree. So proud of you, with a promising future ahead of you. Shalom.” I will have these words framed. Sir Omotoso served. He has fought the good fight. He has finished the race. He has kept the faith. He has left a legacy, and very big shoes to fill. May his memory be blessed.