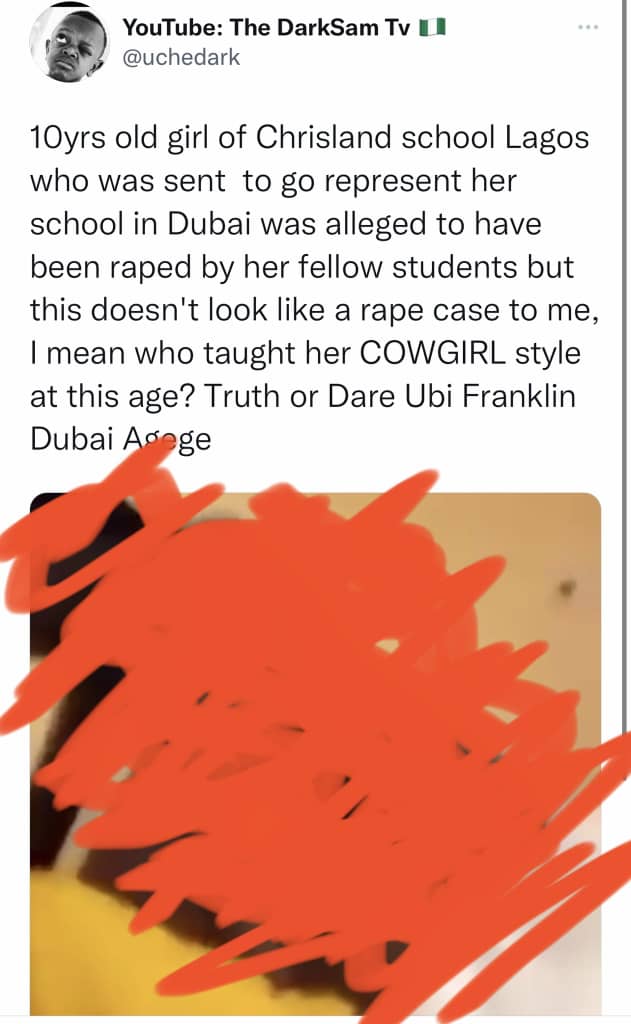 A 40-year-old broadcaster, Uche Igwe, was on Monday arraigned before a Yaba Chief Magistrates’ Court in Lagos for allegedly sharing the sex video of 10-year- old Chrisland Schools’ student on twitter.

Igwe, who resides at No. 14 Ogundare Street in the Ikorodu area of Lagos State, was arraigned on a two-count charge of cyber-stalking and breach of peace.

He added that the defendant used his personal Twitter handle, @uchedark, to share the video on the internet for public viewing without the consent of the student’s parents or the school.

The prosecutor further told the court that the defendant committed the offences on April 18, on Twitter application.

Igwe, however, pleaded not guilty to the charge.

The Chief Magistrate, Mrs Adeola Adedayo, admitted the defendant to bail in the sum of N10 million with three sureties in like sum.

Adedayo ordered that the sureties must be gainfully employed and have evidence of three years’ tax payment to Lagos State Government.

She adjourned the case until June 13 for mention.

The News Agency of Nigeria (NAN) reports that Section 24 (1) of the Cybercrime (Prohibition and Prevention) Act of 2015 provides for 10 years’ imprisonment for cyber stalking.

Breach of peace in punishable with three months’ jail term under Section 168 (d) of the Criminal Law of Lagos State, 2015.

A video clip involving five students of Chrisland Schools, Lagos, engaging in sexual activities at a World Schools Games in Dubai, went viral sometime in April on a Twitter application.

This made Lagos State Government to shut all campuses of the school, an act that has been reversed. (NAN)

Just so we all know, according to the CBN Act 2007, Buhari has the power to fire Emefiele & with ⅔ majority of the senate, he’s gone.
Fayemi meets with NE & NW National Prosperity Movement Representatives, Promises To Build APC Institute For Grooming Leaders