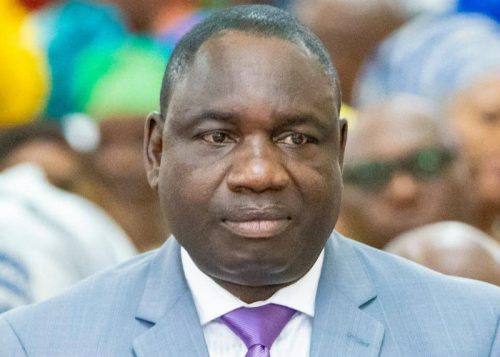 The Lagos State Government said it has addressed the grievances of medical workers in its employ, hence they should return to work.

The Commissioner for Information and Strategy, Gbenga Omotoso, said this in a statement on Monday.

The workers, under the aegis of Medical Guild, had on Monday embarked on a three days strike to press home their demands.

But Omotoso in the statement said the state government had a meeting with the workers on Sunday to address the contending issues.

He said: “A joint meeting between the Honourable Commissioners for Health, Prof. Akin Abayomi, Establishments, Training and Pensions, Mrs Ajibola Ponnle and the Head of Service, Mr Hakeem Muri-Okunola as well as all the Permanent Secretaries of the Ministry of Health, Establishment and Information, was held on Sunday the 12th July, with the Medical Guild, Association of Resident Doctors and relevant stakeholders on the proposed warning strike.

“The meeting was convened at the instance of the Hon. Commissioner for Establishments, Training and Pensions after a series of meetings held at the instance of the Head of Service on behalf of stakeholders in the State Government with the representatives of the Medical Guild, National Association of Residents Doctors (NARD), LASUTH branch and other relevant stakeholders to deliberate on the issues underlying the strike called by the Medical Guild.”

Omotoso said at the meeting, the Chairman of the Medical Guild, Dr. Oluwajimi Sodipo, appreciated the government for convening the meeting and then outlined the position of the workers and their grievances.

Omotoso added in the statement: “It is pertinent to note that the State Government expresses extreme disappointment that the Guild continued with their warning strike despite a series of engagements with the State Government aimed at resolving some of the grievances raised, noting that many issues have already been resolved, whilst unresolved issues are still being deliberated upon.

“It is worrisome that some members of this noble profession would down tool at a time when their services are mostly required. We believe this action is insensitive and lacks empathy, which our profession epitomizes.

“The State Government therefore requests the members of the medical Guild who embarked on a three day warning strike today to return back to work.

“It is therefore imperative to correctly state the facts and action on the major issues raised by the Guild with respect to some issues affecting the frontline and indeed all health care personnel:

• Health workers being unceremoniously dismissed from the isolation centres.
Mr Governor has been extremely supportive of health workers being mindful of the extreme sacrifices that healthcare professionals are demonstrating in the COVID-19 response. We are currently rotating our health workers who are engaged in providing care at the isolation facilities. They are not being dismissed, this is wrong information. Healthcare professionals are returning to their primary posting for the following reasons:

• Non-payment of COVID19 Allowances for May and June – LASG started paying extra special COVID allowances for frontline workers who are involved directly with the Lagos State COVID-19 response. This was put in place before any other State in the nation with payments as high as N672,000 per month in addition to their normal remuneration packages for each cadre and which represents financial incentives over and above that paid by the Federal counterparts. Infact, where discrepancies exist between Federal and State allowances, Lagos State has paid the difference to ensure parity. Payments for March and April were made on time however in order to ensure uniformity and accuracy of the allowances, due diligence measures had to be put in place before subsequent month’s payments were approved. As we speak these payments have been approved and being received by the workforce. Additionally, all healthcare professionals receive a hazard allowance which has been temporarily increased by 400% at the discretion of Mr Governor periodically during this period.

• Disparity in Salary for Doctors
The Skipping Policy adopted by some Federal institutions is responsible for this, as the new Minimum wage in Lagos State places all members of the State above the Federal level. Information received from Federal Government Medical Centres indicates that the Skipping Policy which places the Federal counterparts one Grade Level above the State is the basis of this disparity. It is important to note that this is not in conformity with the Scheme of Service agreed by the National Council of Establishment and is a subject of litigation in the Federal Court of Appeal and therefore the State Government cannot implement such a policy until Judgment is delivered.

• Heavy Taxation of Health Workers –
It was made clear to the Guild that the Personal Income Tax Act is standard to all and calculated on the basis of the tax table. A meeting has been scheduled with Officials of LIRS for this week with a view to exploring ways of reducing the tax burden. Mr Governor has also approved the exemption of the Hazard allowance from tax for State health workers.

The Lagos State government, recognizing that the State is at the epicenter of the COVID pandemic in the nation has gone over and beyond its duty of care to ensure that the welfare of the Medical workers in the State is placed as top priority. Apart from the above measures, the following measures have also been put in place:

• Separate isolation centre for health workers who test positive – an isolation centre has been opened in Agidingbi to cater exclusively for the care of healthcare professionals.
• Inclusion of Medical Guild in Emmergency Operation Center (EOC) – The members of the Guild have always been part of the EOC, and their participation has been strengthened recently.

• House officers April Increment in hazard allowance –all house officers. They have all been paid an increase in hazard allowance.
• Accommodation of Health Workers – From the beginning of COVID19 we have accommodated all frontline health workers in hotels at great cost and provided three meals a day and transportation to and from the hotel.

• Shortage of health workers – Mr Governor has given approval for Health Service Commission to employ over 760 health workers of which at least 400 are doctors. However due to the pandemic we have had to adjust the recruitment procedure, but the process is ongoing and we are expecting to conclude the first batch of recruitment within a month from now.

• Construction of Doctors Quarters in LASUTH – work has commenced to ensure Doctor’s Quarters are built in LASUTH as well as a new strategic policy to increase and improve housing across all State Secondary Healthcare Facilities.

“The State government will continue to play its part in ensuring the battle over COVID is won, under the able leadership of Mr. Governor, Babajide Sanwo-Olu and urge the Guild to continue to take full advantage of the dispute resolution processes provided by the State to resolve all issues bearing in mind that these are unusual times for the nation and the entire world.

“The government therefore wishes to assure citizens that while negotiation is ongoing, services at all state-owned health facilities can still be accessed.”